Themes and contexts of his four projects at the Central Asian Pavilion, Venice Biennale 2011. 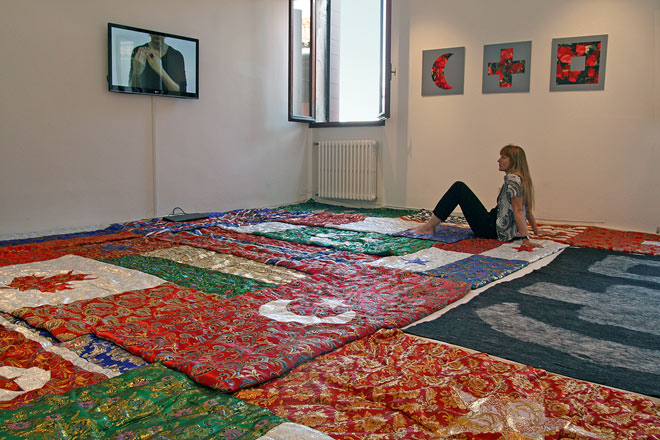 Located at the intersection of Chinese, Indian, Turkic, Iranian and Russian worlds, as well as in the zone of interaction of four world religions, Central Asia has always been an arena of metissage. 'Modern times' were also not an exception, which enabled Russian-European art to be painted on Central Asian palimpsest. After the collapse of the Soviet Union, the official ideology of post-Soviet states in the region proclaimed the slogan of returning to lost roots, and the authorities, with the help of improvised artists, began to hastily erase signs of the colonial and Soviet past. Despite this fact, many artists chose the opposite paradigm. For them, Russian-Soviet art and, in particular, the legacy of the Russian avant-garde remained a major source of creativity that did not exclude an appeal of both key themes of historical art of the region and problems of international art. A strategy of inclusivity became the aesthetic roots of their choice, as the principal means of artistic expression - patchwork, superimposing, overlapping, cohesion, a combination of heterogeneous and randomly combined elements. Said Atabekov is one of the most notable artists of the last decade working in this direction. Describing his latest projects, one could likely say that he is working on creating a Central Asian dialect of visual Esperanto, which, in light of the dominance of Orientalist and self-orientalist discourses in Central Asia, can be objectively attributed as 'Anti-Kipling'.

The exhibition Lingua Franca featured in the Central Asian Pavilion of the Venice Biennale 2011, presents four projects of the artist - Bosphorus Prayer (2007), Red Cross (2010), Farewell of Slavianka (2010), and Korpeshe-Flags (2009-2011). Each of these, in its own way, perceives the possibility of a mixed language in the matter of trans-cultural communication.

The project Bosphorus Prayer features a woman conducting prayer-like ritual gestures, which reflect ambivalence and uncertainty. A closer look captures the gestures of praying in the movements of her hand, both Islamic and Christian at once - she makes a cross, but her hands are held as Muslims do. It does not matter whether this is an act of profanation of ancient sacredness or sacralization of today's profanities. More important is the contextual relevance that evokes those 'trans-cultural epochs' in the development of Central Asian art, when lines originating from different sources united in a single artifact. It is enough just to recall the era of 'Greco-Bactrian', 'Kushan-Bactrian' or 'Indo-Kushan' art. However there is also a considerable difference; while these trans-cultural phenomena were the result of a natural convergence of two or more collective sources, Bosphorus Prayer was born as a result of a personal mixed-cultural act. In communicative terms, this strategy is effective. The ritual, captured on video, is read and understood on both sides of the symbolic 'Bosphorus' which ceases to serve as a border between religions and cultures, but becomes a binding bridge.

The installation Korpeshe-Flags is interesting, primarily because of its hybrid objects - korpeshes in the style of flags - with which the artist occupies the exhibition space. Korpeshe is a traditional form of Central Asian textile, which serves a dual function of mattress and blanket in the tents of nomads. These flags of European countries, made of patterned fabrics, could be perceived as a literal expression of mixed languages using symbols of the 'West' (represented by national state symbols) and the 'East' (stereotypical arabesque pattern). Perhaps such an interpretation would satisfy official orientalists or enthusiasts of the 'historic reconciliation' of East and West, - "never the twain shall meet". [1] However, the case of Said Atabekov's needs more clarification. Firstly - and this is even more evident in Venice, which is probably the most richly decorated and adorned city in Italy - arabesque, which arrived from the Persian miniatures and Byzantine, has become an integral part of classical Italian art along with the classical art of the West, since the early Renaissance [2]. This means that it is not about connecting two 'disparate' sources, but about combining the already mixed and remixed. Secondly, it is impossible to ignore the fact that Korpeshe is a part of a nomad's everyday life, whose figure has become an emblem of our time through the works of Deleuze, Guattari, Derrida and many others. A nomad is not tied to a territory, can move in any direction, is open to all winds, and is not subject to any nostalgic trauma. For him, national borders and symbols, such as flags, have meaning only in one sense: how to cross them in order to move on. Therefore, state attributes on the flag-Korpeshes change while the trans-cultural patterned background remains unchanged. Thirdly, we should note that the image of the Nomad, which stands in the background of Said Atabekov's installation, does not coincide with the exotic-Central Asian art. It is given that the artist is aware of the attractiveness of his work, which is often perceived by the viewer as a mystical and lyrical revelation. And the principle of mixing when creating an image indeed allows Atabekov to introduce elements of shamanic, nomadic or Sufi creativity into his projects. However, the presence of self-destruction, irony and diverse intellectual connection in the artist's works has more in common with nomadism of Deleuze than with the nomads of pre-colonial Turkestan. Deleuze believed that in order to become a nomad, today it is not at all necessary to travel - "there are trips that take place on the spot, trips to intensity" [3], taken in the quiteness of one's study. Said Atabekov, along with Korpeshes, keeps an empty case of Kalashnikov assault rifles in his 'study'. Quiet is relative here and the non-conflict of universal crossover is ephemeral.

The project Red Cross is characterized by a double game in the spirit of Arcimboldo, with superimposed layers of different characters. Archetypal images of the Russian avant-garde are apparent: a square, cross and circle (in fact, if the cross can be understood as the merging of two rectangles, then the crescent is obtained by the subtraction of one circle from the other). Precisely these forms appeared as sacred symbols of the new artistic doctrine, first at suprematic exhibitions, then on the tomb of the patriarch of the movement. However sacredness and iconicity of these signs, underlined by the transformation of the circle into 'Islamic' crescent moon, is filled with new meanings in the project. The Russian avant-garde sought to exclude associations of colored geometric shapes with any 'forms of life' - though here, when taking a closer look, these forms are executed using photo images of poppy fields. The reality of colored panes becomes a base for the illusionary, life-like images, revealing the relative truth of both layers of the images. It reminds the viewer of the post-suprematic deconstruction of the 'real', seen in the later works of Malevich, in the 1930's. In the meantime, the iconography of the project includes solid referential clichés associated with poppies - from the blossoming Eurasian steppe, to the Afghan poppy plantations, bringing heroin dividends. We need not forget that the ancient Greeks already considered poppies as symbols of Hypnos and Thanatos, the gods of sleep and death. These values are assigned to this flower in many cultures, including Central Asia . Therefore mixing and overlapping layers of meanings predetermine the transparency of the issues addressed in the project.

The project Farewell of Slavianka [4] is a slide show presenting an unusual ritual. According to Said Atabehov, the captured action was carried out by his Kazakh relatives, trying to find traces of the artist's great-uncle, who went missing in 1943 during the Great Patriotic War. At first the villagers made a special object - a 'carpet' with the same half-sacred, half-suprematic images of a crescent, square and circle, which are parts of the previous project, followed by a ritual procession of the object.

The slide show connects several languages. Firstly, it is the language of the newly-created ritual itself, which retains characters of Islamic memorial ceremonies, as well as possibly some of pre-lslamic origin. Secondly, the medium of photography evokes, as if in a mirror, a reflection of photographer Max Penson, an important figure in Central Asian art. In Penson's photographs, Turkestan appears to be imbued with freshness and, at the same time, with alarming discourses of the early socialist era. It is typical for him to mix 'diagonal compositions' of Russian Constructivism with local traditional 'texture', which is, however, devoid of Orientalist 'spices', as the photographic material is not exotic for the artist, but part of his everyday reality. The third element is the 'carpet', which is obviously an artifact of Said Atabekov - symbols of major world religions, especially in the form of tombstone markers and sacred objects have long entered the vocabulary of the artist. And finally, the fourth and especially important element is the specific language of cinema, transforming the inter-media slideshow into a spacio-temporal piece of art, including sound.

Stravinsky once likened the music of films to wallpaper decorating rooms, and probably mistakenly, because metaphysically speaking, sound reaches the 'soul' and human emotions incomparably faster than image [5]. As a lingua franca, melody is often much more effective than visual images and, especially, words. It is sufficient to give the example of the song, Lili Marleen, whose 'fascist German origin' has not stopped it from spreading in the midst of the war in many languages, and basically among the opponents of Germany. It is, however, unlikely that this song will ever have a visual or verbal competitor.

In Said Atabekov's project the melody, Farewell of Slavianka, could be considered a pan-Slavic and pan-Soviet version of Lili Marleen. A common theme in war films and an especially indispensable attribute of farewell scenes at train stations (as in Kalatozov's film The Cranes are Flying), the song, Farewell of Slavianka being strongly incorporated into the slide show, radically changes the meaning and perception of the ritual that was recorded by the artist. This is not a musical illustration and definitely not a 'wallpaper', but rather it is a counterpoint against the Asian-NOT-Slavic context. But perhaps this is the plaintive element in the project that activates feelings of the viewer, regardless of their origin and cultural background. The melody is well-known, it has strong associations, and 'basic emotions' are similar all over the world. If we accept the idea of Ernest Ansermet, claiming that "feeling, as such", is a "musical sense" [6], and contrast it with Adorno who proposes that music is similar to languages, but "music is not language" [7], we can confirm that in this case, a well-known world 'hit' translates the artifact into a universal context of lingua franca.

However, in fact, Adorno's vision of music is almost identical to how Benjamin understands 'pure language': "Music refers to true language: the language, which would include a revelation for the speaker himself, at the expense of the uniqueness of the thought identifying the speech." [8] The Babylon circle is closed so that it can be unlocked again.

The text is part of the essay "Mixed Language", published in the catalogue of the exhibition "Lingua Franca", Central Asian Pavilion, 54th Venice Biennale 2011.