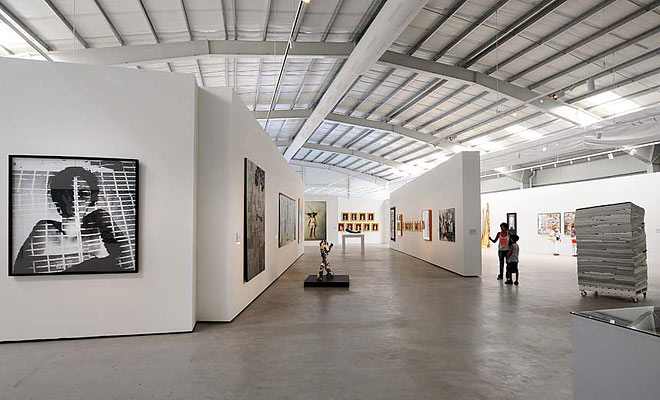 Organizing an exhibition of contemporary art that is named for, inspired by, or representative of a nation-state is a dicey endeavor anywhere in the world. In a country as fractious and fractured as Lebanon, it can easily become an exercise in existential dread. For that reason, the organizers of "Rebirth: Lebanon XXIst Century Contemporary Art," which opened at the Beirut Exhibition Center (BEC) on June 16, deserve credit for braving and then barreling through any and all possible identity crises. Janine Maamari, a veteran collector, and Marie Tomb, a young art historian, have produced a hybrid of a show that sets down a baseline of interest in national representation but then wanders off into a thicket of far more interesting variations on a theme.

With the works of 49 artists arranged in three wide corridors that run more or less diagonally through the BEC’s airplane hangar-sized space, "Rebirth" covers a great deal of ground. The generational spread alone runs from the twentysomething Abdulrahman Katanani’s Rebirth, 2011 (a wall sculpture made from a refugee camp's corrugated tin roofs, depicting five young children at play) to the octogenarian painter Huguette Caland’s Beirut, 2010 (a densely patterned work in mixed media on canvas that looks like a narrative tapestry).

Although there was no production budget for the participating artists, most of them created new works for the show. Thankfully, very few made explicit reference to the phoenix rising from the ashes, that most tiresome cliché about Lebanon, which likens the country to a melodramatic bird torching itself every 500 years to birth its young by fire. The sculptor Mireille Honeïn opted for another myth altogether, creating a mannerist Icarus with a torso of twisted bronze, bionic legs, and a curiously withered set of wings.
Several younger artists delve into more localized myths. Mohamad-Saïd Baalbaki’s hauntingly simple bronze sculpture of a dismembered arm, One Hand Alone Can’t Clap, 2007-2010, from the ongoing "Libanisation" series, alludes to both a common proverb and the four-figure monument on Martyrs Square in Downtown Beirut, which was heavily damaged during the civil war, removed for years, and then returned to the site with its bullet holes and missing limbs preserved to memorialize the conflict.

Alfred Tarazi, meanwhile, revisits the sordid history of the hotel wars, in which various militias holed up in Beirut’s luxury hotel district to snipe at one another during the civil war. Tarazi’s Tunnels and Love Nest, both digital prints on aluminum dated 2010, superimpose a beautiful young woman’s portrait over the wrecked façade of the old Holiday Inn, part of a larger project, leading toward a feature film, telling the fictional story of two star-crossed lovers named Farid and Farah who were killed in 1982.

Digging back further in time, Marwan Sahmarani – one of several artists who has used the show as an occasion to experiment with something new or reflect back of their practice – has contributed a collection of eight portraits of mustachioed men, each wearing a red fez, who are posited to be unknown painters who lived in the Levant in Ottoman times, a playful inversion of the idea that the life stories and personal narratives of artists from Lebanon have often been the stuff of local art history, more so than their actual work. In Sahmarani’s series, painting is restored as the vessel best equipped to carry meaning.

In the catalogue that accompanies the show, Tomb runs through many of the potential pitfalls inherent to organizing a show of Lebanese contemporary art in an essay that tackles, first off, the question of whether or not there is any such thing as Lebanese contemporary art at all. The ultimate answer – that what unifies artists from Lebanon and the Lebanese diaspora is the sheer diversity of their work – may be something of a cop out.

But "Rebirth" is nonetheless intriguing for the wildly divergent directions in which the selected artists have taken the theme, from meditations on fertility and fecundity (from Zeina Assi’s portrait of a mournful pregnant woman, her elongated body faintly reminiscent of Egon Schiele, filled with images of graffiti, stencils and other examples of Beirut-based street art, to Ara Azad’s hilarious back story – a global romp through sperm banks, egg donors and fertility clinics on three continents – for his sculptural assortment of eggs nesting in aluminum, copper, luffa and steel) to works interpreting "rebirth" to mean memory, appropriation, metamorphosis, the passage of time and ruminations on sex, death and violence.

Carved out of the collapsing Ottoman Empire and managed as a French Mandate until it became a republic in 1943, Lebanon has shown a remarkable propensity for instability, self-destruction and strife in the seven decades since it gained independence. At the height of the 1975-1990 civil war, which wasn’t the first or, many would argue, the last, the historian Kamal Salibi wrote that "in all but name, Lebanon today is a non-country." Despite two decades of reconstruction, one could easily make the same observation now. Just as national unity has proven a slippery fiction, national identity remains an agitated and unsettled issue.

None of this has prevented the emergence of a contemporary art scene that exerts an influence in the region that is almost comically disproportionate to Lebanon’s diminutive size. Beirut harbors a critical mass of artists and independent arts organizations, and it has witnessed a rich and varied history of exhibition making over the last twenty years.

But Lebanon’s endemic identity crisis does go some distance in explaining why so few shows of modern and contemporary Lebanese art have materialized, particularly in Lebanon itself. The few landmark shows that have taken place have been, for the most part, staged abroad – in Paris, London and most recently Washington DC. No matter how well intentioned, such shows are ambassadorial gestures, motivated by the desire to show Lebanon to the world as something, anything other than a basket case.

Inside the country, that pitch is a much harder sell. The only institution that has taken the pulse of the Lebanese art scene year after year since the 1960s is also the most anachronistic – the annual Salon d’Automne, organized by the Sursock Museum and a relic of nineteenth-century thinking. At times, "Rebirth" looks too much like a streamlined, upgraded version of the salon. And absent from the exhibition entirely, of course, are those internationally acclaimed, critically minded Beirut-based artists for whom any show based on national representation would be a non-starter, and the BEC’s status as a project by Solidere – the private real-estate company in charge of Beirut’s reconstruction process – a serious political problem. "Rebirth" isn’t always subtle, and it walks a few too many fine lines all at once without shedding light on their implications. But in terms of bringing very different artists together, assembling a tight selection of works, and avoiding the bog of identity politics, it is, in many ways, more generous than previous such exhibitions when it comes to what contemporary art in Lebanon is and could be.