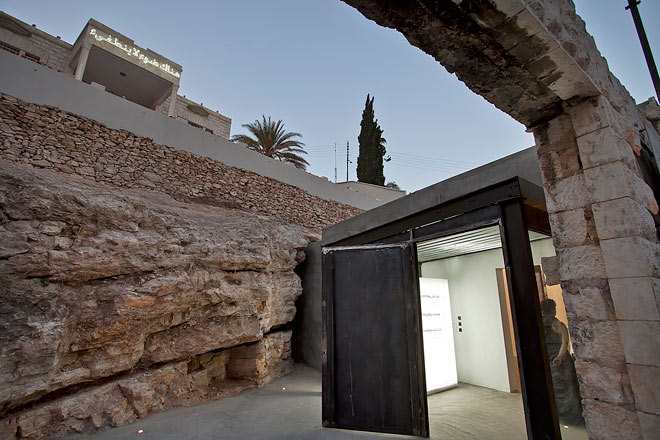 Named after the patron of Darat al Funun, The Khalid Shoman Foundation has, since 2002, dedicated it's efforts to promoting the visual arts from the Arab world and supporting institutions in the fields of education and health. On the 7th June, with the opening of the exhibition Out of Place, the Foundation inaugurated a newly restored building from the 1940s to house its headquarters. At the same time it inaugurated The Lab, an experimental space housed in a restored warehouse to become a hub for innovative ideas and production for artists and researchers. At The Lab, an on-line database on Arab artists and Darat al Funun's digitalized archives will provide additional resources for information and research. Additionally, the Foundation announced The Darat al Funun Dissertation Fellowship for PhD candidates for the study of Modern and contemporary art of the Arab world.

Out of Place is an exhibition that has arisen from a collaboration between Tate Modern, London, and Darat al Funun, Amman. Curated by Kasia Redzisz and Ala’ Younis, it features four artists from different backgrounds whose diverse political and social circumstances have prompted them to consider their environment. The artists in Out of Place each explore the relationship between dominant political forces and personal and collective histories by looking at urban space, architectural structures and the condition of displacement.

Hrair Sarkissian’s In Between 2007 is a series of large-scale photographs of austere Soviet-style buildings left abandoned in the dramatic hills and valleys of rural Armenia. They register the paradox experienced by this Syrian artist of Armenian origin of ‘returning’ to a land which he had only known from family stories, as the reality of the region replaced the country he had imagined.

In The Valley 2007-8, Ahlam Shibli explores conditions in the village Arab al-Shibli, where Palestinians living under Israeli jurisdiction face relocation from their land. In Goter 2002-3, she looks at the lives of Palestinians of Bedouin descent from al-Naqab (Negev).

In the 1970s, Ion Grigorescu began recording everyday scenes in his home city of Bucharest with an 8 mm camera. In his films and photographs he focuses on the unregimented activities taking place amid the rapidly changing urban landscape. His images of children playing, as well as of haphazardly discarded objects, contrast with the uniformity of the surrounding architecture from Romania’s Communist past.

Cevdet Erek’s Shading Monument for the Artist 2009 reflects more generally on the possibilities of political art. The shadow-sculpture casts text on the gallery wall with varying intensity throughout the day; the words have been taken from memorials to those who fought in the Spanish Civil War. Appropriating these words for his artist’s monument, Erek blurs the status of political activism and artistic action.

(From information of the organizers)
12 image pages, more info