Discourses of cultural identity as an aesthetic rebound. Two exhibitions of the artist in Berlin. 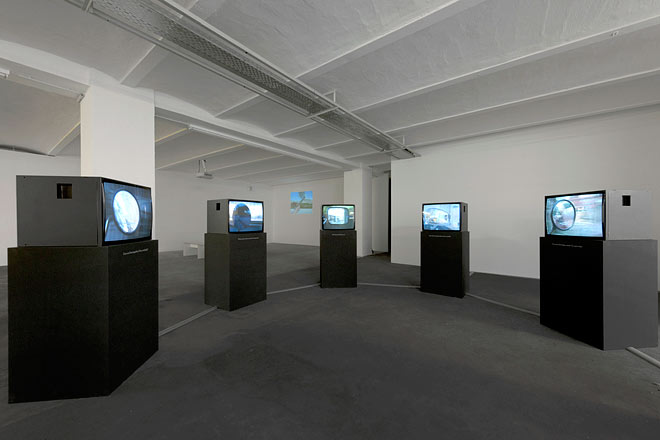 Nevin Aladağ can look back on a many-faceted and extensive oeuvre. This year it is present in Berlin in two solo exhibitions: Dim the Lights 6:07 min in TANAS, which showcases contemporary Turkish art, and beginning in September 2011 at the Galerie Wentrup with its showing Rallye. A continuing strength of the work of this artist who was born in Turkey and grew up in Germany is that it accommodates and seems to serve the gaze of the viewer’s often immanent search for dealings with cultural identity. Aladağ does not necessarily reduce this search to absurdity, but skillfully points it in other directions. With Aladağ, cultural identity often becomes an eye-winking background noise for a media-reflective and aesthetically complex body of work. Her pieces not only seem to be tired of being categorized in "migrant" interpretive frameworks, they adeptly redirect such schemata toward the viewer, showing the latter at precisely this moment that she operates on diverse other levels.

At the exhibition in TANAS, Aladağ presents for the first time a macramé piece knotted in wire rope. Wide-meshed, the artist has arranged it to hang freely in space, so that the viewer can walk all around it. The light-reflecting material is staged in front of a yellow wall, coaxing ever new color effects from it. If we view the macramé from a distance, it seems silvery; if we look through it into the room, the wires reflect the yellow wall behind us and turn golden. Aladağ addresses aspects of visibility and concealment, which (through allusions to domestic labor and gender-specific, spatial connotations) are tied to concepts of exterior and interior. Beyond that, she presents her macramé to us through a material-aesthetically unaccustomed glimpse of a cultural technique, normally located in textiles, that the viewer probably associates with the vague and constructed geographic space of the "Orient" – even 30 years after the publication of Edward Saïd’s Orientalism. This is Aladağ’s starting point: the knotting patterns of her macramé are visual expressions of the pattern inherent in the wire rope itself. Like each of the pieces of wire rope, each individual strand consists of several threads that in cross-section produce a specific pattern. Aladağ imitates this invisible structure in the knotting pattern, thereby giving visibility not only to the handicraft; she also manages to give the internal structure of the wire rope a visually comprehensible form that arises from itself and to reveal the structural core of the medium. The macramé piece refers to nothing other than itself.

Aladağ’s series of variously sized carpets, Pattern Matching (2010), operates similarly. Shown in the presentation mode of a painting on the wall, her diverse carpet pieces evoke aspects of collecting precious items of the Orient. But the seemingly authentic products of a specific cultural realm are in reality collages of carpets of varying origin, ranging from Afghan, Iranian, and Turkish kelims to industrially produced carpets from Germany and China. Aladağ now arranges these historically and culturally extremely diverse components in the form of overhead views of basketball courts. Woven arenas and textile playing fields arise before the eye of the beholder; suddenly they have less to do with the construct of the Orient than with a pop-cultural athletic export hit from the United States of America.

The discussion of cultural identity and its societal and artistic role has certainly lost none of its urgency. Nonetheless, there seems to be a generation artists in the diaspora or with migrant background for whom an exclusive classification in this category has become a barrier that prevents their works from being read in other theoretical contexts. Aladağ’s achievement is that she neither ignores nor openly battles against this relatively recent reception-historical dilemma: she integrates this problematic as a strategy in her works, picks up the (Western) viewer from his own stance of expectations, and at first glance gives him what he is looking for. On this basis, she enables him to first gain access to the many other ways of interpreting. This productive confusion is inherent in many of her works, and we soon find ourselves in front of what seem to be Oriental weavings whose actual center is a self-reflection of the medium, or we stand in front of carpets whose spatial subdivision is based on the court of an American ball game that has very little to do with the supposed cultural authenticity of a Persian carpet. These are the moments in which Nevin Aladağ returns the ball of the identity discourses to their real addressee, the Eurocentric viewer, and allows him to see more than he did before.

Art historian and author, based in Berlin, Germany. 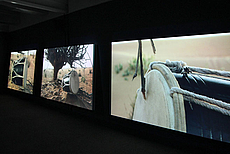