Interventions in the public space of Nablus by artists from Palestine and other countries. Cities Exhibition, 3rd edition. 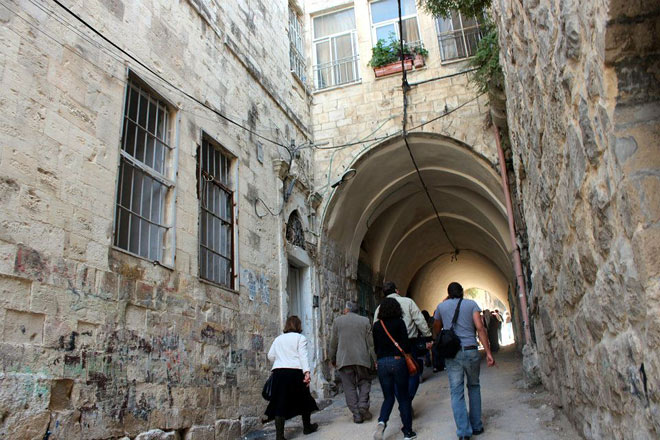 Nablus ‘Neapolis’, the new city of Vespasian; the Shechem of Abraham and Sara in the biblical land of Canaan; a city that has witnessed its destruction and resurrection twenty two times flanked by its guardians mount Gerzim and Ebal. Nablus of the Abbasids and Ottomans, a Palestinian city that stubbornly withstood wars, resisted occupation, Nablus ‘Jabal el Nar’, is where present and history coexist; and where cultures intertwine leaving traces of splendor and change on architecture, art, cuisine, and social structure.

Cities Exhibition produced by Birzeit University Museum, is a venue for artists to explore the rich social history of Palestinian cities in relationship with nowadays contemporaneity and what entails from change in the social, economic and spatial processes and practices. The learned helplessness syndrome that the Palestinian society is suffering from featured by self-confinement in cities and unwillingness to connect and explore the richness of culture and history of their own geography have caused a change in the values system, a disconnection from the landscape, the corrosion of heritage and the social isolation of cities from each other. Accordingly, the exhibition is an annual project that attempts to draw attention to a variety of relationships between people and place and time, keeping the cadence and uniqueness of each city, moving from the past to the present through the narrative of time. The idea of the project is beyond just the stereotypical representations of nostalgia and folklore, it is by itself an attempt to putting in juxtaposition, past and contemporary visual and cultural evidence, not only to affirm the uniqueness of those cities, but to challenge the issues of memory, identity and change as well.

This year’s 3rd edition of Cities Exhibition takes Nablus as its site of investigation. The artistic interventions of ‘Between Ebal and Gerzim’ the title of this edition are an endeavor to respond to the city’s contemporary challenges through reconnecting the current contemporary social practices with the historicity of the geography and its collective memory. Art is not considered in this exhibition as the reproduction of existing folkloric or contemporary aesthetics as much as an intervention in the city’s sociopolitical domains. It is the challenge of bringing back the collectivity of experience to public space, in an effort of disclosing knowledge and reconstructing the significance of what has been marginalized. ‘Between Ebal and Gerzim’ is not branding what is already known, nor is it replicating stereotypes on Nablus, it is an archeology of knowledge on issues of change and transformation. It is also a way of alerting the notion of pertinent contemporaneity in connection with social history.

This year’s curatorial directions emphasize certain semantics and synonyms as a foundation for exploring Nablus. Words such as questioning; inquiring; revealing; amassing; problematizing; researching; defining; and defending has been basic tools for artist to play with and forge their artistic concepts.

Introducing international visual artists for the first time this year in Cities Exhibition has the added dimension of lifting the isolation that Nablus has been subjected to for decades now. Matters of loss and recovery are becoming so entrenched in today’s polemics. Contemporary art is focusing more and more on universal shared issues using multi-disciplinarity in the process of creation. Also the new forms of visual expression in art such as media, installation art, video, photography, art in public spaces, are easily disseminated and shared and allow more channels for exchange, dialogue and critique.