Nafas Art Magazine is media partner of several exhibitions and pavilions at the 54th Venice Biennale. 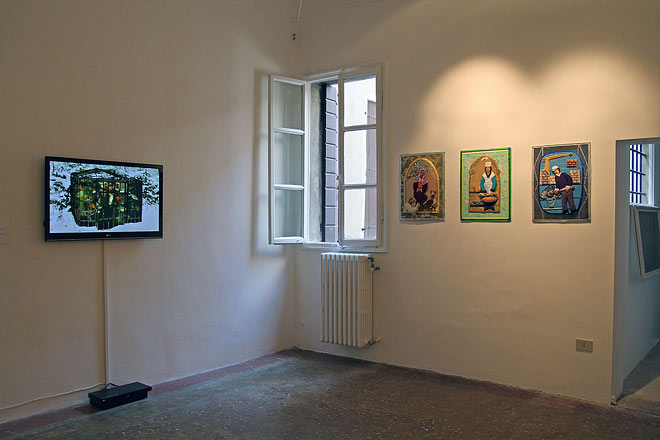 This year for the first time Nafas Art Magazine, alongside Universes in Universe, directly cooperates as media partner with several exhibitions and pavilions at the Venice Biennale. Most of the artists participating in these shows already appear in Nafas in previous contributions about group exhibitions or in monographic articles. In the next months, more participants of these exhibitions will be presented with special features.

Nafas is media partner of the following exhibitions and pavilions of the 54th Venice Biennale:

Egypt's national Pavillon in the Giardini, which used to be reserved mainly for artists / functionaries of the Ministry of Culture and their circle, honores this year the work of one of the protagonists of the revolutionary movement and of a new artist's generation. Ahmed Basiony, who was killed at the end of January 2011 on Tahrir Square, was a pioneer in creating experimental sound art works and interactive multimedia installations.

Ahmed Basiony
At the frontline of the arts and revolution. Projects, teaching, last days. In Memoriam. By Shady El Noshokaty. With lots of photos.

Related articles in Nafas, among others:

Edge of Arabia: Terminal, 2011
Art from Saudi Arabia, curated in Dubai by Bashar Al Shroogi, as a real-life airport experience.

Kader Attia
The Small Dome of the Rock. Poetry and reflection in a contemplative space. By Laurie Ann Farrell, March 2010

500 meters of silence
Essay about the installation by Mounir Fatmi (Morocco), shown in the exhibition "Nafas". By Evelyne Toussaint, May 2006

Golden Lyon for Emily Jacir
The Palestinian artist received one of the main awards of the 52nd Venice Biennial. Oct. 2007

Emily Jacir: Where we come from
Wishes from Palestinians in exile are realized by the artist in their homeland. By Gerhard Haupt & Pat Binder, Oct. 2003

Related articles in Nafas, among others:

Morocco - Country Archive
Articles on the arts of Morocco in Nafas Art Magazine, incl. exhibitions, artists, galleries, institutions, etc.
L'appartement 22
Interview with Abdellah Karroum about his independent art space in Rabat. By Pat Binder & Gerhard Haupt, Nov. 2005
Sentences on the banks and other activities
Exhibition 2010/2011 in Amman, Jordan. Curatorial text by Abdellah Karroum and photo tour.
AiM Biennale Marrakech
Review of the visual arts exhibition, curated by Abdellah Karroum. With an extensive photo tour. By Zineb El Rhazoui, Dec. 2009
Younès Rahmoun: Wahid
Performance and video by the Moroccan artist in the context of his development and current work. By Abdellah Karroum, Jan. 2006

Contributions in Nafas include:

Central Asia - Country Archive
All articles about the arts of Central Asian countries in the Nafas Art Magazine.
East of Nowhere
32 artists and groups from post-Soviet Central Asia at the Fondazione 107, Turin, Italy. July 2009
Kyrgyzstan 2010
Art from Kyrgyzstan, including some artists from Kazakhstan, Uzbekistan, Germany. By Birgit Hussfeld, Sept. 2010
In the Shadow of "Heroes"
2nd International Exhibition of Contemporary Art in Bishkek Kyrgyzstan. November 2005
Red Star - Blue Dome
Art and architecture in Central Asia, ifa-Galerie, Berlin. Photo Tour through the exhibition by Gerhard Haupt & Pat Binder, March 2004
Yerbossyn Meldibekov
The polemic artworks of the Kazakh artist. By Valeria Ibraeva, March 2007

Special Features in UiU
Extensive presentations with photo tours in the Special of Universes in Universe about the 54th Venice Biennale.
- Egypt

- The Future of a Promise