Change in Yemen, Change in the Arts?

Change in Yemen, Change in the Arts? Answers through an installation of Amna al Nassiri. 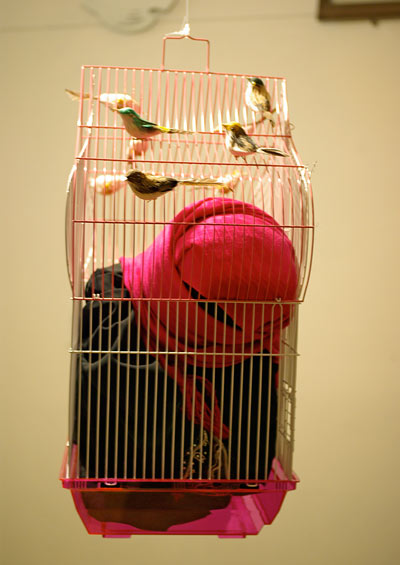 In Sana’a in February 2011, people started occupying the public space in what first appeared to be an opposition-led request for reform that later on changed into a broader and popular call for political change. By March, a bigger movement of youth and people from all classes and sectors of society was demanding different types of change, including the departure of president Ali Abd Allah Saleh and the overthrow of the system. Something new was happening: people were breaking through their fears of repression, real and imagined limits to freedom, and taboos long maintained about the figure of the president who has been almost untouchable until now. Concrete but also invisible blockages are currently being broken.

A year ago, in February 2010, a visual artist confronted the public with the very idea of blockages created by the limitation of freedom. At that time, Amna al Nassiri was the object of numerous remarks, questions and critiques following her installation Hisarat, which was the first of its kind to take place in Yemen [1]. Al Nassiri, who is a well-known painter educated in the former Soviet Union, an art critic who currently writes in and outside Yemen, and a professor at the Philosophy department at Sana’a University, explored through her work the idea of being blocked and under a sort of siege, which was not a comfortable critique to make at that time.

The work that she exhibited, which in English means "encirclements / blockages / siege," focused on blockages and limits imposed by society on men and women, in and outside Yemen, and also that we ourselves impose in a more or less conscious way on ourselves. From the artist’s point of view, the idea guiding the installation was to question "the constraints that weigh on our freedom and the conscious and unconscious oppression that is also created by fanaticism, which is a type of fear as well". The majority of the images the artist presented suggested women’s faces while insisting on the fact that she wanted to speak about human beings in general, because "what restrains and limits our freedom affects women and men in equal parts ". Twenty-two photographs were shown of silhouettes and bodies covered by fabrics, without a face and sometimes with nails or barbed wire instead. Next to the photographs was projected a piece of video art in which a body tried to get out of or to get rid of a black fabric that covered it. The feeling of oppression was underscored by a strident and repetitive music. In a room inside the building that hosted the installation, al Nassiri exhibited several soft sculptures: shelves filled with dolls sitting in rows one after the other, which the artist conceived as representing women’s place in society as "decorative objects"; birdcages filled with women while birds were put outside them, expressing the idea that living beings are meant to be free and that to see women inside cages is as contradictory as to see birds in cages. In the same room, a dummy wearing a man’s clothing had hands coming out of its neck and barbed wire instead of feet. Between these pieces there were hands scattered around the floor and coming out from the walls as if they were trying to find an exit from what restrained them. Finally, there was a black tent where people could come in to find themselves accompanied by a person covered in black, moving in the darkness. This piece, which was also a performance, was intended to explore people’s sensations as they entered this space.

The reactions during the opening were diverse, especially in the interpretation of the art pieces, which in the majority of the cases, were perceived as a critique of "women’s issues" in Yemen. Some saw exaggeration in these representations; others saw themselves inside the tent or the birdcages. Even if nothing informed viewers about the sex of the person moving in the darkness of the tent, visitors actually interpreted that it was a woman. As the artist elucidates, "many women thought it was about them but I spoke about women and men, I spoke of war, hunger, of many things, economic changes, globalization… I could have spoken of any of these things. I felt that people worried with this exhibition and I think art is not made only to feel good; people at the exhibition were angry because it bothered them. Women who have this type of life, where they feel in a sort of siege, felt uncomfortable with the exhibition because no one likes when people come to point out to you the things that are not right in your life. It is like when a psychologist tells you the things that are wrong in your life and you refuse to see it. In contrast, girls and women who are free and feel free liked the exhibition because it didn’t touch a major problem in their lives. I even saw some girls crying and some girls leaving in anger: it reminded them of their own problems. Reminding people of existing problems and confronting society with its real problems is part of doing art. I didn’t focus specifically on women, I spoke about everyone with this work." As a result, "shocking" was one of the words most often used to describe the experience lived throughout the installation. "Fear" and "anxiety" were also among the feelings most invoked by the visitors.

Through numerous articles appeared in the weeks following the opening, the Yemeni press reflected aspects of the impact that this installation had. This impact was even more visible among the artistic circles in Sana’a, in which the use of video, photography and performance by an artist well known as a painter triggered debate. As an artist based in Sana’a elucidated, "In a way, she is teaching people a new way to do art because the installation or the performance is a new genre in Yemen. At the same time, visual arts in Yemen are not yet fully established and to do an installation now is like skipping stages, it is a big step that is also confusing." Al Nassiri, who followed the press and heard artists’ comments in the weekly gathering she holds at her studio "Kawn", read in these reactions a rejection of change: "They feel the danger of this change, they don’t want changes in art in the same manner that they don’t want changes in their lives, in their societies."

Although recent events in the streets now show a different approach to change, it might not be the case in terms of art. What some artists described as "confusing" or "too raw" about this installation also reflects a moment of transition and another of continuity: transition from modern to contemporary media – like video art, installations or performances – and subjects – like critiques that aim at being more universal and that try to escape mainstream political uses of women’s bodies. Continuity in the sense that the reticence to change and the feeling of skipping stages is symptomatic of the weight modern art has in Yemen. Along with it also comes a predominance of painting among all disciplines, realism and impressionism amid the styles, and Western-influenced Orientalist aesthetics in terms of the subjects represented.

Perhaps today the reactions to the subject of this installation would have been different. In the eyes of the artist, a year ago she was speaking of something that today can be seen in the streets: the need and the willingness for change. What seems not so sure is the opening of the Yemeni artistic movement towards contemporary art, an opening that, just as was also necessary in the streets, might need a moment of rupture. When read in the context of the current changes taking place in the Yemeni artistic scene, Hisarat certainly appears as one of these breaking points.

A year ago, a visual artist confronted the public in Yemen with the very idea of blockages created by the limitation of freedom. At that time, Amna al Nassiri was the object of numerous remarks, questions and critiques following her installation Hisarat, which was the first of its kind to take place in Yemen.