Eight Yemeni photographers exhibit at the National Museum in Sana'a and other venues in Yemen. 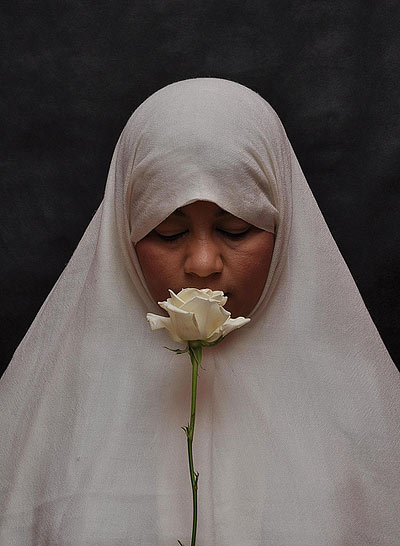 The Egyptian photographer Nabil Boutros, who lives in Paris, has a large experience in doing workshops in Arab and African countries. In Sanaa he focused not so much on technique but on finding what each of his students wanted to do and what they wanted to reach with their work. He approached this workshop with an insistence on "getting them to put words to their ideas, to make them get closer to what they wanted to do and not to what they were supposed to do". From Boutros’ point of view, "in the Arab world we don’t dare to say 'I', to speak in the first person, especially men. It was definitely not the case with Yemeni female photographers." For this reason he worked with his students on one or several personal projects, focusing not so much on the subject but on its formulation. As a result of this work, a great variety of questions and interests were formulated through the exhibition such as fatherhood and issues related to women’s body and role in society. In other cases it offered the public an intimate approach to Yemeni everyday life, to the poetry of bread making and to children’s games in a neighborhood of Sana’a.

The exhibition that showed the results of this workshop was the first such experience for some of the participants whereas others had previously exhibited their work at the CCF or they had participated in 2009 in another similar workshop conducted by Alfons Alt, who focused more on teaching a specific technique of photography mixed with painting. Except for one photographer who is actually one of the female pioneers in this line of work, the rest are part of the "young generation" that started working in photography in the 2000s. They all live and work in Sana’a, capital of the country.

The variety of works, preoccupations and aesthetics reflected in the exhibition Words of eyes is exhibited in Sana’a from 19 October until 1 November, at the National Museum, in Al-Tahreer square. The works of the eight artists will be touring other cities of the country, namely Taez from 8 - 20 November, and Aden from 7 - 20 December 2010.