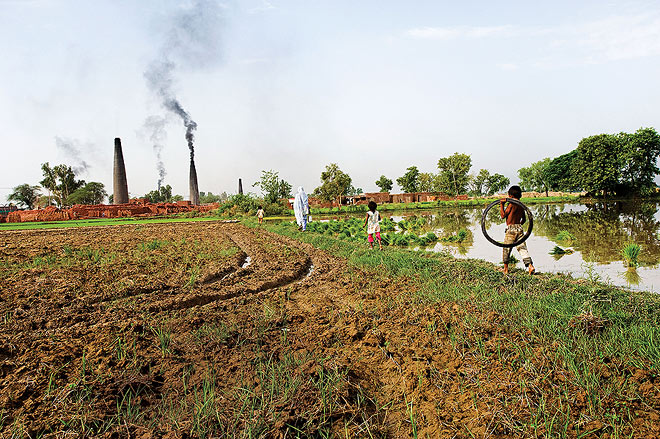 Spanning 150 years of photography from India, Pakistan, and Bangladesh, this ambitious survey of historic and contemporary works includes over 400 images by 82 artists. Using 'shared culture' as a parameter, it is the first comprehensive vision of South Asia to be presented in the West; these images are not 'about' the region and there are no European perspectives to be seen. Indeed, those looking for a text driven, ethnographic narrative of an ex-colonial world will sadly be missing the point.

Installed in a bastion of Western art – London's Whitechapel Gallery – 63 years after Indian Independence and the subsequent dissolution of the British Raj, this show aspires to explore its topography with decidedly indigenous eyes. Of course, politics is inherent in picture making – our 'ways of seeing' and the context in which we see them pose fundamental issues. Refreshingly, this is a case of self-discovery, a kind of meditative picturing of a collective self and its geographical truths, where the 'other' is observing from within.

Images like Mohammad Ali Salim's Worker's at a city construction site… (Bangladesh, 1980) and Mohammad Arif Ali's Rainy Days Image of Lahore (Pakistan, 2008) are not invested in archetypal victims or street urchins. While they do not ignore the pain or the facts, they offer a purposeful and frequently hopeful alternative to the media driven images of death and destruction, which have arguably desensitised audiences on the 'outside'. The curators have set out to question and even defy our received notions of the Subcontinent, presenting a sort of counter-colonial response to the official Western history of photography. They are asking us to celebrate South Asia's contribution, beginning in India in 1850, and in this sense the show becomes a pioneering catalyst, inspired by the gaps.

The curatorial line wants to trace the finer social and creative turning points inherent in each body of work. Sunil Gupta references a particular instance in how transsexuals are depicted in the context of the historic "fluidity of sexuality in India", previously outlawed under colonial law. While homogenisation is an obvious danger, he is quick to remind us that "culture cannot be partitioned", and the power of photography to engage contemporary audiences is such that 'Westerners' are likely to notice the similarities between these nations, while 'South Asians' are necessarily sensitive to their differences. But the landscape is shifting, as 'majority world' issues are increasingly addressed by those who understand them most and can no longer be ignored. More representations of the internal structures of hitherto 'foreign' realities will eventually balance out those one-dimensional visions of systems, symptoms, and conflicts. If there is a trend in the emergence of 'indigenous photographers' it is that they are able to achieve an intimacy with their subjects which enhances their humanity. For me it is this authenticity of image making that carries the editorial eloquence of its subject matter.

Paradoxically, despite its thriving art market, photography as a discipline is still emerging in India. And in Pakistan interest in this medium by a new generation of artists is a promising but recent phenomenon. Bangladesh has led the way with an established international festival - Chobi Mela - and Dhaka's dynamic Drik gallery (Sanskrit for vision) which has represented local professionals for more than 20 years.

This show is arranged in five thematic sections, which inevitably blend into and across national stories: the portrait, the performance, the family, the street, and the body politic. Legendary photographers from Bangladesh, such as Amanul Huq and Nasir Ali Mamun are presented alongside their present-day counterparts, such as Abir Abdullah, Shumon Ahmed, and Shahidul Alam. There are works from the early 19th century from the renowned Alkazi Collection in Delhi, the Abhishek Poddar Collection in Bangalore, and the White Star Archive in Karachi, and many previously unseen works from family archives, galleries, and established contemporary artists. We see hand-painted images of courtesans and families by anonymous photographers in the very first Indian-run studios, journalistic depictions of key political events (Rashid Talukder's Sheikh Mujibur Rahman returns to his homeland… in 1972 and Benazir Bhutto's arrival at Karachi airport in 1988), and cutting edge reconfigurations of the built up environment (Farida Batool's "Nai Reesan Shehr Lahore Diyan" 2006, and Rashid Rana's Twins 2007). As virtual co-protagonists in the unfolding of these stories, viewers are left to provide their own social critiques.

Fantastic circus acts (Saibal Das's Matinee Show 2001) and glamorous Bollywood stars (Dev Anand and Meena Kumari in the 1950s) capture portraits within portraits, reinforcing photography's ability to empower the object of its gaze. Here is a region reconstructing its own image, touching on castes and sexuality as naturally as geopolitics and environmental disasters. It is not the 'otherness' we need to consider, but rather our willingness to become re-acquainted with what we have presumed to know.

Echoing the literary musing of one of the curators, Radhika Singh, who titled the show on a line from T.S Eliot's Ash Wednesday (1930) - "This is the time of tension between dying and birth; The place of solitude where three dreams cross…" - I can't help recalling William Blake's Letter to Revd Dr Trusler (1799) - "As a man is, so he sees. As the eye is formed, such are its powers". Packaging imagery and argument is always problematic, but this show's self-assured and celebratory tones manage to amaze both aesthetically and intellectually. As if the collective lens were refocused on the circulation of discourse and the forging of transnational connections between people across time. It's a pity this exhibition is not, at least at this stage, travelling to places like Birmingham or Leicester, where the fields of vision from within contemporary Britain would no doubt offer even richer educational perspectives.

Independent writer and curator, with a focus on Asian contemporary art. She is the Asia-Pacific Publications and Projects Consultant for Skira International Publishing in Milan.