Opening up the Archives

About the symposium in Cairo on archives and other strategies of (re)activation of cultural memory. 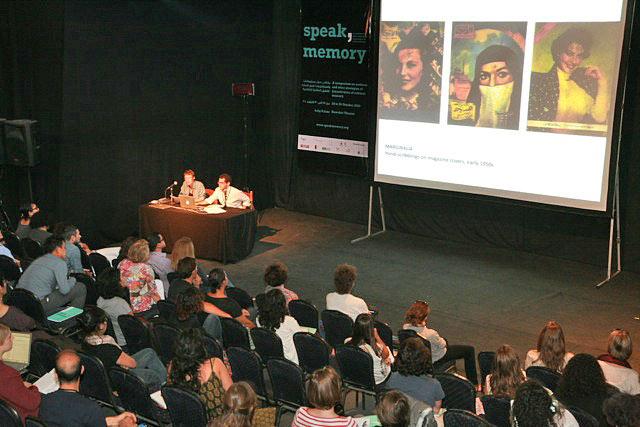 There has been much talk of a "cultural renaissance" in the Middle East over the past ten years. The establishment and consolidation of biennials, art fairs and the plethora of new museums sprouting up in the Gulf has put the region in the art world’s spotlight. However, talk of renaissance often implies that the region is coming out of a dark age where either history stood still or memory of that period was lost.

Speak, Memory: On archives and other strategies of (re) activation of cultural memory, which took place at the Townhouse Gallery in Cairo in October 2010 set out to explore ways of recovering the vanishing history of the region’s neglected twentieth century cultural and artistic movements. The event brought together artists, curators, historians, archivists, collectors and museum professionals to engage in a critical discussion on the state of archives and existing scholarship on the Middle East’s recent art history. Symposium participants were invited to reflect on possible strategies to preserve and reactivate the region’s recent cultural memory.

There seems to be a general consensus that existing scholarship covering the region’s modern art history is scarce and unsatisfactory. Primary sources do exist but they are scattered and difficult to access, either because they are in the hands of private collectors or because they are in State-held repositories that have inconsistent and opaque access policies.

However, more recently we have started to witness a proliferation of historiographic and research projects that are seeking to question, document or shed light on the region’s 20th century cultural history, each of them adopting their own particular strategy or methodology. Examples include, among others, Walid Raad’s project Scratching on Things I Could Disavow: a history of modern and contemporary art in the Arab World or research endeavors such as the Study Group on the History of Arab Modernities in the Visual Arts initiated by Beirut-based researchers Rasha Salti and Kristine Khouri, an initiative that is questioning existing scholarship on modern Arab art and seeking to create a living archive documenting the history of exhibitions, galleries, collectors and artistic practices that have seemingly been forgotten, misinterpreted or sometimes simply dismissed. Finally a new generation of academics and researchers (many of whom are pursuing their PhD in Universities in the U.S. and are affiliated to AMCA [1] – the Association of Modern and Contemporary Art of the Arab World, Iran and Turkey) are producing valuable new research in the field.

Just as these research projects are gaining momentum, the region’s modern and contemporary art market is attracting increasing attention from private collectors and museums. This is leading to the gradual acquisition and export of artists’ archives, magazines and other remnants of the region’s twentieth century cultural history [2]. This sale and purchase of documents by collectors commonly takes place under the radar, therefore making it impossible to track where this valuable research material is going [3]. And even when the buyer is a foreign museum or university that intends to make the material accessible, the export of archives (whether they are artists’ archives or family archives) remains highly problematic, in so far as it perpetuates the existing disconnect between the place where art history is formulated and the site of artistic production.

During the three days of the Speak, Memory symposium, invited speakers and participants touched upon the problematics of the archive as a seemingly objective repository of facts and their instrumentalisation by political forces interested in ensuring the prevalence of specific historical narratives. In an environment where individuals have limited trust in government authorities and where national archives are not easily accessible, independent archival projects such as the Arab Image Foundation [4], the Asia Art Archive [5], the Indonesian Visual Art Archive [6] or the digital media archive PAD.MA [7] - to name but a few of the initiatives that were presented at the symposium - provide inspiring models of ways to put forth more diverse voices and discourses. Nonetheless, as eloquently reported by Cairo-based writer Mai El Wakil in a blog about the symposium [8], by producing an overwhelming monument of knowledge, independent archival projects can end up creating "equally hegemonic structures parallel to the ones that many researchers are trying to escape". Moreover, as evidenced by collaborations such as the existing partnership between the Southern Conceptualisms Network [9] in Latin-America and the Reina Sofía Museum in Spain, there are ways for institutions and independent research initiatives to join forces to preserve archival collections and foster independent research, in a set-up where the institution or museum can provide much needed funding for research, meetings or publications, or the infrastructure for the preservation or digitization of collections, whilst affording researchers the freedom to create their own narratives.

So where does the solution lie? In a document entitled "10 thesis on the Archive", the initiators of PAD.MA urged us not to wait for the archive ("don’t wait for the archive"), an imperative that was also the title of a workshop they led in Cairo prior to the symposium. Their third thesis (which reads: "the Direction of Archiving will be Outward, not Inward") puts forward an alternative philosophy of the archive. It proposes a "process that operates based on diffusion, not consolidation, through imagination, not memory, and towards creation, not conservation" [10]. Perhaps in this vein, the best way for independent archival initiatives to avoid replicating hegemonic models of knowledge production is to open up their archives and collections to artists, researchers, curators or anyone interesting in accessing, processing and re-appropriating the material in their own way. Ideally, opening up the archive shouldn’t just mean having regular opening hours and a website, it should entail an active search for users, an open invitation for individuals to consume the material. Concrete examples could include a residency program for curators or researchers or inviting an artist collective to react to a collection.

Artistic archival practices can be particularly enlightening in terms of their production of counter identities, counter narratives and counter memories. This was brought to life by symposium presentations such as Celine Condorelli’s poetic evocation of the history of cotton production and exile in Alexandria, Susan Meiselas’ archival project on the visual history of the Kurds or Adam Broomberg and Oliver Chanarin’s book project on the photographic archive of Belfast Exposed in Northern Ireland.

In the end, Speak, Memory undoubtedly opened up more questions than it resolved, but it set the scene for a more sustained conversation on archival projects, historiographic endeavors and research initiatives in the Middle East. The symposium highlighted many relevant topics that could be the basis for specialized meetings on methodological or practical topics (such as copyright issues, the conservation or preservation of archives at risk, the technology of archiving, research methodologies or advocacy strategies to encourage access to national archives) or thematic subjects (such as recording and archiving oral histories, the documentation of performance art or the challenges of documenting contemporary art).

Symposium proceedings and video footage will be posted on the website www.speakmemory.org. Immediate steps following the symposium will include a publication and an archive map that will identify and describe archives and research projects that may be of interest to individuals doing research in the region's cultural history. If you are aware of relevant archives (state-affiliated or independent) or research initiatives, please send an email to Laura Carderera at laura(at)speakmemory.org.

Curator and arts manager, working between Istanbul and Cairo.

Speak, Memory:
On archives and other strategies of (re) activation of cultural memory