Sentences on the banks and other activities 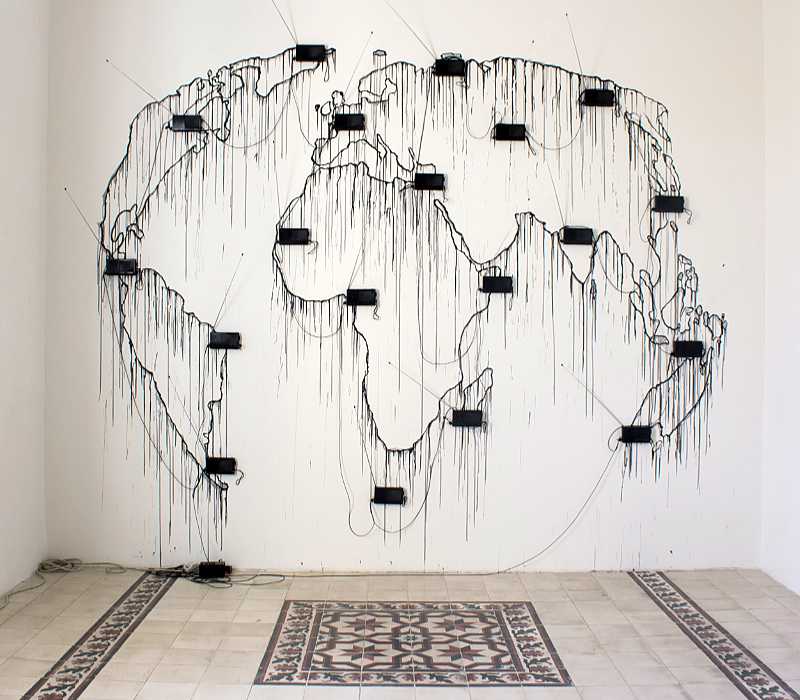 The exhibition project Sentences on the Banks and other Activities is conceived as an arena for research activities, a project experimenting with display formats and ideal narratives of artworks and their histories. The main room acts as a headquarters, connecting the roads and passages built between the artists’ studios and the surrounding urban mountains [1].

Today the exhibition space is for the curator what the studio is for the artist: a nomadic mental space, more an imprecise field for ideas than a factory for objects. The main role of an exhibition is to share artistic production and to contribute to the conviviality in the city. An exhibition is a space of freedom where a diversity of artworks coexists like words in a poem. This exhibition acts as a hub for collaborative operations, provoking statements or dialogue with other fields and disciplines. The action of production and the space of visibility are intertwined.

Among the ideas behind the exhibition in Amman is the importance of bridging different areas and mountains and connecting the art scene to other arenas. The artworks in the exhibition appear at the same time as the activities initiated in different parts of the city by its activists and citizens. Artworks do for the city what the word does for the novel, what the flower does for the forest, or what the stone rose does for the desert; it creates an exceptional moment for thinking or contemplating. In a time where cultural production is instrumentalised by touristic projects and financial gains, the challenge is to retain the soul of the artworks by underscoring the strength of their meaning while ensuring that they are connected to the urban environment and produced to be shared in a context where culture is not the priority.

Amman is a city of passage, with a significant number of exiles arriving from surrounding countries plagued by war or endemic conflicts. A constellation of relevant notions is contained in the artworks such as fear, desire, belief, displacement, and social ecology.

The project deals with establishing links between "bordures" (not borders) as well as looking at fixed passages and limits between spaces, disciplines, and conventions. It is important that cultural production makes sense of the here/now. Creating an exhibition means building a space that gives sense to the multiple expressions contained within artworks and this project hopes to create freedom in a place where people are confined at different levels (religion, politics, land divisions...).

The format of the exhibition is fused with the idea of ‘publishing,’ as Amman has known public reading since antiquity, from The Suspended Odes (al-muallaqat) , which date to before the time of Ishmael, to Mahmoud Darwish and the songs repeated in coffee shops and on the terraces of mosques. The first publication, Volume 1, acts as a space for listening; it is an invitation to address specific issues. Art can be used as a tool for changing society or act as a current against it. Volume 1 is an instrument of correspondence between the artist and curators as actors and the audience as associates in the formulation of ideas that construct the exhibition space as a place for dialogue.

Cultural production, art spaces, theatres, and universities are an important part of society but can only be active when their production is shared within a larger context. The breath of cultural bodies can provoke "practive" dialogues when they connect to other spheres [2].. Any individual or collective activity can have an exponential effect on the rest of society. No renaissance can be valid if the dream is not continuously charged.

When an expression, be it an art project, a film, a book, a performance, or even an exhibition, creates a passage between the proposition of the creator and the user, the context is activated. In architecture, foundations and walls are not eternal and precarious structures can be more solid than bunkers.

How can we make an exhibition project the centre of the world when we only believe in a fragmented universe? This project integrates production across disciplines and social practices, associating the exhibition space with public and private spheres, and cultural sites around the city. It deals with the city as a shared space. The politics of the use of public space interacts with ways of living in private places. The project is launched with an invitation for people to join a collective space for thinking, where they are encouraged to express ideas of realities and imagination. It is not about making sentences but rather about making sense.

The curatorial enunciation suggests the simultaneous appearance, in time and space, of art production, post-production and encounters; it experiments with the idea of the emergence of artistic expression as part of the formulation process. The urgent nature of this idea of sharing while creating interrogates the speed of this day and age, and the unaccounted distance between real facts and history, documentary and fiction.

Sentences on the banks and other activities is a project that speaks to the "here and now," proposing an open perspective and imagining a possible correspondence between the inside and outside of the art fields.

Independent curator and art critic. Founder/director of L'appartement 22 in Rabat, Morocco. Lives there and in Paris, France.

Sentences on the banks and other activities