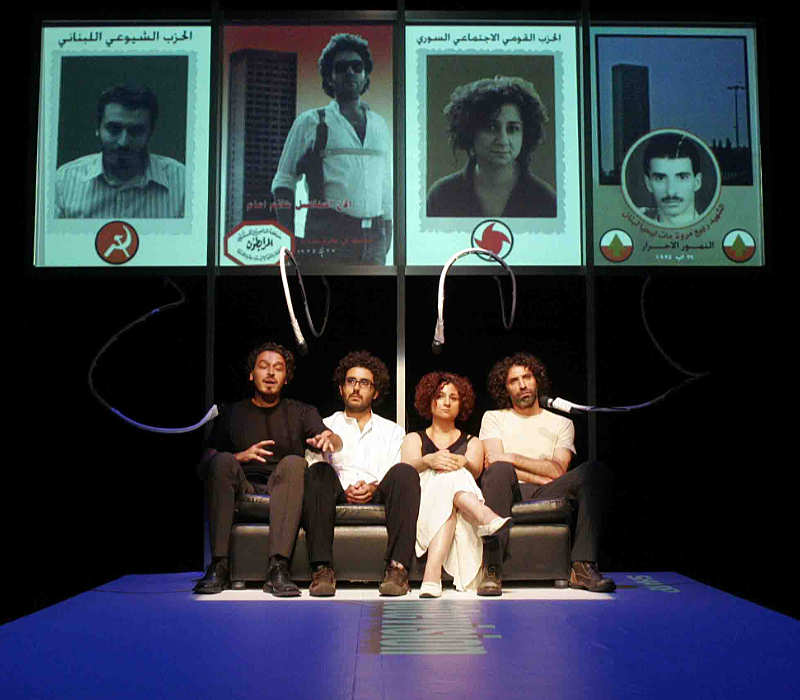 In the 90-minute performance Photo-Romance (2009), Rabih Mroué and his partner Lina Saneh meet on stage to discuss the script of a film adaptation that is slowly pieced together on an enormous screen beside them. In The Inhabitants of Images (also 2009), Mroué delivers an hour-long lecture on the possible meanings and implications of political posters he has seen on the streets of Beirut. In How Nancy Wished that Everything Was an April Fool’s Joke (2007), written with Fadi Toufic, Mroué, Saneh, Ziad Antar and Hatem Imam piece together an episodic history of Lebanon’s civil war by playing a garrulous game in which each actor narrates his or her character’s involvement in the conflict. In Make Me Stop Smoking (2006), Mroué shares the ephemeral materials he has gathered into a curious personal archive as a means, he says, of ridding himself of their weight and consequence. In Who’s Afraid of Representation (2004), Mroué and Saneh oscillate on stage between examples of radical performance art and the story of a Lebanese civil servant who went to work one day and gunned down his colleagues. In Looking for a Missing Employee (2003), Mroué plays the part of an amateur detective investigating the case of a man who disappeared from his low-level post at the Ministry of Finance, never to be seen again.

The narrative devices that Mroué employs – the premises on which his performances are built – almost always concern forms of inquiry that are open and underway in the time and space of his works. His pieces almost always feel like works in progress. This is a clever bit of artistry, of course, as Mroué’s performances are meticulously scripted and carefully staged and they do not rely on or resort to improvised action or dialogue. But as structures or skeletons for his works, these forms of inquiry have the effect of engaging viewers not with spectacle but with the development of thought. His performances crack open the creative process and with it the urgency of the issues that lie at the core of Mroué’s concern, namely the meaning of the body on stage as a metaphor for the agency of an individual in society, culture, a political system and a state.

Mroué belongs to a generation of artists who came of age in Beirut during the civil war that lurched fitfully in Lebanon from 1975 through 1990. Born in 1967, he studied theater at the Lebanese University. Saneh, born in 1966, was his classmate, and they collaborated for the first time in 1991, on a stage adaptation of Elias Khoury’s novel The Journey of Little Gandhi (1989), about a shoe-shine boy, shot dead in the streets of Beirut, whose story is narrated by an aging prostitute named Alice. Since then, Mroué and Saneh, have worked together both formally and informally on an ever-expanding series of works that are deeply committed to theater but, at the same time, flirt with other forms, concepts, disciplines, media and ideas.

It is often assumed that cultural life in Lebanon ground to a halt during the civil war, and that the artists of Mroué and Saneh’s generation – such as Walid Raad, Akram Zaatari, Marwan Rechmaoui and Walid Sadek, all of whom share aspects of a certain sensibility – were responsible for constructing a contemporary art scene from scratch in the 1990s. But this is little more than a convenient fiction. Commercial art dealers, old-school critics and persevering gallery owners will over tell you that the art market was never as good as it was in the 1970s and 1980s, when internal displacement, the destruction of buildings, and the acquisition of war-time wealth, resulted in brisk sales, as local buyers were constantly moving and refurbishing their homes.

Theater also thrived in those decades, and the plays of Ziad Rahbani in particular circulated widely on battered cassette tapes that were played and traded by taxi drivers, among others. The innovations of the time were primarily on the level of language, and Rahbani’s work was notable for replacing the mountain vernacular that had characterized Lebanese theater for decades with an urban Beiruti accent that could not be reduced to an indication of any one sect or socioeconomic class.

When the civil war came to an end, theater, perceived by many as a robust living tradition, was one of the arts sectors that enjoyed a flood of local funding and support. But Mroué and Saneh quickly stepped out of the mainstream, and started to question how much theater could do, and how far it could go. The venues that gave them space for experimentation included the Russian Cultural Center, makeshift halls and the houses of friends and colleagues. In 1997, two independent productions – Mroué’s Extension 19 and Saneh’s Ovrira – reflected their desire to move beyond European models and influences in relation to the avant-garde. Ever since the production of Come In Sir, We Are Waiting for You Outside (1998), written by Mroué in collaboration with the artist and architect Tony Chakar, screens and projected images have featured prominently in their work. And ever since the production of Mroué’s video Face A/Face B (2001), both artists have been making works that blur and confound the boundaries between theater and the visual arts.

In the same week that Mroué debuted The Inhabitants of Images, in the Bidoun Lounge at Art Dubai in 2009, he also performed a piece that was part of the Sharjah Biennial’s performance program, curated by Tarek Abou El Fetouh. That piece, titled Theater with Dirty Feet, is an artist’s talk masquerading as a performance, or vice versa. It belongs the same strain of Mroué’s work that includes Looking for a Missing Employee and The Inhabitants, which is a strain apart from the more technically complex and multifaceted performances of Biokraphia (2002), Who’s Afraid, Nancy and Photo-Romance. Theater with Dirty Feet is by far Mroué’s most pared down piece. But it also offers the most articulate explanation of his practice, which is, in effect, to be a troublemaker and intruder in whatever field or circumstance he happens to find himself in. By opening up his process, he also implicates us, as viewers, in his mischief, which is a subtle, wonderful way of prodding an audience to act, to question, to challenge and to think.