Between Tradition and a Vision of the Future

A photo exhibition in Doha on the social importance of traditional architecture in the Gulf states. 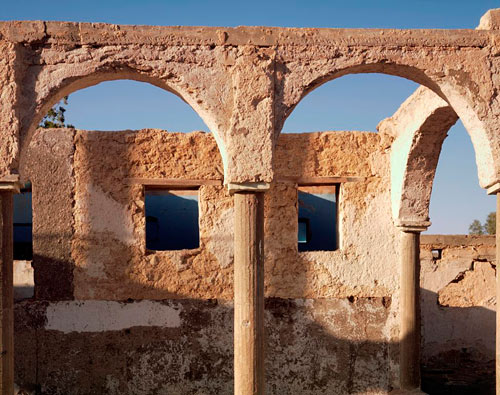 What role does architecture play as a symbolization of a society's cultural heritage? This question is especially burning in today's context of the region's economic and construction boom and accompanying structural transformation.

In the framework of the major art and culture festival Doha – Capital of Arab Culture 2010, the photo exhibition My Father's House – The Architecture of Cultural Heritage (Feb. 23- March 16, 2010) has arrived at its last venue so far: the capital of Qatar, where it is being presented in the gallery rooms in the Souq Waqif. In 2009, it was already on view in Oman, Bahrain, Saudi Arabia, and the United Arab Emirates. The showing, organized and initiated by the British Council, consists of photographic works and a film by five Arab and three British artists.

A more fitting site for the exhibition's theme cannot be found than the Souq Waqif in Doha. The expensively restored historical market complex in the heart of the old city center lies close to the gleaming skyline of West Bay, a promontory artificially heaped up in the sea, on which a still-growing forest of skyscrapers has risen in recent years. But not only the historical and the new economic center stand in stark contrast to each other. Within the Souq, traditional shopping arcades and wares typical of the country compete with modern cafés and souvenir shops catering to the desires of tourists.

The exhibition's works address this problematic of the encounter between old and new, tradition and progress, recollection and a vision of the future. Beyond that, the writing, film, and photography workshops of the framework program offer a forum to discuss whether the reconstruction of architectonic tradition serves to preserve local identity or functions as a tourist attraction. In the course of Qatar's breakneck development, one currently senses the countervailing trend to recall the country's Arab roots. At the same time, the tourism industry and the economic site Doha are being expanded.

How should people deal with their cultural background in the face of the challenges accompanying globalization and capitalism on the Western model? What significance does the preservation of old Arab architectural art have for the rapidly changing face of the Gulf states, where ultramodern buildings increasingly dominate the cityscape?

With his selection of artistic positions, the curator, Sean Williams, has succeeded in opening up a broad spectrum related to the theme. The works created in recent years in Bahrain, Yemen, Qatar, Oman, Saudi Arabia, and the United Arab Emirates reflect on the past, present, and future of built culture in the region and provide subjective impressions of decay, reconstruction, and the construction boom, moving between documentation and nostalgia.

Thus, Tim Hetherington's photographic inventories of typical Arabic architecture and the Yemeni photographer Boushra Almutawakel's glimpses into private homes stand beside and complement each other. In a cool, formal aesthetic manner reminiscent of Bernd and Hilla Becher, Hetherington documents the visual attractiveness of water tanks or the canopies over filling stations. In turn, Almutawakel's atmospheric pictures of interior spaces in residential buildings – ranging from the mud dwellings of the poorest to the modern villas of the nouveau riche in Sana'a – speak of the residents' everyday life. The viewer is provided access to intimate areas normally closed off to outsiders.

The works by filmmaker Hafiz Ali of Qatar and by the Saudi Arabian photographer Wed Abdul-Jawad cast a nostalgic gaze on earlier sites of community and social exchange. Photos of the traditional center of the Saudi Arabian city Jeddah are staged as historical postcards and underlain with voices of the inhabitants speaking of old times. This installation by Adbul-Jawad aims to make it clear that the old city and the traditional art of narration and oral tradition are threatened with oblivion. In his poetic documentation Scent of Shadows, Hafiz Ali recalls the original meaning of cinema in his homeland as a social institution and area of communal experience that is disappearing with the rise of large multiplex movie houses.

The two photographic projects by Camille Zakharia, a Lebanese photo artist and engineer living in Bahrain, frame the theme of the exhibition. On the one hand, the series Al-Bilad shows how the inhabitants of the Sultanate of Oman identify with the traditional irrigation system that crosses the rural areas and still supplies them with water today. On the other hand, the photo collages titled Distorted Memories reveal the effects of Bahrain's depleted water resources, a result of minimally regulated construction.

Becoming and passing away – in the 21st century, the Gulf states reinvent themselves in cycles. In thirty years, will we view the architectural achievements that are highly modern today the way Lamya Gargash's photographs see the buildings in Dubai that have been abandoned to decay and demolition to make way for new constructions?