Murmurer or the Whispering of Neglected Walls. The photographic work of the Tunisian artist. 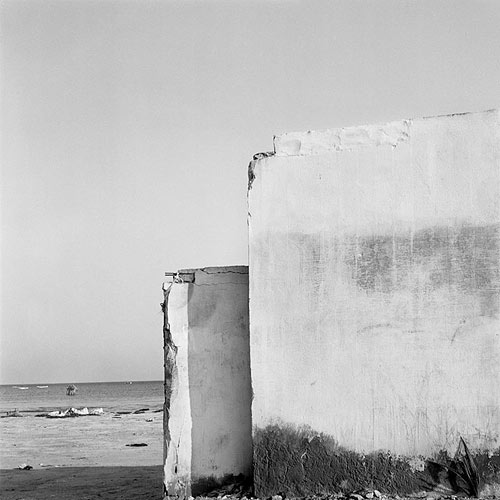 Mouna Karray photographs 'walls' – abandoned architectural barriers, to be more precise – that increasingly characterize the cityscape of Sfax. Sfax is the biggest industrial town and seaport of Tunisia and it was also the birthplace of the artist, in 1970.

"It was the absurdity, the pointlessness of these architectural sites that caught my attention; the lack of knowledge of what is going to happen to them. Will they remain or will they soon be demolished? From the beginning I was fascinated by the stories the walls seem to whisper to me. Some of them have been subject to alterations over time. Doors and windows were added; or removed by being provisionally filled with debris. The traces of time mark them like scars. It is their status as faulty that suits me," reveals Mouna Karray in an interview. [1]

The photographer, who studied at the Institut Supérieur d'Animation Culturelle in Tunis and obtained her Masters degree in Image and Media at the Tokyo Institute of Polytechnics and Arts, currently commutes between Paris and Tunisia. Receiving samples of her photographic work composed in Japan, her mother wondered why she only got to see images of her daughter rather than the much-awaited sights of the faraway foreign land. "Sometimes you have to leave your home and to move far away, to understand what is close", Mouna Karray tries to explain the phase when she exclusively made self-portraits. She was interested in the question of identity in a society that differs so distinctly from her own.

Back in Tunisia she drew attention with the installation El mech'hed, produced as a memorial to her father, mourning his 'missed' death two years earlier. Instead of images of herself, sites or places radiating a yawning void have now become the new subject. A staged tomb with a gravestone is inlaid with passages from the letters the artist sent to her father during her stay in Japan. These are shown together with a series of photos of her parents' bedroom. The sole motif is the empty half of the marriage bed that her father had occupied for decades. In some sequences her mother appears fully dressed, forlornly posing on the half-orphaned bed.

Viewing the photo series Murmurer [2] also evokes melancholic feelings similar to those caused by the grave and the photos of the empty marriage bed. The morbid walls bear witness to a more glorious past, of a time when they had a responsible function in a larger 'enterprise'. While El mech'hed is a very personal, intimate story, the tales whispered in Murmurer are composed much more abstractly and with greater complexity of content.

Here too, the distance from home, the regular absences from the city of her birth, are probably what enable Mouna Karray to discover these neglected architectural sites as a suitable means of expression for her artistic interventions. Built primarily to protect or conceal, these barricades lose their credibility when decayed, dilapidated, or partially demolished and remain squalid scars on the surface of the city. Still, they attract attention in a certain way. There is something special ineluctably captivating about them, an enchanting spirit, a murmuring, and a promise of hidden adventures.

The mystery that lies behind these inhospitable walls triggers the desire to peek behind the partitions or even to scale them. Alas, overcoming these 'forests of briars' does not lead to a 'Sleeping Beauty' dreaming of her prince. On the contrary, the surprise is decidedly disagreeable: devastated land, debris and perhaps discarded construction machinery will be found, blatantly left behind by the former occupiers.

Mouna Karray's photographs are documents of reality. By portraying the urban neglect the artist raises questions about the reasons for its existence. Consequently, the images of the dilapidated walls may become a metaphor for the current state of affairs. The decayed condition arouses the hope for an imminent collapse of the walls, presaged by the heavy cracks in the masonry or the ripped up fences.

The pure aesthetics of Karray's black-and-white photography softens the harsh reality and the immediacy of the issue. Time seems to stand still in her pictures. The Minimalism, the strong, conceptual composition of horizontals and verticals, reflects Japanese influences. Choosing the square as the leading format – also a mechanical result of her medium format camera – refers to the Muslim concept of aesthetics in which the square is a basic element.

The French philosopher Roland Barthes once examined the "force of attraction" of photographs that "set him off". [3] If something similar is attempted here, to explore this "force of attraction", one could postulate that upon contemplation, the appeal of Karray's work does not exclusively rely solely on the complexity of its contents and on its sublime symbolism, but in particular on the poetic black-and-white interpretation of the theme, when for example the artist's systematic and personal way of composition causes a certain "animation". [4]