The Tunisian photographer and her quest to understand the passage of time and forms of change. 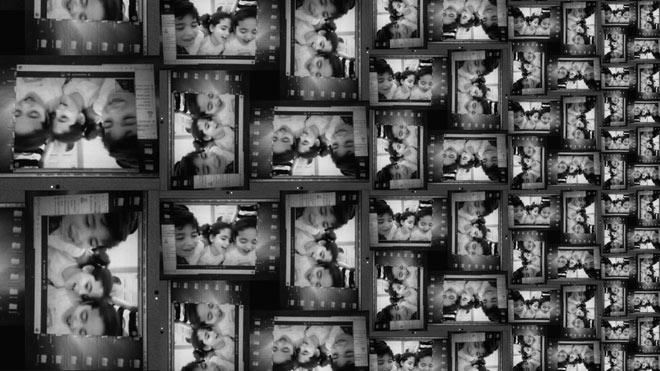 Life's Movement
In Mouna Jemal's artistic practice, her fundamental preoccupation is a quest to understand the passage of time and the ways in which beings and things change. In her numerous self-portraits, she tracks the trace of time on her face by intensifying imperceptible changes, sometimes intervening with color or using disguises. This is the case in her 2004 photo-mosaic work, Souvenirs d'un portrait en souvenirs (Memories of a Portrait in Memories). The repetitions and differences in this self-portrait eventually form into a kaleidoscope that arouses the viewer's gaze.
The transition to digital photography and Photoshop allowed Jemal to better reveal the small mutations that occur daily in physiognomy and on bodies. The artist seeks to capture how life moves in fragments, to capture the diversity of its events and metamorphoses. This is why she considers her art as inseparable from such moments. It is a conviction that intensified with the birth of her triplets. She found herself taken in by this universe in which her attention was almost entirely focused on the life and the development of her three children. At the same time, she experienced more ardently the desire to commit the processes of transformation to memory in order to make visible the ways in which time intervenes. "Beginning with this moment," she says, "the instantaneity of the photograph became more interesting to me in order to seize the image/event. This is what excites me: that the image is within reach, whatever the camera might be, from the most sophisticated to the cell phone." Through their different postures and appearances, her children, now her privileged models, provide an infinite source of images. Mouna Jemal manipulates these images, taken over hours and days, as if to exhaust their possibilities. Through this manipulation, she explores the image's constitutive elements.

The Work of the Image
Mouna Jemal's goal is to play with the incredible richness of the image in order to make it, as she says, "a kind of trompe l'oeil, illusion, mirage, offered to the spectators' eyes." Her works sometimes give the impression of being enigmatic arabesques or ancient carpets with abstract designs. The artist invites the viewer's gaze to delve into the image's mystery, to scrutinize it in order to discover at its core the elements that she orders through her manipulations. She splits, inverts, and crosses what are, these days, most often photographic images of her children. She takes these photographs when her three young triplets are playing and the images thus vary with the different postures of their bodies. Departing concentrically, in a spiral, or, more simply, in a checkerboard, these images reworked in Photoshop and sometimes lightly colored become the occasion for playing with presence and absence. These works allow one to see and to consider the enigma of the image. The artist likes to explode the image in order to make unsuspected forms appear there indefinitely. Such forms remind us of the complexity of the visible. She does this in her 2009 photo installations such as Jour (Day), Contre-jour (Backlighting) , and Intérieur-Extérieur (Interior-Exterior), exhibited at the 2nd Pan-African Cultural Festival in Algiers.
Time / Space
Both time and space have long been favorite subjects. She multiplies shots of her children in spaces that are at once closed and transparent, like windows. "The image of children in windows interests me. At first, it was our tradition. Beginning when my triplets were two years old, I put them in the window so that they would play for a moment in complete security in a space that is at the border of inside and outside." For the artist, these images of the space between inside and outside were the occasion to address problems of imprisonment and freedom. Her recent works Memories and Memories Illusion are photographs of her children taken in the window of an old fort in the Tunisian village, Ghar el Melh, that was once a prison for slaves in North Africa. Here, the artist explores how this fort parallels Senegal's Slaves House on Gorée Island, which she had an opportunity to visit several years ago. It is this same idea that led to the installation, Fate, for which Mouna Jemal received second prize at the 9th Dakar Biennale. She symmetrically multiplies fragmented photographs of her children taken inside the fort's windows. These images of bodies crowded together and arranged alternately right side up and upside down create a virtual boat that brings to mind the risks of servitude and of past and present migrations.
Space as the site of memory also appears in Escape by Skype, an image of her triplets captured on the computer screen with Skype. It reminds her of the first time she saw her children just after their birth and through the window of an incubator. This virtual image, provided by the computer screen and reworked into a fractal image, is like a window, recalling that the perception of others is not so easily understood. Today the artist wants to exploit the foundation of the image even more in what it reveals and hides by using 3D.

Biography, Exhibitions and Prizes
Born in Paris in 1973, Mouna Jemal is an artist and photographer. She lives and works in Tunis where she teaches art at the Institute of Fine Arts (Institut supérieur des Beaux-arts). She studied at the School of Fine Arts in Tunis (Ecole des Beaux Arts de Tunis) from which she received her bachelor of fine arts with a concentration in engraving. She then enrolled at the University of Paris 1 Panthéon-Sorbonne for her doctorate of arts and sciences with the thesis "Shadow traces time, with a photographic approach." She defended her thesis in 2002. In it, she develops her research on art photography as the writing of light and on the traces of time, particularly through the "shadow it bears." She is active in the Tunisian artistic scene and is a member of the Union of Tunisian Artists (Union des Artistes Plasticiens Tunisiens).
Mouna Jemal has exhibited her photographs and installation work since 1993. She has participated in numerous group exhibitions and four solo exhibitions in Tunisia as well as biennales and other artistic projects abroad. As someone living on the African continent, she considers two last projects as very important. In July 2009, she participated in the 2nd Pan-African Cultural Festival of Algiers and then in November 2009, in the 8th Bamako Biennale of Photography. In 2005, she was awarded the Grand Prize of the City of Tunis for photography with her work Halima ma Joconde (Halima My Mona Lisa). In 2010, she received the presidential merit prize in Letters and Arts (prize for photography) and the prize from Senegal's Minister of Culture at the 9th Biennale of Contemporary African Art Dak'Art.

Tunisian curator and writer. Professor of Aesthetics and Philosophy of Art at Tunis University.