Mella Jaarsma: In Between Shadows 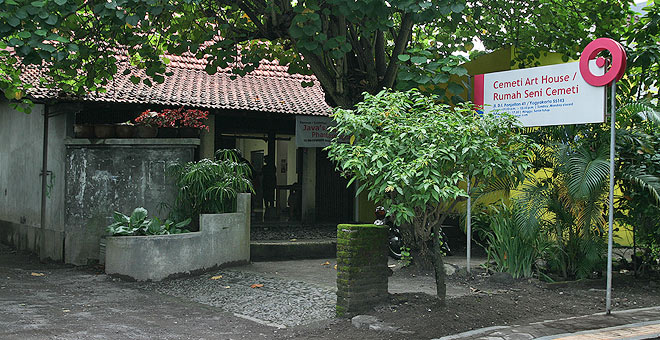 Dutch-born, Jogja-based artist Mella Jaarsma's latest work Square body-Empat Kanda could well be considered a return to her fascination with the play between light and shadow. Shadows have been her first fascination since she came to study art in Jakarta in the early 1980s, when she deliberately lived in a shabby boarding house to experience the shadows on the wall produced by candlelight when the electricity failed. Moving to Jogjakarta, she enjoyed the wayang performances and the flickering of the lampu templek, traditional wall lamps, along the sidewalk warungs where the shadows of visitors were reflected on the cloth partitions separating them. Shadows became a metaphor for the human body in all its various forms and positions vis-à-vis space, tradition, culture, religion and politics, but they also represented the border between the seen and the unseen, the tangible and the intangible.

It is this mystique that has led to Square Body-Empat Kanda, a beautiful work in which a male and two females move in the dimly lit space wearing plain white dresses. On and between them move shadows of the four kanda creatures or siblings that in Balinese belief accompany a person as guardian shadows throughout life. The work was first seen at the opening of the exhibition Beyond the Dutch, Indonesia, The Netherlands and the Visual Arts from 1900 onwards, 15 October 2009. In recognition of her role as a mediator bringing contemporary Indonesian artists to the Netherlands and, vice versa, Dutch contemporary artists to Indonesia, Mella was given a special place between the part that showed works in post-colonial Indonesia and those from the post-colonialist Netherlands.

Mella Jaarsma is widely known as the person who, with her husband Ninditiyo Adipurnomo, established first a small non-commercial gallery to accommodate alternative art that no other gallery would accept, then the Cemeti Art House and Art Foundation. They not only became trustworthy resources on Indonesian contemporary art, but also actively fostered art development in Jogja and beyond. In 2006 the couple was awarded the prestigious John D. Rockefeller 3rd Prize for Professional Achievement for their commitment to developing Indonesian artists. The New York-based Asian Cultural Council presents the award annually to individuals from Asia and the United States who have made a particularly significant contribution to art in Asia.

As an artist, Mella is equally known and committed. Her comments on prevailing social and political issues in Indonesian society are revealing and insightful. These are issues of discrimination, racialism, minorities and identity, which she finds she has an urge and responsibility to comment on in her art works.

In the late 1990s, as social, political, ethnic and religious tensions mounted in Indonesia and culminated in exceptional racial violence, the haunting meaning of identity became an even more pressing consideration in her art. Having had to endure public perceptions of her "otherness" as an individual, that is, one with a white skin and European features, even the everyday question "asal dari mana" (where do you come from?) made her feel awkward. Confronted with racism, her understanding of minorities became even more profound. Fighting and struggling are part of human nature, she says. They help us learn to search for balance. This is revealed in Bule Bull, a cloak made of sliced horns linked together and looking like armor. Why horns? Because horns are used for fighting as well as for protection.

The varied cultural interpretations of the frog became a medium for her to express concern over issues of cultural difference and racial diversity, now that a decline in tolerance for multi-ethnic and multi-religious societies is perceptible. Frogs, a delicacy in Chinese cuisine, a nickname for the Netherlands – which is also known as "kikkerland" or land of the frogs – and a prohibited food item for Muslims, became a metaphor for the human condition.

Skinless frogs began to fill her canvases, transposed as embryos or naked, sexless human bodies and offering modern statements on gender relations as well as on the decline in tolerance and racial diversity.

Hi Inlander (Hello Native), an installation featuring the Muslim burqa, was part of a joint exhibition titled "Wearable" held in 1999 at Galeri Padi, Bandung and Bentara Budaya, Jogjakarta. Here, Mella examined the term "Inlander", a derogatory word for indigenous Indonesians used by the Dutch during the colonial era, drawing an interesting parallel between what happened during that period and the events of May 1998, when ethnic Chinese became the target of killings and anxious residents, Chinese and others, hung signs outside their houses reading Pribumi (indigenous, native) or Pribumi Muslim (indigenous Muslim). Using dried frog skins to make the burqa, she sought to transcend the Muslim taboo on frogs while at the same time showing the suffocating effects of narrow-mindedness.

From the burqa cloak, which is usually worn by women in the Arab countries, is derived the jilbab, an Indonesian version. In Mella's art it developed to suggest signifiers associated with coverage of the self: representation and manipulation of the self, camouflage, masks, shields, hiding places, sanctuaries and the like. This found expression in Moral Pointers 2002, a live performance installation that featured veils made of cocoons, horns, dried animal skins, plants and other media.

In another stage, the cloak came to signify shelter. "With the reality of global migration, everyone must be ready to become a refugee." Refugee Only showed tent-like garments, distinguished between one for the commoners and one for the elite (in a more luxurious quality). In the Shelter-Me series, it became a half-architectural structure or just a shack.

Although most of her oeuvre relates to Indonesian situations, it also includes situations in other countries, one of the most dramatic being that examined in the Rubber Time Series, made at a rubber plantation during a residency in Lunagangga in Sri Lanka. In her installation performance three persons were lying on the ground in-between the rubber trees as if dead or sleeping. Their bodies were covered with cloaks she had made of rubber tree seedcases, smoked rubber and dried pored rubber.

In a recent project in Taipei, her cloaks were inspired by San-ho-yuan, the Chinese architectural principle of a central building with two wings attached perpendicular to either side. The form with the two wings was connected to the Chinese system of manually carrying goods hanging in balance on either end of a stick carried across the shoulder.

Another recent work is Zipper Zone, master of your domain, an interactive artwork that comments on the overload of images and information in the mass media and advertisements. In it, as in her other works, Mella focuses on personal identity. The work is made of zippers. The audience can select which to open and which to close. Behind the zippers are many human beings and photographs to discover, but a choice must be made which to open and which to exclude. A reflection of real life in the urban city, Zipper Zone reminds us that while we need to be attentive to many things, we must be able to skip, select and delete in order to survive and stay sane. Mella says, Zipper Zone, master of your domain is like Facebook, a site where you can find nonsense and surprises.

Mella Jaarsma is as proficient in drawing and painting as she is in her other works. It is a pity they have had less exposure.

Mella has meanwhile spent half of her life in Indonesia. But it is not a matter of being more Dutch or Indonesian, but of being human and part of the universe.

Art critic, lives in Jakarta, Indonesia. Senior Editor of C-Arts Magazine and a regular contributor for the Jakarta Post.