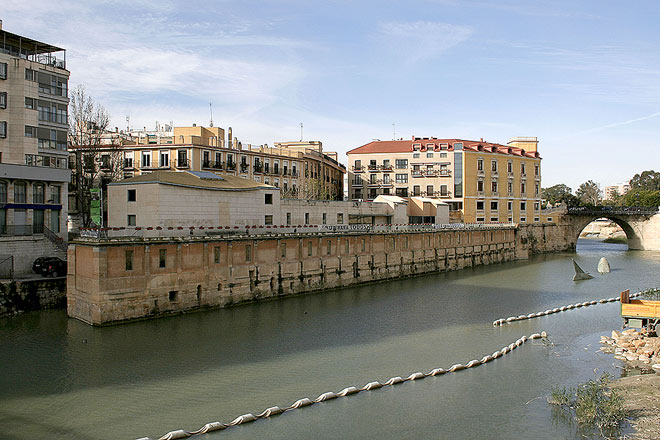 The 8th edition of Manifesta, the European Biennial of Contemporary Art, takes place in the Spanish cities of Murcia and Cartagena. It is being curated by Alexandria Contemporary Arts Forum, Chamber of Public Secrets and Tranzit.org.

From 9 October 2010 to 9 January 2011, in dialogue with Northern Africa, Manifesta 8 will explore the idea of Europe in the 21st century, focussing on the boundaries of the continent, and thus strengthening its international and intercontinental character. More specifically, the aim of Manifesta 8 will be to engage with Europe's present-day frontiers and its interrelation with the Maghreb region.

The South of Spain, specifically Al-Andalus, has been a historical blend of Islamic, Judaic and Christian cultural influences co-existing together. This is an inspirational organic ground on which the next Manifesta 8 Biennale explores new topologies and journeys.

Alexandria Contemporary Arts Forum
(Egypt, US)
Using their Theory of Applied Enigmatics as a methodological tool to work with those dominant ideologies embedded in the collective unconscious of contemporary art, ACAF’s exhibition and performance program exists as a solutions-based project wherein deeper beliefs and knowledge can be seen as signs pointing towards future and cultural innovations.

Curator / Team Executive: Bassam El Baroni
Associate Curator: Jeremy Beaudry
>> Website
>> Feature in Nafas
Chamber of Public Secrets
(Denmark, Lebanon, UK, Italy)
In the vision of CPS, Manifesta 8 is a series of 'transmissions' that critically use artistic, relational and media(ted) strategies to explore ideas of what Spain / Europe is today and focus on its boundaries and relationship with Northern Africa encouraging a questioning perspective from viewers. Within this context, CPS searches out and engenders dialogues, placing them in the public realm through the practices of media production, documentary, artistic research and aesthetic journalism.

Curators / Team Executives: Khaled Ramadan, Alfredo Cramerotti
>> Website
>> CPS's blog for M8
>> Art project featured in Nafas
Tranzit.org
(Austria, Czech Republic, Hungary, Slovakia)
Works with the format of exhibition as a multi-authorial space, an assemblage of installation, performance, moving image, text, sound, print and signage, a temporary space for negotiation, experimenting with the model of the exhibition as a polis.

In Dialogue with
Northern Africa