The Museum of Modern & Contemporary Art. Its role in the context of culture, city, and society. 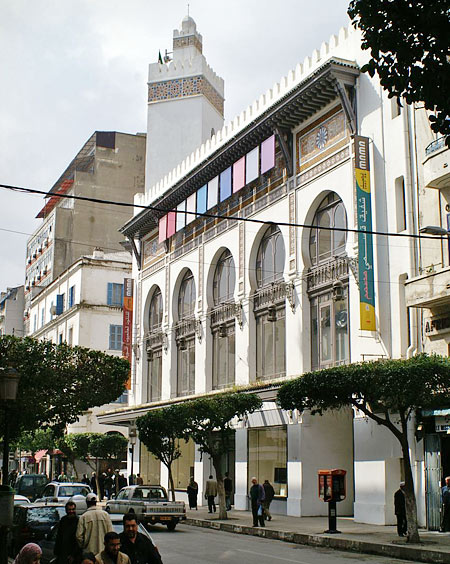 The opening of the Museum of Modern and Contemporary Art in Algiers (MAMA) in December 2007, in addition to the fact that its arrival enriches the cultural landscape, raised a number of questions within the Algerian art scene, a few of which permitted a rethinking of the very conception of the museum in countries like Algeria. Its opening provided an occasion to foreground questions of the museum’s role in our society as well as its contemporary place in the city. Too easily considered a space for storing or exhibiting artworks, today's museum in fact plays a primary role at the heart of the cultural landscape; with its social, economic, and symbolic roles, it becomes a flagship for a city’s development and for its future. It is perhaps in this spirit that the museum’s creation was envisioned at the center of the capital in the former space of the Galeries Algériennes and the Galeries de France, in a building that dates to the beginning of the last century and, more precisely, to 1909. The building was conceived and designed by the architect Henri Petit on the rue d'Isly (today rue Larbi Ben M'hidi) in the Neo-Moorish style, a new architectural style ordained by Charles Celestin Jonnart. As General Governor of an Algeria pacified after acquiring its financial autonomy, Jonnart oriented the colonial administration’s politics during this period toward the construction of a glorified image of a metropolis that claimed to protect and to respect the identity of the indigenous. From this perspective, the decision to make a museum out of this monument, which was closed for the last twenty years and seriously damaged as a result, therefore appears more as an act of cultural sovereignty than one of reopening a space and opening a museum.

Within this logic, this decision represents the culmination of a fruitful encounter between culture and politics, important for numerous reasons of which certain seem particularly significant for us. The first is that it imposes a rereading of architectural representations that originated in the last century and were inherited from colonization. It calls therefore for at least two remarks: on one hand, this action constitutes a sign of the cultural reappropriation phenomenon which today affirms itself not only in Algeria but in a number of independent countries in different forms. Similarly, at the same time as the opening of MAMA, a number of buildings and monuments from the colonial French and Ottoman periods were restored and allocated to the cultural sector, such as the Villa Abdellatif which became an artists’ residence or the Palais Mustapha Pacha, which became the Museum of Calligraphy and Miniatures. Contrary to numerous countries who are building museums, MAMA is a museum with the distinctiveness and uniqueness of being in a Neo-Moorish setting inherited from colonization; a museum was therefore not the building’s initial purpose. The desire to reappropriate cultural history and to write Algerian modern art history is manifest. This is because the museum will house all of the collections of modern art (from the beginning of the twentieth century) and contemporary art, both Algerian and foreign, and will make them visible to the public.

On the other hand, it is a decision that is part of the logic of a capital in motion, of revitalizing neighborhoods, and of urban dynamics. There is the desire, perhaps unconscious, to transform the city's urban and economic landscape because this site, at the heart of the capital and familiar to its inhabitants, is charged with contradictory connotations: reminder of the colonial period, admiration for its architectural beauty and its decorative and ornamental design, nostalgia for the time when this site was accessible to a large public (its time as the Galeries Algériennes and the Galeries de France...). Linking the quality and the type of decor (principally inspired by Hispano-Moorish architectural references and decoration of Andalusian monuments) to modern European functionality, the site itself constitutes a work of art that is admired by its visitors. From this point of view, the site’s choice puzzles as much as it seduces: it simultaneously takes after the Moorish palace, the department store, and the architectural museum, hence the difficulty of really qualifying its architectural preconceptions which contradict the formal reading habits of the academic museum. Finally, welcomed unanimously by the art world perhaps more as an additional exhibition space than as a museum for conservation, this act [of choosing the museum’s site] introduces a new cultural politics that consist of attributing new sites for fine art for which patrimony was largely limited to that inherited from colonization. Discussing this museum, the first of its kind in Algeria and perhaps in the Arab world and in Africa, the architect Halim Faïdi, responsible for its adaptation, speaks of rehabilitation: "... we created a new order... it is about a rehabilitation not a restoration: to rehabilitate is to inject a new function... the building remained but it is invested with a new sense...". Decorative work by famous Algerian artisans - cabinetmakers, illuminators, and miniaturists like Hamimouna or Belkhaznadji in a splendid sample of local artisanal art - will certainly create an interesting aesthetic confrontation with the future exhibitions of modern or contemporary art. It is however for this same reason that the architect’s concept was to dilate the space by painting it white, a neutral color, " from which the artworks pull away... because a museum of modern and contemporary art must be sober and as spare as possible in order to erase itself before the artworks...".

Moving a receptacle for culture to a place closer to local aesthetic discourse will surely contribute to changing the relationship between the city's memory and the vision of its contemporary actors. This is because the reinterpretation of colonial architectural symbols renders it a strong site/symbol of appropriation/reappropriation of the present and the past, but also an instrument of ideological transference. This calls the museum’s identity back into question and opens to questioning the relationship between memory, the museum, and its territories. Is it a site of contemporary Algerian identity? The territory of the museum of a third (or only second) millennium? In any case, it is certain that this museum disrupts the traditional image of the art museum as we inherited it from the European nineteenth century, an image which our fine art museums (inherited as such) have difficulties unmaking. This image of a romantic museum, a reserved space where art is confined like a sacred object, is heavy and complex. It contains a kind of resistance to change, a certain fearfulness, when faced with innovation and maintains an attitude of selective perception of art as accessible to a select and worldly public. As a result, many judge it as beautiful but dusty, remote, and elitist because of its ideological confiscation by the cultivated and its financing by the affluent.

Thus contrary to the majority of these cultural spaces which create the feeling of being cut off from their immediate environment due to barriers which are both physical and symbolic, MAMA, to which admission is free, is open to the world and to the street, which means it is open to Algiers and its residents; a museum of proximity, it inscribes itself on the urban map in an area of popular culture: from Bastion 23 (Palais des Raïs), the Casbah, and the National Theater, to the Algerian Cinema - all are situated on the same axis. MAMA’s space is conceived as an opening onto this highly trafficked and commercial urban route with large windows that allow the eye to directly penetrate the museum's interior; through its architecture and its innovative cultural programming, it becomes a real site of interpretation. All of these assets permit us to think that it will elude habits of frequenting the neighborhood in which it is located. Representing an element of the urban transformations, MAMA participates in the creation of a new symbolic relationship between public and civic space. The example has been made in the history of museums to Beaubourg (Paris) or the Guggenheim (Bilbao) which in a much more spectacular way, it is true, modified the landscape of their cities and, at the same time, established a new relationship between culture and memory, public space and sense space, urbanity and citizenship.

Since its opening, MAMA has housed more than a dozen exhibitions including international exhibitions as part of events such as Algiers 2007, Capital of Arab Culture, Second Pan-African Festival of Algiers in July 2009, or the First International Festival for Contemporary Art in Algiers from 17 November 2009 to 28 February 2010; because of this, it is today an unavoidable reference for exhibitions of modern and contemporary art. It is another space for the diffusion of art that is alive and open to the world; it represents a new interpretation of artworks and a new aesthetic discourse for us, about us, and about the other.