Contemporary art from Kyrgyzstan, including some artists from Kazakhstan, Uzbekistan, Germany. 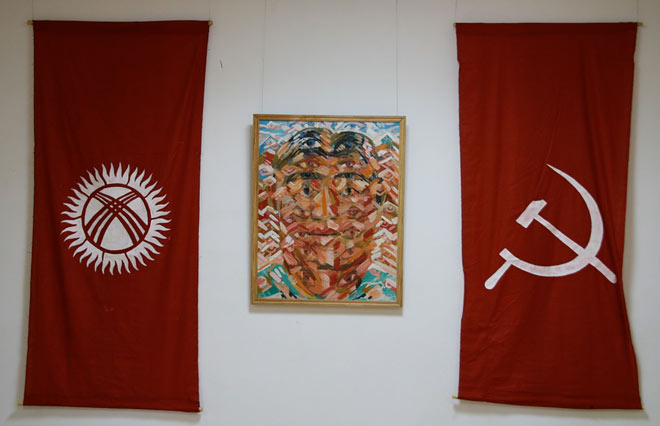 A ballot box filled with rubble and ash, ID photos like those produced by prisons and other state facilities to encompass undesirable citizens, bloodstained found objects from the destroyed buildings in Osh and Jalalabad after the wave of violence in the summer of 2010, recordings of television reports on the bloody uprising in the streets of Bishkek last April, along with an installation of children’s drawings on the same theme from the viewpoint of 8- to 12-year-olds – the international exhibition Kyrgyzstan 2010 in the capital, Bishkek, stuck mostly close to this year’s events.

The contributions of the Kyrgyz artists, with their often drastic positions, drown out the subtler works from the neighboring Central Asian countries and Germany. The Uzbek artists, for example, are more cautious; they are represented primarily by video works (Alexey Ulko, Oleg Karpov, Umida Ahmedova, the group TuprAtikonS). They emphasize the many-faceted proximity of the two countries – including among artists. With her video work Jihad from 2004, Almagul Menlibaeva of Kazakhstan recalls commonalities: the origins of the spread of Islam, the dominant religion in the region.

The artists from Germany (Michael Müller, Lätitia Norkeit, Marc Schmitz) eschew direct references to the political situation in their host country. They do not document or commentate, but – in the context of a nation in upheaval – aim to create uncertainty and perhaps self-reflection in the individual viewers of their works.

Remember: in Spring 2010, the small Central Asian republic of Kyrgyzstan suddenly moved into the focus of international attention. Starting with unrest in the north of the country, violent revolts ignited on April 7 in the capital, Bishkek, in the course of which government buildings were captured with unexpected and simultaneously startling ease. The incumbent president Bakiyev and his influential family were forced to flee, and opposition politicians came to power in a hastily formed interim government. The revolt cost at least 100 lives. The borders to neighboring countries were closed, and since then Kyrgyzstan has struggled not only to restore order and normality, but also to gain a new self-understanding as a nation. It seeks to be freer, more democratic, and more open to its neighbors, Russia, and the United States. A new constitution has already been adopted that defines the country as a parliamentary democracy, unlike its Central Asian neighbors, which rely on the power of strong presidents.

The enthusiasm after the successful revolt in April, which at the time was already dampened by worries about the future, turned only two months later into despair and confusion in the face of the actual power structure in the country, when the ethnically more mixed south exploded. Shortly before the countrywide referendum to legitimate the new democratic constitution and the interim government, citizens of Uzbek descent in particular became the targets of previously unknown violence on the streets of Osh and Jalalabad. Hundreds died; tens of thousands fled briefly over the border to Uzbekistan and are still in need of aid and shelter after their return.

Against this background, the Kyrgyz curators Nazira Alymbaeva and Gamal Bokonbaev called on the artists of their own country and the neighboring Central Asian states to reflect on this year, so historical for Kyrgyzstan, in artistic works using contemporary means. Due to the precarious security situation, planned international symposia and exhibitions could not be held, and their focus on Land Art or shamanism suddenly seemed hardly relevant under the changed circumstances. Instead, the curators aimed to use contemporary artistic positions to expand or even give new directions to the general societal discourse on concepts like "revolution", "identity", but also "violence" and "power", currently urgent for everyone. The artists are speaking up – this too is an expression of Kyrgyzstan’s unique position in Central Asia.

The curators had to persuade, on site, the artists from the partially destroyed cities of Osh and Jalalabad to participate, because after the bloodbath in June many of them were too traumatized and felt unable to work. So Chinara Choturova and Abdusamat Mirzaev of Jalalabad merely arranged Found Objects of the War – charred, broken objects of everyday use, as well as improvised weapons, that they found in the ruins of the destroyed buildings.

Less concretely focused on the violence, Saltanat Kaibyldaeva, from Osh, draws attention to the question of ethnic attributions and the complex relationship between Kyrgyz and Uzbeks in Kyrgyzstan. Her series of photomontages shows a figure that seems to be superficially distinguishable by means of a symbolic piece of clothing from the national costume – the Uzbek cap or the Kyrgyz felt hat – while remaining always the same man. The Hats quarrel and laugh with each other, but when both headgears are worn at the same time, the man’s eyes express confusion and anxiety.

Evgeny Boikov and Furkat Tursunov point out the state’s role in the ethnicization and exclusion of minorities, which goes back to the Soviet era and continues to this day. In allusion to the identification photos from the gulags, the artists present themselves as being registered in police or secret service files and labeled "different" and members of a minority by means of the Uzbek cap.

Above the entrance to the gallery, Alexander Nikolaev had a banner hung with Richard Wagner’s dictum that art that does not come out of life is doomed to die. Biting humor and drastic images dominate this art, which makes direct reference to the lived present. Anti-Stress Therapy for the People, by Nurbosin Oris of Kazakhstan, provides a handy set for everyman, complete with a miniature seat of government and explosives. Evgeny Boikov documents the barbed wire fences that, immediately after the early April unrest, closed the borders between Kazakhstan and Kyrgyzstan in order to regulate the movement of persons and goods between the two countries. A supraregional exhibition that presents itself as critically, directly, and self-confidently as Kyrgyzstan 2010 does is probably unimaginable anywhere else in Central Asia.

The exhibition was supported by the Goethe-Institut, region Eastern Europe and Central Asia, and is part of the program Competence Centre for Cultural Managers in the framework of the Culture and Development Initiative.

Contemporary art from Kyrgyzstan, and artists from Kazakhstan, Uzbekistan, Germany.