Works by 28 artists in the context of the Old City of Jerusalem, on issues related to the theme Exhaustion. 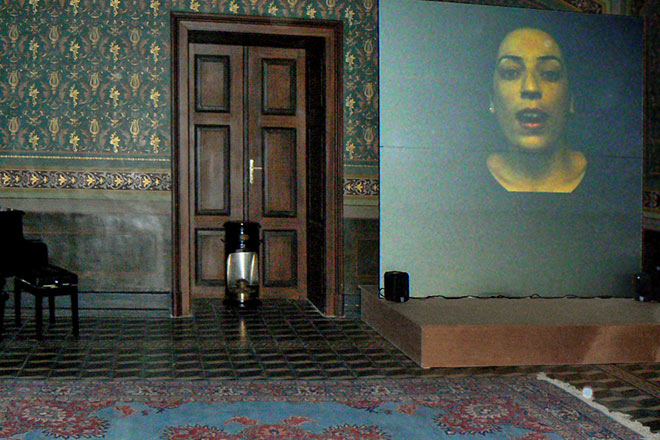 The Jerusalem Show is unlike any other art event. It is designed to reveal both the physical and political context in which it takes place and the thematically based work reflects this underlying reality. This year’s theme was Exhaustion defined as a permanent state of being for Palestinians, particularly in Jerusalem where the consequences of political failure are most acute.

Originated by the Al Ma’mal Foundation for Contemporary Art, the Jerusalem Show began in 2007. For the first time this year it was organised in full partnership with the arts centre and gallery, Palestinian Art Court - Al Hoash. Eighteen Palestinian and international artists were invited to present work that explored issues related to exhaustion in the context of the city and its environment. In some cases, Al Ma’mal curated existing works that they already knew would fit with the theme. In addition, eleven young Palestinian artists were commissioned by Al Hoash to produce new work.

The whole show was organised over eleven venues in the city, all of which have been partners or collaborators with Al Ma’mal over many years. A defining feature of the Jerusalem Show is the walking tours around these venues at night. These walks familiarise the audience with the layout of the Old City and with the usually hidden interiors of the venues themselves, most of which are quite spectacular architecturally or decoratively or both. This aspect of the Jerusalem Show creates an immediate and intimate relationship with the location that is as fundamental to the experience of the Show as exposure to the work itself.

The theme of Exhaustion was palpable after just a few video pieces on the opening walk. Raeda Saadeh’s, Drops (2010), showing the artist’s face in intense close-up with water emerging from her mouth was like watching Ophelia trying not to drown. Taysir Batniji’s video document of his performance piece Impossible Journey (2002-09), reveals a man shovelling sand relentlessly from one pile to another in a task that can never progress. The shape and texture of the curved, damp and slightly crumbling wall on which this video was projected also imposed itself on the work.

This fusing of the video image and the architectural physicality of the space added an extra visual and contextual dimension to several other video pieces projected directly onto Old City walls. These included a meditative Parisian owl in Ariane Michel’s The Round Eyes (2006) and a cat making futile scratches at a glass pane in Direct Negotiations (2007) by an artist who wished to remain anonymous. In fact there were two artists in this year’s Jerusalem Show who requested anonymity rather than risk being associated with an exhibition in ‘Israel’. This did not stop Bahar Behbahani from full disclosure, however. Her haunting video, Suspended, filmed in Tehran in 2007 was another work which completely captured the essence of the theme. A girl hangs upside down as the camera alternates between her view of things and our view of her. The rain pours down and soaks her. A fire is lit behind her. Normal things happen – cats playing, taps dripping – and still she hangs helpless and incapable of any autonomous action.

Other work that responded well to the theme was not necessarily so passive. The phenomenal performance triptych by French drummer Uriel Barthélémi was one of the highlights. He performed at three different venues with the final performance a completely improvised session intended to continue until he became too physically and mentally exhausted to play. Unfortunately, this performance was cut short after two hours because of an altercation related to neighbours not being entirely happy with the local acoustics and excited children throwing things from the roof of the building in which the performance was taking place.

Another musical highlight was the multi faceted The Breakup (2010) by American artist Michael Rakowitz. This explored the communicative collapse that led to the breakup of the Beatles in a way that drew parallels to the breakdown of political negotiations. One part of the project was a ten-part radio program broadcast throughout the Jerusalem Show on Ramallah-based Radio Amwaj. The second component was a recreation of The Beatles’ final rooftop concert but on an Old City roof with members of Palestinian band Sabreen and an array of classical eastern and modern western instruments. Extended improvisational sections and dedicated solo sequences for oud, qanoon, flute and tablas as well as lead and bass guitars, resulted in a truly unique reinterpretation of several Beatles’ songs.

Once Over (2010) by Croatian- born Vlatka Horvat, was an exploration of negotiation and strategy in the form of a tabletop game between two partners using only their hands to communicate. The table top was amplified and the exchange projected onto a screen enabling viewers to be both involved in the human drama of the performance itself and to escape into the pure audio-visual choreography of the disembodied hands.

Two other major projects were Youmna Chlala and Jeanno Gaussi’s book launch and related exhibition Home Sweet Home, which emerged from their residency at Al Ma’mal earlier this year, while a collaborative project by Portuguese artist Rigo 23 and students of the international Art Academy, Palestine resulted in a permanent mural outside the Al Ma’mal Foundation.

The Young Palestinian Artists project featured a strong body of work with the eleven artists arranged over three venues. At Al Hoash there was photography by Yazan Khalili and installation by Nisreen Najjar. Dima Hourani's N’Oreal (2010) was a cocktail of cosmetics, globalisation and occupation while Inass Yassin presented part of an ongoing project exploring the history and loss of cinemas in Palestine. Also at Al Hoash was Mirna Bamieh's delightful archive installation, Peeking Bag, Peeking Back (2010) in which objects preserved in jars of coloured water could be observed through tiny peepholes in a suspended box. This unusual splash of colour was matched by the optimistic brightness of Ice Cream, a series of ten paintings by Mohamed Fadel at the French Cultural Centre. By contrast Karim Abu Shaqra’s 2010 … 67… 48… (2010) was a distressing work painted on four panels and displayed across the entire rear wall of the African Community Centre. Depicting unflinching details of conflict juxtaposed with strikingly direct portraits and aspects of normality, the work made a considerable impact in this architecturally imposing space which also contained equally disturbing sculpture by Randa Mahda and photography by Mohammed Hawajiri. The final works in the project were Salama Safadi’s sinister video of a checkpoint experience taken surreptitiously on a mobile phone and Mouayad Amleh’s portable bus stop for use by Palestinians ordered away from the public stops near West Bank settlements.

The Jerusalem Show also presented several film screenings and artist talks. In the Al Ma’mal space itself were paintings by Khaled Jarrar and Asad Azi and photography by Jamal Jamaliev and Issa Freij including the image originally intended to be the poster for this year’s Show. Concerns about the risk of the image being perceived as too provocative eventually gave way to another poster design but not before an intense email exchange among the Al Ma'mal board. The final poster referenced the original choice by using cut-up extracts of text from these email exchanges. The result was an ingenious visual synopsis of self censorship in the context of military occupation.