The Myths & Legends Room – The Mural. An insider's view of an urban pressure cooker. 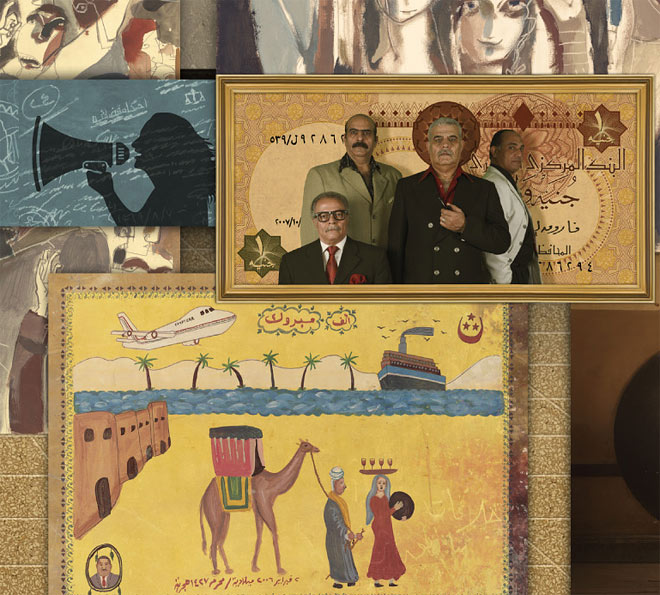 The myths and legends that Hala Elkoussy's Myths & Legends Room – The Mural refers to are not those of a distant past but of today. They are photographic tales based on historical facts, rumors, religious beliefs, traditions, and other myths and legends, conjuring up narratives through which reality shimmers: the reality of life in Cairo, the city that lies at the base of almost all of Elkoussy's works. In the vast Mural, measuring three by nine meters, their presence is excessive, albeit as if an archival completeness is sought. That makes sense, given that the Mural suggests an imaginary museum room, the Myths & Legends Room, which in turn is an unexpected itinerant wing in the Museum of the City of Cairo (whose non-existence in fact triggered this project).

The Mural is contained in a grid of 48 frames that separate its individual photographs and that is superimposed on the basic compositional structure of this massive assemblage. Three horizontal levels arrange the composition. The upper level is characterized by its connection to the sky, featuring a city skyline, Cairo University Dome, Mokattam Hill, the ethereal apparition of Virgin Mary, and more. The lower level is dominated by water, referring of course to the Nile, and a pile of debris that offers a floor to the giant black figure that dominates and balances the composition.

Artistically, this large mural exploits the ideas of the photomontage that has become ubiquitous through the advertisement industry [1]. Elkoussy uses the montage principle on a massive and colorful scale, bringing together custom-staged photographs as well as street photography, old photographs, original drawings, illustrations, and computer-generated graphics and design. Such a compilation, and manipulation, of material can be seen in details such as the stamp in the upper left corner of the Mural, based on a commemorative stamp from 1961. Here it is subtly manipulated to show the Cairo Tower – sporting an acrobat on its top – as the pointed middle finger of a clenched fist on a pedestal.

For a better understanding of the Mural's creative background, first reference has to be made to commemorative wall paintings such as those in the National Military Museum in Cairo depicting various war scenes from Egypt's history, the heroism of the military, and its popular support. The Mural hints at this reference through the representation of a scene from the October War Panorama, which celebrates the 1973 victory over Israel. In the Military Museum, some of these paintings are hierarchically centered on the main protagonist, the military leader. In Elkoussy's Mural this central figure, the Black Soldier, who sports a prosthetic cow leg and a fishing net as his sole weapon, is rather an anti-hero inspired by the Egyptian writer Youssef Idris' short story dealing with state brutality in the pre-revolution era.

The mythical and the legendary in the Mural are not only specific events. They are responses from within the highly complex entity that is the city, dealing with the overarching, imposed state control and its means of self-propaganda that penetrates the media and the educational system, resulting in political apathy and constituting an ever-changing and constantly self-stabilizing structure through the interests and belief systems of millions of pressurized individual inhabitants. Indeed, Cairo puts a lot of pressure on its inhabitants. Being the largest city both on the African continent and in the Middle East is an outcome of its incessant growth since the second half of the 20th century to accommodate the flow of migrants from the countryside looking for better job prospects. This manifests itself through the density of "informal housing" on the outskirts of the city: partially unfinished housing units, built without permits and often lacking sanitation and legal access to electricity [2]. Such dwellings are depicted in the upper left corner of the Mural, where they partially obstruct the view of the great pyramids of Gizeh. A less visible element that fuels informal housing is upward social mobility, the end point of which is – hypothetically – the numerous, relatively recent gated communities developed for, and by, Cairo's wealthy. The mobility impulse traps the metropolis in the pressure cooker and accelerates the modernization of Cairo as it tries to connect to Western standards of consumerism.

Myths and Legends Room: The Mural pays lip service to a communicative memory characterized by its preservation of simple everyday details that are passed on from generation to generation in the form of stories over a time period that does not exceed 80 years, after which it transforms into cultural memory [3]. The condensation of such stories in the Mural is an active intervention in this process. Its overwhelming archival nature brings the archival strategies of other artists to mind. Walid Raad should be mentioned here, who recovers within an artistic practice all sorts of documents concerning the contemporary history of Lebanon and its civil war. Another example is the digital media project Bleeding Through by cultural critic Norman Klein, consisting of photographic and filmic documentation, interviews, gossip, press clippings, and a short novel to revive and mystify an erased, once densely populated district in the center of Los Angeles. The archival impulse serves to make historical information present, albeit retrieved in a gesture of alternative knowledge or counter-memory. In the Myths and Legends Room, Elkoussy more specifically hints at an alternative itinerary for, or detournement of, an institutionalized and government-led museum practice [4].

Myths and Legends Room: The Mural can be seen as a critical stance toward state control in Egypt. However, it does so with a much profounder interest in the deeper layers of the complex urban community, turning an insider's experience into a magnificent outsider's view.

The Myths & Legends Room – The Mural 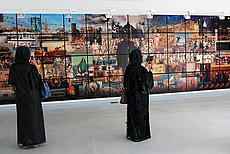