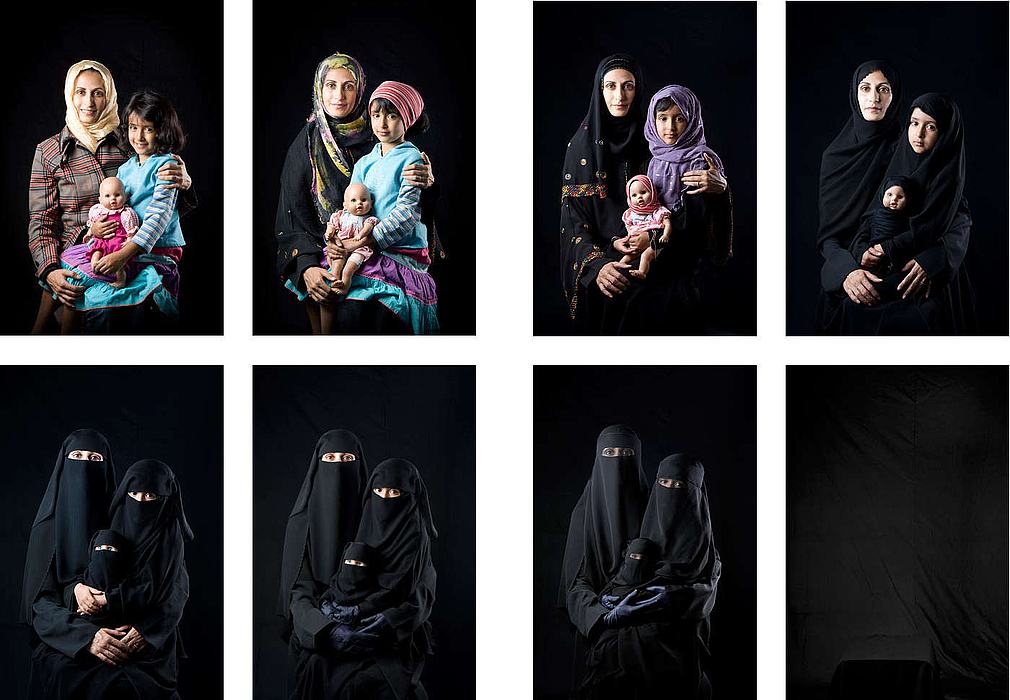 After September 11th 2001, ideological traps constructed in regards to Arab and Islamic countries have been an increasing focus of deconstruction for many contemporary visual artists coming from this part of the world. It was this concern that made Yemeni photographer Boushra Almutawakel, who was then studying in the United States, pay special attention to the words pronounced by Egyptian writer Nawal al Saadawi about the traps inhabiting views on women’s bodies. Al Saadawi, who is well known due to her critiques to the patriarchal class system and to her work against female circumcision, once said at a lecture that she felt that "women who wore the hijab or niqab [1] were the same as women who wore makeup in the sense that they all hid their true identities" [2]. Boushra Almutawakel, a pioneer among Yemeni female photographers, found these ideas stimulating and decided to interpret them photographically. As she recalls, after September 11th an increase in ‘all things Middle Eastern’ took place, either demonizing or romanticizing Arabs and Muslims. "Part of this romanticism", she elaborates, "is the way Middle Eastern women have been portrayed artistically as exotic, mysterious creatures". She wanted to challenge through her work "Western, Arab, and Islamic views and stereotypes", trying to "look at things from different perspectives and approaching the many layers" she sees in this subject.

Almutawakel’s work reflects a concern with subjects related to people in general and as she explains, with women in particular. She is mostly interested in "how women are viewed and objectified, and in subjects that relate to women such as motherhood, feminine power, couples, and women that have made a change through small or big things". Her "hijab series" is an example of this aesthetic and discursive concern that has taken her to explore some of these issues throughout the past ten years. Among her most recent work for this series are photographs that include the Fulla doll, a Muslim inspired version of the Barbie. Almutawakel, who is mother to four girls, was interested in this doll as an alternative to the type of woman represented by Barbie. She started working on Fulla’s portraits dressed in her different attires such as the traditional outdoor wear of abayas [3] and ankle-length dresses and the outfits representing different types of professions like Fulla student or doctor. More recently her work with this modest and pious version of the Barbie has involved playing with the dolls and creating scenarios where the dolls come to live certain moments of their fictive lives. Photographically, this has translated into a series of pictures depicting Fulla with her schoolmates or Fulla praying with her friends, in the way a graphic novel would have us ‘read’ the images.

This playful approach related to modes of veiling comes from a development of her work where she interrogates the way women have progressively covered their body during the past years in Yemen [4]. Through a deconstructive perspective that explores women’s bodies as covered and uncovered by the niqab, hijab or baltu, Almutawakel also plays with these stereotypes rendering women a site of playful contention. By consequence the niqab is not the center of a critique, but a means to portray women’s eyes playing and doing funny faces, a means of expression and not of rendering women victims of their clothes. The hijab might be used as a provocation to current political discourses on Arab Muslim politics, as she uses an American flag to cover the hair of an American girl. The hijab and the niqab also appear covering a young woman in contrast to the same woman ‘covered’ by make-up. Almutawakel definitely plays with the funny side of these contradictions, especially when she portrays a couple wearing Yemeni clothes that gradually uncover the woman while covering the man, ending with the woman wearing regular clothes and the man fully covered in baltu and niqab. She has and still is exploring these pieces of clothing as being an everyday life part of her environment. As she stressed in relation to the hijab, "I have worn it when I studied abroad and I wear it, I speak from my experience. It is such an iconic and powerful image that it creates a reaction immediately. Right now we have ears and eyes focused on us, this is a way to take advantage of that interest and propose a more complex approach than the one offered by the media".

These identity experiments have made her explore herself and the political uses of her culture with the intention to stay away from orientalist representations. In relation to the potential risk of having her work being interpreted as orientalist she stresses that, while speaking from her personal experience, she tries to stay away from the beauty part of it and from exotic views of the hijab. However, it is possible to argue that her work still reproduces a visual stereotype of a certain type of Muslim woman at the same time that she tries to question this very stereotype. A stereotype of a stereotype? Neither she considers her work controversial for she hasn’t tested all the limits. While assuming that her work is more oriented towards a Western public, she also acknowledges that she still feels reluctant to the reactions people might have in her own country. Although photography is gaining a recognized place in Yemeni visual arts where painters dominate a movement in the making since the 1960s, it is still a discipline that generates critiques when it comes to women’s bodies, especially if the women are Yemeni. Many visual artists coming from different disciplines share a hesitance and inclination to step back when their work approaches some subjects perceived as "limits" in Yemen (i.e. the body, religion and critiques to the government). Women’s body being one of these limits might suggest that Almutawakel’s work is inscribed among current contentious approaches. In any case, the work of Boushra Almutawakel has not yet produced an alternative discourse to dominant views of Arab/Muslim women or to modes of veiling, but might be on that track to do so. Although the artist defends certain neutrality in her approach and above all, a will to question, her work might potentially be able to transform dominant discourses from inside, especially if it privileges a Yemeni audience instead of a Western one. A wait worthwhile.