The new space for contemporary art in Istanbul opened with an exhibition curated by René Block. 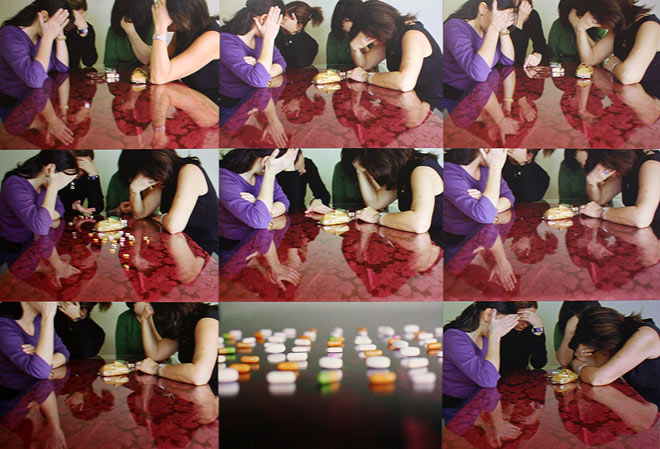 A mood of optimism on the Bosporus. Young Turkish and Southeastern European art has found a voice in Istanbul. After the private museum Istanbul Modern opened in 2004 on the Galata Pier, now the art space Arter, initiated by the Vehbi Koç Foundation, has begun its work as a forum for contemporary art on the grand boulevard İstiklâl Caddesi. And six new galleries between the two exhibition sites that present primarily current Turkish art use a joint brochure to invite viewers to take an art stroll.

A business and residential building exactly 100 years old was lovingly restored to house Arter. The beautiful, relatively slender building offers exhibition space on four floors. The special attraction is a window onto İstiklâl Caddesi, behind which an expansive green tank provides a provocative eye-catching backdrop that periodically collapses, only to rise up again, mischievously underlaying the military vehicle with an erotic allusion. The T 72 tank created by Michael Sailstorfer stands programmatically for the 160 works by 87 international artists that were on view in the opening exhibition Starter and that provide a foretaste of the 400-work collection of the Vehbi Koç Foundation. Initially, the exhibition conveys a playful and cheerful character, but when one looks more closely at the objects on display, they report on a world gone out of joint.

The Berlin gallerist and curator René Block put the exhibition together. Since he headed the Istanbul Biennial in 1995, he has succumbed to the fascination of Turkish, Arab, and Southeastern European art. Again and again he made reference to this scene, whether as the head of the Kunsthalle Fridericianum in Kassel, as a gallerist, or as an advisor to the Vehbi Koç Foundation. In particular, the Galerie Tanas, founded in Berlin in 2008 and functioning as a forum for young Turkish artists and curators, and the series of books he publishes with monographs on Turkish artists have made him exquisitely knowledgeable about Turkish art.

So it seemed only logical that he was commissioned to curate the opening exhibition Starter for Arter. It is a likeable exhibition whose spatial constraints led Block to concentrate on the collection’s small-format works. The exhibition reflects 50 years of art history and unmistakably bears Block’s signature. With the aid of older works, he makes it clear how lastingly Joseph Beuys, Nam June Paik, Robert Filliou, and Emmett Williams called art into question, expanded the possibilities of expression, and playfully connected language, images, and music in the field of the Fluxus movement. The exhibition shows how naturally the younger generation has adopted these stances and means of expression.

When the Finn Maaria Wirkkala places a grand piano upside down with its legs pointing upward as a partially mirroring image, she carries forward the game that George Maciunas, Joe Jones, Carlos Santos, and Julius Koller played with wrapped, nailed-shut, and smashed pianos. Several thematic lines run through the exhibition, showing that the younger artists are powerfully turning the wheel further. Again and again the image is used as an argument against themselves: when Ben Vautier asserts with white script on a black background that “art is only a question of signature (and) date” and Endre Tot leaves only the fig leafs in Albrecht Dürer’s portrait of Adam and Eve, the path is cleared to the pictorial language cultivated by Servet Kocyiğit, who, in the tradition of needlepoint pictures, announces in large-format, “Everything you heard about Turkish men is true”.

Again and again, the visitor encounters the motif of turning back. Natural laws are seemingly suspended, for example when Sophia Pompéry’s video has a candle burning simultaneously from the top and the bottom or when Diána Keller’s video lets the color bleed out of the flowers of a bouquet.

While the Istanbul Modern undertakes the vain attempt to derive current Turkish art from traditional painting, Starter integrates the contemporary art of Southeastern Europe in the Western European and American context from which today’s generation all over the globe takes its stances and means. Yet Arter does not aim to be a forum for the Koç Foundation collection, but rather a kind of art hall, a field of experimentation for young art not aimed for the museum. Consequently, Arter is not conceived as a museum. But what is being tested and possibly bought there will later form the foundation for a museum that the Vehbi Koç Foundation wants to erect on the grounds of the former marine harbor.

Freelance art critic and author, based in Kassel, Germany.