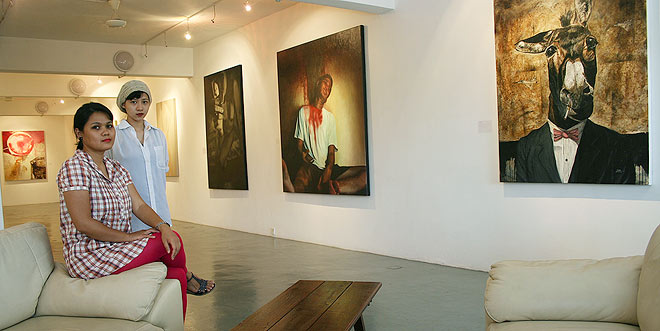 Independent art spaces in Malaysia can be pretty much described as temporary autonomous zones in the literal sense of the word. Unlike artist run initiatives in the West where a supportive art infrastructure and audience that is already in place enables long term sustainability and growth, the ad-hoc and DIY nature of many art spaces mean that they lead a vicarious shelf-life as temporary shelters to a growing number of artists attempting to establish a platform for expression in a city that is largely apathetic to the cultural value of creativity.

Therefore, when it comes to the idea of an alternative avenue for art practice, a lot can change within a year. In this article, we will attempt to highlight some of the spaces and projects that have been in existence over the past few years, showing how they have contributed to the complexity and diversity within the cultural eco-system of Kuala Lumpur.

Many that are currently in existence bemoan the lack of financial supporters who have the foresight to sponsor experimentation in the arts. Others, realizing that perhaps a physical space is no longer needed, have assumed the role of itinerant artists, shifting their goals towards community-based and site-specific projects to engage with a wider public.

In a city where public transport is chaotic and unreliable, accessibility is an issue faced by many art spaces. The Annexe Gallery's downtown location right opposite Pasar Seni train station has brought a diverse audience (e.g. tourists and students) through its doors. This physical accessibility seems to be mirrored in director Pang Khee Teik's eclectic, inclusive and alternative programming. Events have included exhibitions by artists on all ends of the career spectrum, screenings, talks, gigs, fashion shows and ambitious projects like The Emergency Festival and Seksualiti Merdeka (exploring taboo Malaysian subjects of historical communism and sexuality respectively).

Annexe Gallery has significantly blurred the boundaries between artistic, NGO and intellectual communities, and made their ideas available to a wider public. Although this exciting progress seems to have plateau-ed, the community and audiences that gather there continue to feel vital and energetic, if somewhat familiar.

Independent art spaces are characterized by the communities they inhabit and serve. Rumah Frinjan and RumahYKP are important in this respect. Rumah means 'home' in Malay. Frinjan calls itself 'interdependent rather than independent', a spirit much needed in Malaysian society so divided by race, religion, class and language. Nevertheless, their activities have been instrumental in reaching out to urban Malay youth, especially through Pekan Frinjan art fair, now in its 9th edition.

YKP is Yayasan Kesenian Perak, or Perak Arts Foundation, which was founded in 1996 by Raja Ahmad Aminullah. Built on tin mining, Perak is one of the wealthiest states in Malaysia. The capital, Ipoh, is 90 minutes drive from Kuala Lumpur. RumahYKP has hosted talks by locals and visitors (including NAFAS editors Gerhard Haupt & Pat Binder), film screenings and recently, a fund-raiser for renowned Perak-based poet Amirul Fakir, who is battling illness. RumahYKP is indicative of the essential role independent art spaces play in developing an artistic community, especially outside the nation's city-center.

In a similar vein, many other independent spaces are also communal meeting points for people who share similar interests, culture, aesthetics or concerns. Lost Generation Space is almost synonymous with a series of fringe festivals given the anti-institutional name of Not-That-Balai Arts Festival ('Balai' refers to Balai Seni Lukis Negara or the National Art Gallery of Malaysia). More recently, LGS, having moved into a new house, has played host to a number of international artists sponsored by various foreign cultural institutions in Malaysia. LGS has also reoriented their practice towards community-based and site-specific projects. The most prominent among them is Bangun Art Project, which engaged with the residents of the Chew Clan Jetty in Penang late last year.

SiCKL operates as a laboratory that has dedicated itself to the support of 'experimental' artwork. Since its inception five years ago, it has championed various performative, new media and cross- disciplinary projects through its bi-monthly show and tell platform - Open Lab. For co-founder Kok Siew Wai, being experimental means 'you create your own rule, test it out and see what will happens, or - enjoy the process of inquiring and trying. This is 'creating', it's happening now. It's a bit raw, but honest!'

The longest-running collective in Malaysia, Matahati is a rags to riches success story. Past struggles and experience with the difficulties of maintaining a committed art practice have strengthened the collective's interest in looking after the welfare of younger generation artists. House of Matahati is closely modeled after many of Yogyakarta's artist run initiatives. The project is entirely communal in scope. Besides providing artists with the opportunity to show their works, Matahati also assists in selling them, creating market demand for works by younger artists that might have been overlooked by bigger commercial players.

Rumah Air Panas was formed in 1997 by photographer Chuah Chong Yong and visual artist Liew Kung Yu as a studio space for artists. In 2003 RAP evolved to become an artist collective with a rotating rostra of 15 artists that continue to produce exhibitions, focused artist dialogue sessions and projects in the public realm. Recent large scale projects incorporating local and international artists include Let Arts Move You (LAMU - 2007) across public transport systems in Kuala Lumpur, as well Contemporary Art in School (CAIS - 2008) in a secondary school in the capital. Such projects that incorporate audience engagement, workshops, and exchange highlight RAP's desire to produce art outside of the gallery context and develop networks between artists and the community. They are currently without a dedicated art space.

Findars Space recently vacated its premises in The Annexe in Central Market in August 2009. One of the newest additions to the independent circuit Findars, since its beginning in 2008, has produced a prolific programme on experimental sound, music and visual arts. Led by a group of young artists, graphic designers and musicians such as Wong Min Lik, Tey Beng Tze and Lim Keh Soon, Findars strives to encourage a platform of self-agency that broadens the realm of creativity. Weekly events and exhibitions, co-hosted with organizations such as Herbal Records and sicKL empower graduates and young artists to contribute new lines of inquiry and energy in to the local scene.

Taking a more museological approach 12 art space focuses on research, archiving and preservation. Led by artist Shooshie Sulaiman and Fatina Alfis Zolkifli 12 opened its exhibition space in 2007 and facilitates a rigorous programme called ARCHIVE. The aim is to sensitively document and re-vision the careers of mid career and senior artists through exhibitions and publications as well as a physical archive of documentation such as press coverage, catalogues, photographs and slides. At present the project has focused on the work of Tan Chin Kuan, Eng Hwee Chu and Tengku Sabri Tengku Ibrahim & Mastura Abdul Rahman.

The Instant Café House of Art and Ideas (CHAI) is located in Petaling Jaya (the city adjacent to Kuala Lumpur). Situated in a quiet suburb, this neighborhood project is the brainchild of the long standing Instant Café Theatre Company. Initiated as a meeting space for artists to share, learn and inspire each other as well as the wider public, CHAI organizes performances, workshops, lectures and happenings to generate, incubate and enjoy ideas. The space is developing a residency programme for cultural practitioners and is currently facilitating themed monthly projects by guest curators that bring art and the community together in an informal and relaxed environment.

With newer independent spaces like CHAI and 12 Art Space offering increasingly well-publicized, well-documented and well-funded programmes, we are beginning to see a slow but gradual shift towards the professionalizing of independent spaces in Malaysia. Through some of the projects such as CAIS, Bangun Arts Project, LAMU and 12 Art Space's Archive project, a pattern emerges to suggest that independent initiatives are slowly playing a role as alternative institutions, cognizant of the impact and long-term sustainability of professionally organized projects.

Moreover, this recent development would also indicate a growing number of and increasing sophistication in art audience. In this respect, the role that technology plays, especially the use of social media platforms such as Facebook and Twitter as publicity, documentation and marketing tools, shouldn't be underestimated. We only need to look back a decade ago to see how the Internet has transformed how information is disseminated. As a nation, Malaysia is undergoing one of its most significant periods of social change brought about by the democratization of information vis-à-vis the Internet. Similarly, local independent initiatives are adapting to new challenges as they continue to locate their relevance and meaning within a society that is beginning to lend its ears to those who seek alternative creative means to express our dreams, hopes and fears.

Visual artist Sharon Chin, curators Eva McGovern and Simon Soon are managing editors of www.arterimalaysia.com, a blog that explores the contemporary art and culture scene in Malaysia and SE Asia.

Addresses and contacts can be found on the image pages