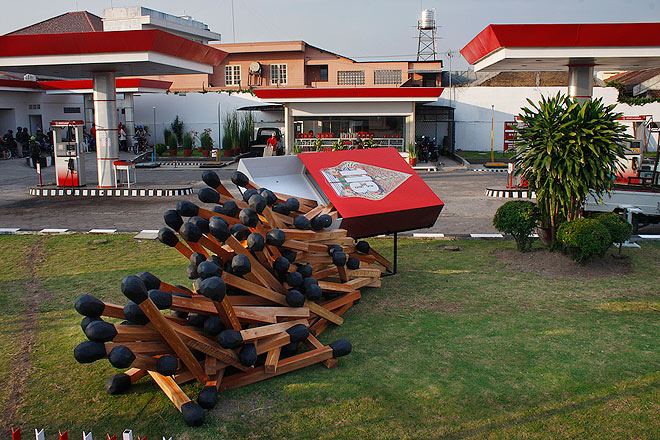 The Tenth Jogja Biennale [1] in Yogyakarta began on December 11, 2009 and lasted one month. More than 305 current works by artists from the city and its environs were on display in various exhibition venues, including in the Yogyakarta Culture Park, the Jogja National Museum, the building of the Bank Indonesia, the Sangkring Art Spaces I and II, and also on the city’s streets and in its public parks. Almost every form of expression found in the visual arts was shown: painting, sculpture, installations, videos, street art (murals and graffiti), mobile art, and Performance Art. Works by traditional masters were included in the exhibitions.

In terms of approach, thematic orientation, and curatorial concept, this Biennial differs from the previous editions. Along with the actual curatorial team of the Biennial, a long-term advisory Council of Curators was set up; its members can rotate with each Biennial. Along with public funding from the regional government, the event also received support from sponsors. Unlike the last Biennial, which was commercialized and steered by market interests and thereby provoked vehement controversy, the organizers of this year’s edition are not engaging in sales transactions.

After nine Biennials in 19 years, the committee has sought to analyze the problems and the conceptual strengths and weaknesses in implementation. The Council of Curators changed the Biennial’s focus from creative high points to the diversity of Yogyakarta artists’ modes of expression. Importance was placed on history. Of course, the development of the visual arts in Yogyakarta cannot be divorced from the political and social context, although in recent years it has also been influenced by market trends and urban life. This development parallels the path local culture is taking. So it is no surprise that this time the Biennial has been given the title Jogja Jamming, Visual Arts Archive Movement.

In addition, the historical aspect is important because of a phenomenon that concerns more than the art world of this city: its residents have a short memory for their own history. One of the reasons for this is the inadequate collection and administration of data. This negligence in documentation has reached a critical point in that the art scene has not been able to position itself in a broader context. But the goal of this Biennial is not to compile archives; it is to awaken visual artists’ consciousness of the importance of the past, which extends into the present.

Yogyakarta is a city of arts; thousands of artists live here. The city also played an important role in Indonesia’s struggle for independence and was temporarily the country’s capital; it is also considered a student city and a center of Javanese culture. The old, traditional culture is still alive in Yogyakarta and coexists with the modern and contemporary. It seems that the Javanese are accustomed to cultural syncretism, because it has continued since the distant past. No conflict is seen between the traditional and the modern; rather, they synergize and complement each other.

The same is true of the philosophies of gotong royong (traditional neighborly cooperation) and guyub (harmony), which are still practiced; great importance is placed on community as an important aspect of society. On the other hand, individualism and the culture of resistance are also tolerated. Although the nature of the social system is communal, the artists’ tendencies to individualism and subjectivity are accommodated. So it is not surprising that many artists from other cities and islands come to this city to live. This has made Yogyakarta a center of Indonesia’s visual arts; it has given birth to many art movements and approaches that have made its development seem so diverse.

It is obvious that those visual artists from Yogyakarta who are aware of history understand the various functions of art and do not limit themselves to a spirit of “aesthetic exploration”. Today, many artists are unable to overlook the chaotic social, economic, and cultural conditions and feel constantly addressed by and share in the bitterness of life… The utterly corrupt system of the legal institutions, the dysfunctional institutions of citizens’ representation, and the neo-liberal economic system (from which only a few profit) have clearly enraged people and increased their demand for change. This is the current atmosphere that the Jogja Biennale wanted to take up and make visible.

Review of the biennial, reflections on the Indonesian situation, and notable artworks in the show.
Nafas