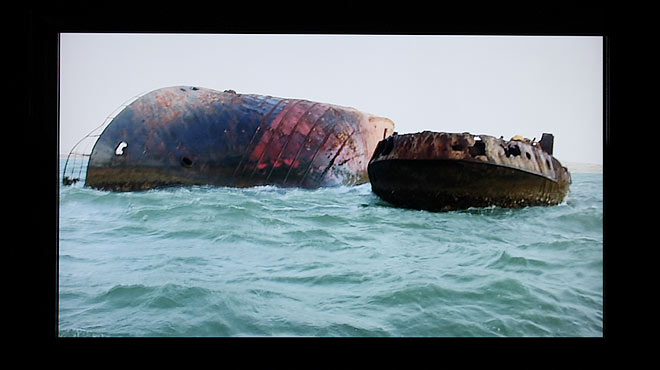 Several years ago, the majority of Sedira’s work was often labelled as either directly or indirectly autobiographical. Migration, identity and diaspora were already key themes and several works incorporated her alone or with family members. This was confirmed in her first major solo exhibition Telling Stories with Differences at the Cornerhouse (Manchester, UK) in 2004, which marked an important juncture and heralded the beginning of this new phase. Although her previous works, in fact, never focussed solely upon the autobiographical, this exhibition signals a clear rupture and cements the new direction her work has taken; for even if Franco-Algerian relations still figure as a backdrop, the sense of mystery, explicit focus on composition and aesthetics, and emphasis upon sound rather than dialogue unite these three works to create intriguing worlds that transcend local specificities and encourage universal resonances.

Set in the centre of Algiers, Saphir (2006) provides the starting point. By focussing on the landscape and terrain of the capital, the role of space and architecture there today is interrogated – creating a unique cartography that maps the continuing importance of migration and diasporas travelling between France and Algeria. Both screens focus on two silent figures: a woman described as French and of pied-noir (colonial European settler) origin, shown staying at the Hotel Safir, and a local Algerian man walking outside it and staring out to sea. The careful camerawork, sequencing and editing foreground aesthetics rather than politics, with a recurrent focus upon the colours blue and white, the distinctive rhythm generated by oscillation between motion and stasis, and a lack of dialogue or obvious narrative all instilling a powerful sense of enigma. The hotel is also shown at the heart of a transport nexus, further emphasising the themes of movement and migration and evoking a palimpsest of journeys and displacements. But this is ironic: both characters seem in a state of stasis on screen, and are framed within shots that suggest constraint; as such, a palpable tension reverberates between movement and inertia.

This dynamic resurfaces in the companion piece MiddleSea (2008) where the same male actor reappears. Set upon a boat sailing between Algeria and France – but with the direction never clearly specified – the film focuses on the journey rather than departure or destination, presenting a poetic vision of migration. The combination of deftly composed close-ups and slow-motion scenes heighten this, and the black-and-white footage connoting flashbacks further disrupts any teleology. The images’ dream-like quality underline the rejection of a documentary approach: nothing about this man’s life is revealed, and he remains silent and nameless. Furthermore, he is always shown alone: this is a personal rather than collective journey, and consequently migration becomes a solitary experience.

His isolation is mirrored by frequent shots of the vast empty sea, which is seldom off-screen and usurps him as main character. Moreover, as the title suggests, since this stretch separates France from Algeria, the theme of the in-between is stressed – repeated shots of the man walking around alone and waiting silently imply he too is in limbo. But this is a sonic as well as visual experience: the prominent soundtrack and heightened volume add further texture, and the sound collages are striking: at one stage radio wave static seems to merge with the sound of helicopters, suggesting military implications and functioning as another timely reminder of the boundaries of "Fortress Europe". Elsewhere, the hiss and crackle of a radio scanning through different frequencies – but never quite tuning in – presents communication as scrambled: amplifying the enigma but also showing how airwaves can breach land borders.

This contrasts sharply with the latest work, Floating Coffins, where what exhibition material describes as ‘the world’s largest shipping graveyard’ outside Nouadhibou in Mauritania may seem divorced from the outside world. The images here concentrate on decaying ships and in the distance show local men slowly stripping them by hand to salvage any remaining value. Despite the change in location, if one reads these three works as a trilogy, then this marks a logical progression. Here viewpoints are not single or dual but multiplied across fourteen screens of different sizes positioned on three walls. Peripheral vision can capture the three, but not all the images can be followed simultaneously: the placement and varied sizes of the screens, the assortment of images they show, and the editing and sequencing all compel the viewer to dwell instead upon particular screens in turn. The aural again remains crucial, with suspended speakers throughout the room filling the void with sound. The arrangement of the screens, connected with rhizome-like wires, suggests they form an organism in itself, whose biological rhythm is dictated by the sequenced fading in and out of images.

Indeed, unlike the earlier works, the ecological surfaces here as a major theme: this graveyard is shown as an environmental crisis above all, as well as a socio-economic and human catastrophe, with locals by extension either the mourners that tend to these "coffins" – or the living dead. Whereas Saphir and MiddleSea pivoted around the themes of travel and human migration, here departure seems impossible: the prominence afforded to these nautical carcasses decisively shifts emphasis away from attempts by the living to leave. In contrast to Saphir and MiddleSea, here nothing seems transitory: even if the ships are still afloat rather than sunken, their perpetual decaying is plainly more purgatorial than transient.

Ultimately, the Mauritanian coastline may still remain a distant world to many Western viewers, but by highlighting its role as dumping ground this powerful new work by Sedira points acutely to the stark reality of post-colonial economic and power relations.

Lecturer in Cultural Studies in the French-speaking World at The University of Manchester, UK. He is currently leading a research project, with Edward Welch from the University of Durham, on the visual representation of Franco-Algerian relations since 1954.