With sharp criticism, the Indonesian artist subverts and deconstructs icons of the consumer society. 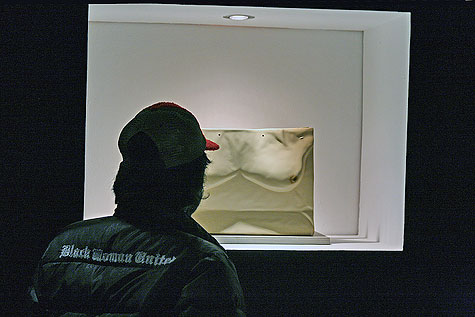 Today, in Indonesia as well as elsewhere in the world, a mall not only functions as a shopping place but has turned into a public space, a cathedral for urban dwellers: a place where people contemplate and reflect "on themselves.”

In his critical essay about city planning in contemporary Jakarta, urban cultural observer and architect Marco Kusumawijaya identifies a mall as a commercial mega-structure that has become a symbol of people’s aspirations for progress. The number of malls in a city has become a measure of how far a city has developed and how prosperous a society has become. What kind of lifestyle does a city demand, when its progress is measured only through a shopping mall? We can imagine for the cities inhabitants, that it is a lifestyle based on consumption, where the act of shopping has become a primary need.

In Window Display Wiyoga Muhardanto’s artworks consider these issues. Yet, for Wiyoga, this exhibition does not mark a new phase of artistic exploration, he has worked with similar themes for the last four years. Window Display is his first solo show.

Most of Muhardanto’s works have been produced through a careful study of three-dimensional objects, their colors, shapes, volume, and texture. This is not merely because he was trained formally in sculpture, it is also due to his inclination to seek out the symbolic qualities of everyday objects.

Muhardanto investigates the appearance and function of mass produced, everyday objects and makes unpredictable and clever associations and statements through his work. In his third year of study at ITB (Institut Teknologi Bandung), he started his series of experiments combining two different common objects, which have a close association with each other (either function or meaning). As an example, he combined a vintage manual typewriter with a glossy white container reminding us of the design of the latest laptop (iType, 2005).

Muhardanto’s artistic exploration goes further than this intention to subvert, disturb or interrupt everyday objects and consumer goods. In an exhibition titled Bandung New Emergence (2006) at Selasar Sunaryo Art Space he presented a series of weapon replicas that connote violence: AK 47, knives and handgun. Interestingly, he created the body of the weapons out of leather from imitation brand handbags. In this work — entitled LV Violence Series (2006) — branded consumer goods are transformed to resemble weapons that intimidate the consumers’ desires, pushing people to submit and surrender.

From initially combining forms and associations between objects, Wiyoga has now come to an awareness of playing with signs and meanings. In his next phase of exploration his works became increasingly critical, for example with Spinning, 2007. Combining a domestic Koran easel with the shape of a turntable, the work comments on a shifting cultural situation, especially among Indonesian youths, where religious spiritual activity has been replaced by habits such as hanging out in nightclubs.

Through his artworks Muhardanto investigates and subverts the interaction of signs. Interestingly enough, to do this, Muhardanto prefers to work in a fairly traditional way. Despite the intention to use “found signs”, instead of found objects, he never really makes use of any ready-made materials without applying his own personal touch. He tends to rely on conventional sculptural methods, laboriously recreating his pieces rather than just using found objects. He is passionate about the sculptural process.

To create his work, the artist employs a modeling technique, a process of shaping or imitating a model by hand. The technique generally takes time, and is a complicated procedure. He uses this technique as a strategy to avoid the impression that the works have been fabricated by machine, as well as to resurrect the romantic idea of sculpting to create private and intimate objects. It is no coincidence that Muhardanto’s works are very tactile, the imperfections being an important mark of the artists hand. It is important to the artist that his works are an alternative to the machine made – displaying only the perfection achievable and measurable by human ability.

One of the works that demonstrates his high-level of technical skill, in terms of it’s creation is MPV a.k.a Multi-Part Vehicle. It is a replica of a three-dimensional object that is distorted, so much that it’s original meaning is disturbed. We can recognize the reference in the work, a luxurious Japanese-made MPV (Multi-Purpose Vehicle) that has a specific passenger-door sliding system. This work is sculpted in actual size (1 : 1). He plays with the normal function of the door in a way that seems sarcastic but humorous at once: He has “sliced” the work vertically into three parts. Inside he puts a machine and mechanic rail that enables the front and back parts of the car to slide back and forth, while the middle part, where the sliding door should be located, remain motionless.

There are two works that I consider very unique: Painting as a Machine and Painter as a Machine (2008). These works transgress the borders of two-dimensional and three dimensional works. The former is a three-dimensional work on canvas made in the shape of a flat-screen TV; while in the latter, a video projector also made with canvas refers to the common practice among realist painters of using a projector to begin their paintings, rather than draftsmanship. These works refer to the commodification of painting — in particular those of photorealism — which have become hot items in the regional auction houses. In Muhardanto’s artistic explorations, he proves his capacity, not only in deconstructing and subverting signs and symbols, but also in conveying criticism in a sharp and compelling way.