Tisna Sanjaya: Etching as a way of life

Etching as a way of life. About "Ideocracy", Sanjaya's show at the Indonesian National Gallery. 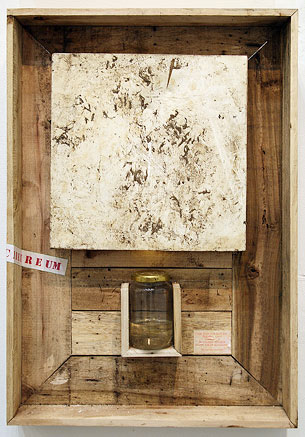 In Indonesia, graphic art has never been as appreciated as other genres, for instance, painting. This is not to say that there are no artists making graphic art. In fact, printmaking was part of the curriculum of the Visual Arts Department of the Bandung Institute of Technology, ITB, the first official school of art after Indonesia gained its independence in 1945, where the late Mochtar Apin (1923-1994) - one of the pre-eminent painters who had spent long periods of time in Europe - was a lecturer.

The teachers college in Bandung already existed as part of the Technische Hogeschool. In 1959 it was upgraded to the Faculty of Fine Art and Design of the Bandung Institute of Technology, whose orientation was toward the West and art development in Europe. Graphic art was part of the curriculum, and the initial woodcut and linocut specialization broadened to include lithography, etching, and silkscreen printing. Printmaking was also taught in other schools of art in Indonesia, and it is therefore not surprising that it became fairly popular. But while many do include etching in their work, most focus on serigraphy and graphic design.

But Tisna Sanjaya (b. 1968), an artist who works on levels of multi-dimension and extreme creativity, made etching his way of life. "Etching," says Tisna, "is like a long meditation, stretching from preparing the first layer to the end of multiple layers." When making an etching, he contemplates every facet of the process, pondering every tool and chemical used, immersing himself in the tonal effects of aquatint - which leads to contemplating the many sides of life.

Tisna Sanjaya stayed in Germany twice in his artistic career . From 1991-1994, the DAAD (German Academic Exchange Service) and the Goethe Institute awarded Tisna a fellowship to study in Braunschweig, where he obtained his diploma from the Hochschule für Bildende Künste (HBK) in 1994. In 1997 he was again able to be in Germany for a period of one year, after which he was a Master Student with Prof. Karl-Christoph Schulz (DAAD fellowship), HBK Braunschweig. Germany has had a crucial influence on his art making. Alone, a foreigner amid the somber weather dominating life in Germany, he found his inner self by immersing in his art. Nothing else mattered, he was there, alone with his creative power and, driven by his creative urges, he made his best etchings ever during those times in Germany.

Socially engaged since he was a boy and coming from a deep Muslim religious family, even at a young age he was fascinated by the early European classical technique of etching and foremost by the German Expressionists like Käthe Kollwitz, who used her art to try to change society against all odds. Tisna Sanjaya uses the technique to express a personal viewpoint, creating real meaning from contemporary existence in the Indonesian context. As a youth, he also has a fascination for theater, which became even stronger in his "German period", when he became influenced by Jörg Immendorf (1945-2007), who often produced large canvases fraught with a literal theater of decadence and stage set compositions alluding to the illusionary aspects of art, and, using color as an accent, by Otto Dix (1891-1969), the great German Expressionist, famous for his unique and grotesque style, … and Josef Beuys (1921-1986).

As he experienced his solitary seclusion in Germany, his sadness about the repression at home became even more poignant. The repressive measures of the Soeharto regime that had come to power in 1966 were affecting ordinary, innocent people and stifling free expression of any kind. Here, in the peaceful environs of Braunschweig, Tisna Sanjaya poured all his sadness, concerns, sharp critique, and annoyance into works that reflected both the power of his artistic might and a profound sense of compassion.

In his 13th solo exhibition, titled "Ideocracy: Rethinking the Regime of Etching", held in December 2008 at the National Gallery in Jakarta, this was revealed in works titled Teater, Teater Absurd, Teater Rhinoceros, Pesta Pencuri (Party of Thieves), 32 etsa membosankan (32 boring etchings), all referring to the follies of Indonesia's political stage and his profound sadness about the repression there that was not only taking people's lives, but also killing creative thinking and cultural development.

Other works from this period, like Hentikan Kekerasan (Stop Violence) and Katarsis, feature figures or faces trapped in a mesh of bold lines, revealing his sadness about what was happening to artists. Of course, his thoughts about the situation in Indonesia were intensified by happenings in other countries and his readings of international events.

The influence of the European classics continues to be seen in his more recent works that make use mixed media. The large works, a series of 14 panels titled Amnesia Cultura, a mixed media work made in 2008, is an outflow of his earlier contemplations when making etchings. It encompasses all the issues of repression, violence, and hardships, featuring his body print shaped by ash and pulverized charcoal.

Ash and pulverized charcoal continue to be part of his installations. When one of his works was burned by city cleaners who took it for waste, he gathered the ashes and put them in small bottles that later appeared as a new creation, an installation that tells of life after death. And when a fire destroyed a major book market in Bandung, he collected the remains of the fire and re-created the burned books in an installation titled Palasari.

As Tisna Sanjaya proceeds on his path of excellence, developing his creativity with media that go beyond etching, he continues to apply the thorough multi-level process he is used to as an etcher. In so doing, he retains the integrity that marks a genuine artist.

Art critic, lives in Jakarta, Indonesia. Senior Editor of C-Arts Magazine and a regular contributor for the Jakarta Post.

Ideocracy
Rethinking the Regime of Etching