From Compilation to Context

Works of the artist and the Utsch Emtschek Project within the context of the arts in Kyrgyzstan. 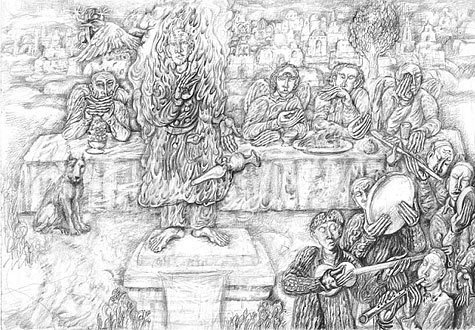 The problems of contemporary art in Kyrgyzstan are hard to understand if one doesn't see their origin in the Soviet past. In the Soviet Union, the Party cadres demanded from the artists timeliness, which the ideologists understood in their own way: the works of art were expected to react "to the most timely questions of the present", in the phrase from the Party lexicon of the time, and to reflect the successes of communist development. In protest against such directives, Soviet artists consciously turned to formal questions. That's why a typical position of artists in the Soviet Union was to create works that were abstract, but full of allusions; in this way, they could survive under the conditions of the totalitarian regime's strict censorship.

Times have changed, but the artists of Kyrgyzstan still think that clear content is detrimental to artistry. And now, when the country has tremendous social problems – the economic crisis, unemployment, a low standard of living – the works of the better-known and venerated masters of the Soviet school seem aestheticizing, hypocritical, and out of touch with reality. They do not fulfill their claim to devote themselves with their work to the world's fundamental problems. They are often simply merely speculative, and for this reason the Soviet-molded art of Kyrgyzstan can be termed salon-bound, aestheticizing, and formalistic. The situation continues to this day, and such paradoxical phenomena have arisen as salon art and an art for export. The artists create their work more for Western viewers and make little effort to be understood in their own country. And this trend is increasing.

These problems of Kyrgyzstan's contemporary art are fundamental, and a closer look often reveals interesting situations. One of them is found in the work of Talgat Asyrankulov, which is an example of a former Soviet artist successfully appropriating the practices of contemporary art.

Talgat Asyrankulov, born in 1962, is a set designer, painter, theater director, and screenwriter. In 1989 – the time of Michail Gorbatchev's Perestroika and the breakup of the Soviet Union – he completed his studies at the Art Faculty of the VGIK, the State Institute for Cinematography in Moscow. He worked as a set designer for renowned films like Sel'Kinshek (Swing) by the director Aktan Abdykalykov (1993) and Schiza by the director Gulshat Omarova (2003). It seems that the boundaries of his profession were too narrow for him, and so Asyrankulov did a lot of painting and graphic art. In 2006, he wrote the script for and directed the feature film Raiskie ptitsy (The Birds of Paradise).

He made a number of pencil sketches for the film Raiskie ptitsy that display his ability to create a narrative form. The gesture of his drawings recalls the style of Pavel Filonov. Such a compilation in the artistic work for cinema may be quite legitimate, but similar phenomena in his painterly oeuvre disconcerted many. The themes of works like those in the series Portrait of Van Gogh or Flight Into Egypt speak for themselves. The artist adapts the picture Flight Into Egypt by combining it with the theme of refugees, but this explanation seems like a mere excuse for the conflict-free, beautiful forms, which are unconvincing. What characterizes the picture are: the title after a biblical subject; the Modernist execution, which is characteristic of Soviet artists; a wealth of hidden allusions that are difficult to decipher; the familiar virtuosity and skill in imitating various styles and formations without taking a stand. One of Asyrankulov's favorite sayings at this time was the jocular slogan: "Love the book – it is the source of plagiarism." In brief, in him we have a typical representative of Soviet salon-bound Modernism.

For many artists in Kyrgyzstan, contemporary art means fetishizing of Western-style life that was forbidden in the Soviet period and a great skepticism toward the former demonization of Western culture as decadent. Precisely for this reason, it is good that in recent times in Kyrgyzstan projects have developed in which artists of the older generation are overcoming this Soviet pattern, this unconscious Soviet identity.

One of these projects was the artists' residence Utsch Emtschek (Three Breasts – the name of the village), which was curated by Gamal Bokonbaev, the author of this text. It brought artists together with the goal of using the local context and local problems as material for art for the joint work with contemporary art practices.

Talgat Asyrankulov was the most active participant in this project. He used all its possibilities effectively, and the result was several successful works. Interesting is the process in which one of the best-known works of this project, I Bow to the East – I Look to the West developed. Initially, it is merely a formal approach: to stand on one's head, simply to view the surroundings. The artist trained and carried out his headstand on the street, in his family circle, in his studio, beside the bus stop, on the mountain, etc. He needed to try out many variants in order to arrive at a laconic and yet forceful and dramatic picture. In four phases of motion, the resulting work presents the human and psychological problems in the post-Soviet republic: people's desire to find faith, and the impossibility of fulfilling it.

As a continuation of this inspiring motif of the headstand, he created the work Atlas. One's first impression is that the world weighs heavily upon the artist. This is self-praise and at the same time an ironic view of this boundless self-praise. Everyone – and especially a civil servant or representative in present-day Kyrgyzstan – is convinced that the world weighs heavily upon him in particular. Such an "Atlas" is quite simply visually underscored by taking the photo of someone standing on his head and turning it upside down. These works of Talgat Asyrankulov's, created during his artist residency, are suggestive and offer a wide range of possible interpretations.

Asyrankulov was also a member of the group Chudsovet [Chud = abbreviation for chudoshestvenny - artistic, the translator J.R.] in the project Utsch Emtschek. The members of the group carried out ablutions and baptisms in streaming water. In the project Washing – Baptism, this union through water enables the reconciliation of two world religions. De-Monstration is wordplay. It means both demonstration and anti-monster. It's funny when people, and especially politicians, work hard to flex muscles that they don't even have. On the other hand – and this sense goes deeper – funny people are shown, thereby overcoming xenophobia, which has become a problem of its own among the former "brother countries" in the post-Soviet realm. Someone who is funny is no longer alien.

Curator, critic, and designer. Trained as an architect. Lives in Bishkek, Kyrgyzstan.