By Nur Hanim Mohamed Khairuddin | May 2009 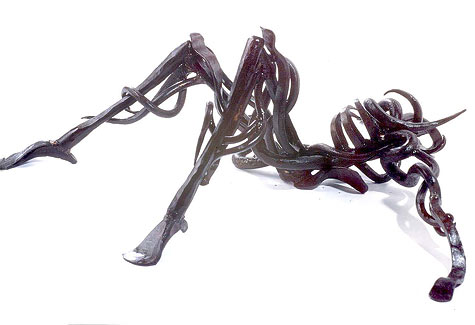 Born in 1967 in Kuala Kangsar, Perak, Shahriman graduated from the University of Technology Malaysia in 1990. He initially enrolled as a painting major but in the fifth semester he shifted to sculpture. In 1994, after three years of teaching at the Malaysian Institute of Art, he moved to his hometown to become a full-time artist and to live nearer to Nature, Religion and Culture. In his quest to improve his metalworking and metallurgical knowledge, he visited ironsmiths in the area. The traditional method of keris making that he learned from them later plays a substantial role in galvanising the qualities of his sculptures.

Until now, Shahriman has produced at least six sculptural groups. Most of them are derived from his fetishistic passion for the practical and mystical romanticism of weapons and the poetics of human motion in battle. Killing Tools (1994) signals his nascent foray into the Malaysian art scene. By incorporating deadly objects of war, he continues the violence of subject-matters evident in nearly all his past oeuvre. By fabricating keris and swords from scrap metals and turning them into ‘functional sculptures’ of pure aesthetic pleasure, he does not only subvert the social-cultural quintessence of Malay weaponry but also deconstructs its functionalism and mythic protocols. It is his first solo Gerak Tempur (1996) that marks his influential standing in the local art world. By fusing discarded auto parts with hand-made structures, he assembles vicious but elegant free-standing warrior-figures brandishing menacing yet attractive lethal weapons. Considering the lack of significant prototypes of figurative sculptures in Malaysian art, Gerak Tempur highlights some remarkable sculptural aesthetics: skeletal, atectonic and asymmetrically balanced forms; anatomical elements stripped down to abstract bones, joints and tendons; near-perfect body proportions; expressive textured surfaces; animated gestures, fluid movements and violent attitudes that convey dramatic tension; and an ingenious scheme to manoeuvre the notion of aniconism.

After this seminal series, he appears to be imbued with a feeling of guilt for having made human-like statues. Api, Bayangan dan Kemenyan (1998) and Semangat Besi (2001) indicate his attempt to reject all figurative references. The free forms in the former set are composed in elaborate gothic style with sharply defined curves, coils and pointed edges. Particularly in the later group, a collection of stylised weapons and lyrical wall assemblages bearing biomorphic expression, he begins to abandon found objects and to focus on hand-forged metal parts. His disappointment with non-representational products at this juncture encourages him to embark on his fourth solo. Although he revisits figuration, he hopes to resolve his aniconic conundrum. Headless figures in Nafas (2004) do not feature the mechanical outlook, aggressive expressions and weapon appendages of Gerak Tempur, but they enhance the sensuous movements of previous series by way of sinuous curvatures of calligraphic elements fashioned from forged iron rods. In the Langkah Hulubalang series (2008) Shahriman makes one crucial improvement to the Nafas pieces by appending a simple, blank facial component to his warrior’s body as way of a head. Bird-like heads in the accompanying sub-series metamorphose from traditional images of keris handles.

One striking point discernible in his creations is his penchant towards formal, technical and structural problems. Uppermost in his mind is what best epitomises the idea of the artwork as a thing-in-itself independent of extra-visual concept and solipsistic discourse. He harnesses the power of imagination and craftsmanship to intensify beauty of form without much regard to cerebral undertone. He considers the physical manifestation of the sculpture more important than any meaning supposedly embedded in them. Foremost, he wishes to keep viewers’ sentiments rooted in the visual significance of the shape and space, the pattern and rhythm of his pieces.

Shahriman’s aesthetic and philosophical forte lies in his figurative constructs, explicitly via their physical appearances and implied movements. He is inspired by various attributions and embodiments of the male body. He deals with emotive neo-expressionist forms to fit the violent subject of his art and to act as a vehicle for his restless gothic energy. Moreover, the cyborgs and human-machine hybrids aptly correspond to the cult of the warrior in this post-industrial age with its omnipresent simulacra of super heroes, battle fronts, and terrorism. In absence of facial expression and the capacity to ‘speak’ –as the majority of his figures are ‘headless’– Shahriman conveys his messages through their actions and motions. Into these naked human bodies he likewise pours his emotions, in search for a deeper spiritual meaning.

Over the years, Shahriman has transformed the appearances of his sculptures. The earlier pieces look robust and intimidating; the ones that make up the Nafas series are more refined and contemplative. This change of forms corresponds to a change in his technique, which is circumscribed by what he wishes to achieve vis-à-vis material treatment. He overcomes the limitations and exploits the potentialities of his media according to the sculptural features he has in mind. The moods of found objects, forged metal parts and wrought iron rods condition the physical feelings of his artworks. Utilising a range of blacksmithing processes and tools, he works in such a manner that the materiality and essence of the metallic materials intertwine with his abstract idea. Additionally, the forceful action of hammering, bending and twisting metal pieces does not merely influence the dynamics of his works, it greatly appeals to the aggressive temperament concealed behind his medium physique and gentle demeanour.

Several critics regard Shahriman’s sculptures as having permeated with the ethos of Malay amuk, the ethics of Sufi spiritualism, or the codes of postmodernism. Others consider his oeuvre simply stipulated by his socio-psychological conditions. Shahriman nonetheless declares that his constructions are devoid of lucid narrative content and absent of deliberate allegorical and symbolical insinuations. However, when we first encounter his sculptures, they arouse immediate pictures of power, transgression, and death-instinct. His representations of a horrifying body illustrate the presence of the macabre images that have been dragging us round the dark side of reality. They eulogise violence, terror, and sadism as the roots of human sublime emotions. These compositions evoke our sense of erotic paganism, dramatic barbarism and tragic consent without sarcasm, without humour. In awe of the primal, haunting magnificence of Shahriman’s metal sculptures, we let the paradoxical beauty of the violent spectacle of their killing tools and dancing warriors cast a spell on our sight and psyche.