Tape Republic - a project about the multiple uses of brown tape in Istanbul's Laleli district. 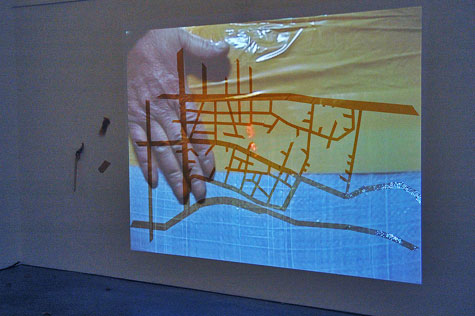 Istanbul is a patchwork of commodity zones, where specific types of products cluster together, classifying themselves and the neighbourhoods they inhabit. For example, leading down to the Galata Tower is the 'music hill', so nick-named for its series of shops that stock musical instruments and DJ hardware. Just around the corner is the 'lighting district', a glittering constellation of window displays, each one hosting an array of chandeliers, lampshades and behind the scenes switches and bulbs. Classic tourist hubs of similar same-zone products include the Egyptian spice market and the fish bazaar. Then there are the more locally frequented such as the sewing machine floor in IMC and the hardware street of Karaköy. The repetition of what is for sale in each of these areas is phenomenal. Shop after shop will seemingly sell almost identical produce, leaving unacquainted passers-by with concerns as to how anyone makes a living. Yet, despite occupying prime, central city territory, many of these shops are just the display floors for trade purchase, where bulk acquisitions of a particular light fitting, or reams of cloth are made.

Istanbul's most famous production-lines include those in textiles and finished garments, with 'made in Turkey' a common tag on multinational fashion brands such as H&M and M&S. There is one district in the city that caters for a precise genre of lower-level clothing 'brands'. Common name tags include Red Star, Romana Botta, Collins, Motor Jeans and Junker and these all generally migrate east rather than west. This district is Laleli, an area of around two square km that contains over 50,000 shops all selling ready made textile garments to ex-Soviet countries to the tune of $5 billion a year. This extensive business apparently all takes place off the record in what appears to be an inner-city, unregistered, tax-haven.

Every day hundreds of packages of clothes are dispatched by boats and trucks first to the Ukraine and Bulgaria before they are dispersed further afield. Until 2001 these parcels would accompany flying customers as luggage, but since 9/11 the airlines started to refuse such packages, not because of them being overweight or because of custom issues, but because of the way they were wrapped - with brown tape, lashings of it, sometimes covering every inch of the black sack or cardboard box containing the product within. It is this extreme use of brown tape that caught artist Osman Bozkurt's interest and not only its application on the parcels, but the fact that its popularity has become something of a local obsession, with its stickyness and usefulness meaning that it ends up everywhere in Laleli.

Bozkurt's work Tape Republic (2009), first shown as a large, multi-faceted installation in the exhibition Europe XXL at Lille 3000 (2009), is a homage to the district of Laleli and the unlikely product that has for him come to classify it more so than its textile trade. Bozkurt first began documenting the multiple uses of tape on the streets as a short-term solution to fixing broken handles and dummy limbs, marking territory, softening the edges of road bollards, to contain escaping electric wires within their lamp posts and even to replace - with thick stretches of back and forth action - the missing woven seating of chairs. These simple ways of 'getting by' and 'making do' are common sights in Istanbul, yet here the tape's prolificness forms a visual unity and classifies Laleli's preferred tactic of improvisation.

The street-found subsidiary and non-official uses of brown tape are the remnants of a more industrial approach to its application by the local cargo companies. One cargo company even requests that all packages it handles are completely covered by brown tape. The resulting indistinguishable brown, shiny lumps are then tagged by marker pen with the numbers or text that refer to their destination, although given their visual uniformity it is obvious that many must go missing in transit.

In the installation Tape Republic a selection of these packages take center stage. Without an assigned destination they sit in the gallery space as sculptural entities and as a sort of memorial to the final products of Laleli's activities, before they become untraceable, caught up in a system of diverse distribution. In the gallery space the packages emit recordings from small speakers hidden in their interiors that play out the sound of brown tape being drawn, sliced and applied, over and over again. This never-ending rhythm links to a film that captures the skill and speed of two cargo guys precisely wrapping their products. It takes about two rolls of tape to cover an entire sack or box and there is a clear pattern of application that has been mastered over the years. A special technique for breaking the tape involves rapidly creasing a section sticky side down and then speedily tugging at each side so that it splits at the fold. Then come the handles, which are spun and tweaked into shape. Like the lessons of the tape's potential usefulness seen in Bozkurt's photographs his film uncovers another unknown skill of convenience – the cutting of tape without a knife or scissors, a trick that every visitor to the exhibition will later try out at home.

Tape Republic collects all the little nuances of Laleli and its tape obsession in order to refer to much larger global circuits of production, consumerism and distribution. While Bozkurt puts on view a micro world that is unregistered and unregulated, it is a pool of activity that supports so many people and links into a regional network with historical and cultural precedents. The free use of tape in Laleli, is reflected in Bozkurt's works where he allows it to extend beyond the parameters of Tape Republic. The sticky substance with its pungent chemical smell, hangs uncut from the edges of the photographs it supports and unfinished rolls remain ready for future use on the floor. And so, like the unregulated world it contains in Laleli, the tape is in Bozkurt's work both specifically applied and at the same time left to its own devices, a metaphor for a community that binds itself together through a system of shared aspirations and the possibility to remain flexible.

Associate Director of Programs and Research at SALT, Istanbul, Turkey.

Part of the event
EUROPE XXL