The Syrian photographer scrutinizes Orientalism using its own language and inner contradictions. 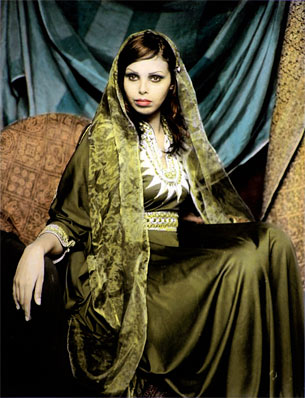 The relationship between the "West" and the Arab World at the turn of the XXI century requires reinforcement and regeneration due to the international political events and circumstances of the last years. The need to encourage cultural meeting points and to promote profound mutual awareness is essential.

The work of Osama Esid is a visual manifest of this relationship, investigating the social preconceptions and stereotypes that have been created on either side in the past, and which in some way still persist in our collective unconscious. The inquiry into "Orientalism", with its exotic and sensual connotations, from an artistic contemporary point of view generates a huge range of creative and theoretical possibilities which reveal the existing contradictions in the creation of clichés. The exhibition "A Play on Representation; The Egyptian Experiment" reopens the debate on these fundamental issues which unite East and West and which once so concerned Edward Said. If we follow his interpretation, the West constructed a beautified and alluring image of Orient, a fantasy which, we must not forget, was part of a precise historical moment, and responding to an imperial agenda it was designed to contain and control the Orient. Thus Said dismantles the concept of Orientalism in a negative way.

It is exactly Said’s negative presumption which Osama Esid questions in his photographic oeuvre. Apart from the Imperialist discourse it stems from, can nothing positive be derived from it? For Esid that image of Orient constructed by the West also penetrated the East, "the oriental fantasy exists on both sides". Furthermore and here is where Esid’s motivation and inspiration lies, one can inquire into a stereotype to create new interpretations using its own language and mechanisms and feeding on those same inner contradictions, without needing to pigeonhole a culture.

Thus in the "Orientalism and Nostalgia" series, Esid reconstructs a theatrical period scenario but displaces it in full XXI century in one of the most important capitals of the region, Cairo. The aim of each piece is to acquire the atmosphere of those old vintage pictorialist photos, where beauty becomes the main protagonist. He highlights the more sensual side of Orientalism, referring to those essentially feminine spaces which also remind us of French XIX century painting. He retrieves the sensuality and eroticism in the gaze and enticing pose, although endowing his women with a defiant intensity, no longer passive and complacent, but on the contrary women who are in control of their bodies and their destinies.

By acknowledging beauty in this context, Osama Esid brings forth another representative twist, which is to try to modify the current widespread vision of his region, one characterised by images of war, terrorism and fundamentalism.

On the other hand, the "Workers of Cairo" series presents a direct contemporary account of the most common professions and jobs of this immense metropolis. Once again, however Esid portrays it as if it belonged to another time, endowing his models with a timeless quality. The strength of this series lies in forcing both the Western and Eastern audience to observe those armies of average men who create our day to day lives, the mundane heroes, who we refuse to acknowledge and would prefer to ignore.

The questions that derive from the work of Osama Esid and this play on ways of representing the "other", are: How do Westerners perceive those they denominate "Orientals"? And, how do both Westerners and Orientals represent those they call "others"?

Organized by Casa Árabe, the exhibition "A Play on Representation; The Egyptian Experiment" by Osama Esid was presented in the Spanish cities of Córdoba, Jaén, Tarifa and Granada, 2007-2008.