Definition and translation in relation to local and global understandings of art from the Middle East. 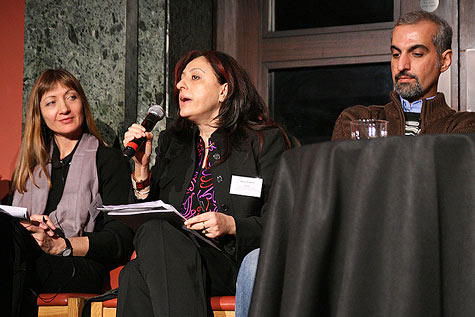 The interpretation of works of art is contingent upon a range of factors connected to the history, society and culture of both the works and the interpreters. Even in an age dominated by the visual, interpretation and translation are essential tools, although ones which inevitably bring their own complexities. We know that the meaning of an image is constructed – and that the word is part of that construction. In the case of modern and contemporary art produced in the Middle East, the relationship between the visual and the verbal is further complicated by a raft of factors that I argue currently hinder the advancement of knowledge in the field.

Firstly, there is the issue of the contested terminology used to identify art made in the region. The session devoted to ‘Defining the Middle East’ at the conference ‘Contemporary Art in the Middle East’, held at Tate in early 2009, revealed the critical and sensitive nature of the issues involved in what otherwise might appear as simple of problem of nomenclature. Many of us working in the field find ourselves continuously justifying and explaining whatever terminology we use in the absence of any consensus about this question.

The geopolitical term ‘Middle East’ is of course epistemologically misleading, located as it is within the constructed oppositional binary of East and West. Moreover, it can be thought of as propagating a rhetoric of hostility. How could the term represent the region’s culture, as is always asked of its art, neutrally? Although contemporary discourse calls for the acceptance and celebration of difference, in the Middle East as elsewhere, there seems to be no escaping the essentialising of the region, with its still persuasive imaginary legacy within western consciousness. In western media the Middle East is often depicted as an unchanging monolith with its roots in the doctrines of an ‘aggressive’ Islam. Consequently, a positive review of an exhibition or cultural event will note something to the effect that ‘the Middle East is not only about terror and terrorism’. Such a statement immediately locates the artworks and events within a non-aesthetic realm.

At a local level, artists within the region constantly question the validity of group labels. What do Arab countries, Iran, Turkey and Israel have in common? The question of course is particularly loaded in relation to the inclusion of Israel. If one can argue for certain commonalities between Arabic-speaking countries, and accept that Turkey and Iran have a long shared history and overlapping and intersecting cultures with Arabic countries, how can the inclusion of Israel – with its very recent creation and modern history, one that it is closely bound up with Western powers – be justified?

Occasionally used as an alternative, the term ‘Islamic art’ is generally rejected because of its pre-modern connotations. Arabic-speaking countries (excluding Turkey, Iran and Israel) are generally grouped under the heading of ‘the Arab world’, which in turn can justify the use of the term ‘Arab art’. Personally, I feel the term is valid because it recognises the countries’ shared historical, linguistic and cultural roots while not diminishing the differences between them. Many Arab artists, however, accept this designation only reluctantly as they would rather highlight the particularities of their own cultures, and because they reject the term’s connections with a Nasserite ideology of pan-Arabism.

In the end there is – currently, at least – no agreement about a suitable term for the visual production of the region. This is perhaps a problem today for all geographical regions in an age that is obsessed by categorisation but, at least rhetorically, simultaneously rejects essentialisation. Significantly, this is a problem that seems magnified in the English language. In Arab countries artists have other concerns and are baffled by western preoccupation with this issue. In their eyes, they are Iraqi, Palestinian, Lebanese etc. artists, and Arab, too. This does not negate the importance of the issue nor relegate it to one of linguistics. It does, however, correctly locate the discussion within a Euro-American discourse, given that meanings attached to the terms were constructed largely outside of the Arab world anyway.

Beyond the issue of a loaded terminology, cultural interpretations are further problematised by the use of the outdated Euro-American dialectic of tradition versus modernity in discussions of contemporary art in the Middle East. In order to alleviate the guilt of having excluded large parts of the world, including the Middle East, from discourses about modernity, postmodernism has proposed the notion of ‘alternative modernities’, arguing for multiplicity in place of an unchanging and unified notion of modernism. But, as the American literary critic and theorist Fredric Jameson has argued, this notion neglects one of the fundamental aspects of modernity, that is, ‘worldwide capitalism’. [1] Moreover, the term ‘alternative modernities’ appears to seek to forgive modernity its aggression. [2] Articulating difference through this concept, however, not only does not absolve modernity of its antagonism but it also does not allow for that difference to be seen as autonomous, as it is generally continuously compared to a superior western modernity. At best, the phrase attempts to explain why certain developments in the Middle East followed a path different from that adopted in the west.

Most writing about art of the Middle East comes from Europe and the United States. In principle – and in the age of globalisation and fluid connectivity – this is not a problem. Positioned outside of the local centers of production, this critical writing, however, is often disengaged from the historical development of the art it describes. There is little scholarship about modern art but, instead, an ever-growing number of exhibition catalogues arising from the increasing number of contemporary shows of Middle East art. The move from a period of invisibility through to one of celebration of everything related to the Middle East has fostered a sense of discontinuity, with contemporary production being seen as a new, detached phenomenon. This decontextualisation is echoed in the displacement of centres for interpretation from the region itself to outside the region, a trend magnified by diaspora and the mobility of many contemporary artists. Soon much art of the Middle East may prove to be only remotely connected to the region.

This situation, of course, affects local perception and reception of contemporary visual production. If the meaning of works of art is constructed according to Euro-American methodologies, terminologies, theories and rhetoric, how can it also negotiate the local realities of the Middle East? And how can knowledge produced about this art be translated in ways that will be understood locally? [3]
Disparities between the global and the local tend to be exacerbated by thematic exhibitions curated in the Euro-American sphere by non-local curators trained in art of the Western world, who also end up producing most of the literature on the topic as well. Most themes of exhibitions adhere to what I would term a neo-orientalism – a new Middle East constructed in the West in response to traditional orientalism, whether as a reaction or correction. Of course, with growing interest in the subject, there is an increased number of initiatives that attempt to build understanding. However, the field is framed by certain standards which will continue to shape endeavours in the years to come (just as certain aspects of traditional orientalism have survived into modern discourses despite the seminal work of Edward Saïd). And there is a continuing gulf between curators and scholars in this field, with curators having the greater power to shape discourse.

Finally, I would note that this displacement of centres of knowledge production has affected the development of art education and art history within the region. As an educator based in America, I am constantly challenged by the lack of resources available to help teach the arts of the region. This problem is of course far worse within the Arab world, where there are few resources available and most of these are in English or French. Nevertheless, some ambitious institutional initiatives around the Arab world, as well as new research and critical thinking by an increasing number of younger scholars, signal possible fresh directions for the field’s future advancement.

Commissioned by Nafas Art Magazine and Tate, this article is a response to themes discussed at ‘Contemporary Art in the Middle East: A Two Day Conference at Tate Britain and Tate Modern’, held in January 2009. Supported by the World Collections Fund.