The artists of the collective address history, identity, cultural and social changes in Malaysia. 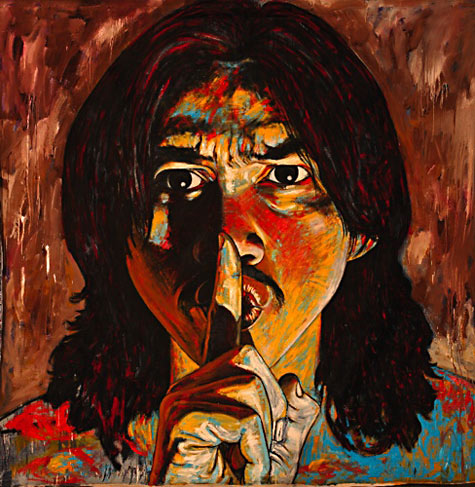 Registered as a cooperative, the MATAHATI (translated as the 'eye of the soul') is a group formed by fellow students from Universiti Teknologi Mara (UiTM) who graduated together in 1991. Originally the group began with 7 members: Ahmad Fuad Osman, Ahmad Shukri Mohamed, Bayu Utomo Radjikin, Hamir Soib @ Mohamed, Kamal Ariffin Kamisan, Masnoor Ramli Mahmud and Soraya Yusof Talismail; and as the group evolved it narrowed to the 5 members who continue together today. The aim of the group is met through their regular exhibitions together and through the function of the group as a support structure that each artist can rely on as he develops his practice, as a sounding board for new ideas and methods of working, or as an additional pair of hands where needed.

As the MATAHATI emerged from university, the climate they encountered differed from the days of Malay revivalism that may be traced back to the National Cultural Congress in 1971, formed as a response to the race riots of May 13, 1969, that called for affirmative action. Malaysia in the 1990s had been transformed by the social, economic and cultural changes and challenges of the earlier decade. With new aspirations and a ‘new sense of pragmatism’ their concern was for larger societal issues, "replaced," in Redza Piyadasa’s analysis, "by the readiness of some Malay artists to overcome their self-conscious ethnicity"[1]. Piyadasa cites Bayu Utomo Radjikin’s Bujang Berani (1991) as an exemplification of this emphasis on the social condition, addressing the issue of cultural displacement that engaged not only to with local contexts but also suggests universal bearing.

That the group would address far-reaching subjects beyond national or domestic concerns, or at least while broaching local content reflect as well on its contextual underpinnings, points to a shift in position on the role that art would play in their time. The distinction lies in late Krishen Jit’s suggestion that "in one significant respect, these artists have a common sensibility: on the whole their art is infused with a social context. This orientation is also revealed in their rejection of the individualised and heroic gestures of art, and their recovery of the figure as an invigorating narrative strategy"[2]. For example the importance of Malay and Islamic vocabulary and content in probing issues of identity, both social and personal, emerges for these artists in a more unrestrained meditation that is open to imagination and ambiguity in expression. Hamir Soib @ Mohamed’s work Jawi II (1999 - 2008) presenting sheets of paper inscribed with Jawi texts embossed in Braille confronts audiences with their lack of fluency in Braille in as much as they might also be unfamiliar with the Arabic script. As he describes of the work, "Jawi is a most valuable treasure to unite the Malays. Not a secret code but something other people must learn in order to use and have control of"[3]. Hamir’s comment on the need to regain control of one’s identity reveals the heart of the matter as a necessarily personal undertaking rather than through a performance of outward displays and trappings. His approach reconciles for himself, and in a way for the MATAHATI as well, the engagement with faith in private edification rather than public exhortation. In Bayu Utomo Radjikin’s Qiblat (2006), the warrior figure, is a "metaphor of this spirit who becomes a source of support and protection for the individual through his life’s journey"[4], and here the warrior appears to be caught in the midst of seeking direction and perhaps is an entreaty as well with the rehal and mace as tools aiding this particular search. Likewise Ahmad Shukri Mohamed’s Messenger I (1998-2008) binds the search for one’s identity sought through religion, social and cultural experiences into one single journey, and Masnoor Ramli Mahmud’s Kantangku (2004/2007) based on a poem by Jalalud'din Rumi explores attempts to unite with the divine, where the interjection of the personal demonstrates and surfaces the marginal and the contingency in human and social experience.

The topic of violence is also raised in their work, not in strident tones, even if they are unflinching in their presentation, as seen in Ahmad Fuad Osman’s Lost series #9: The Drowning (1994), Bayu’s When Humans Treat Humans (1993), as well as Masnoor’s The War that Never Ends (1995). These early works by the artists appear to abstract and aestheticise the violence they attempt to portray, however the representation then also serves to problematise the nature of the portrayal of savagery and power today in a media saturated environment. Of local politics and social discourse they are a bit less restrained while maintaining a consistent visual appeal. Fuad’s Syhhh...! Dok diam-diam, jangan bantah. Mulut hang hanya boleh guna untuk cakap yaaa saja. Baghu hang boleh join depa... senang la jadi kaya! (1999), recording observations on local politics of that period, and Hamir’s Rapuh (2007) which takes the distinctive form of a plain biscuit one remembers from childhood and imprints it with the words ‘Merdeka, 50, Malaysia’, references the sentiments of celebration of the country’s 50th year of independence through with a biscuit that is both familiar gratification yet fragile and delicate, are examples of a need to speak out if not for a community, for themselves.

The strategies employed by the group in dealing with these broader issues is to take them close to home. In Shukri’s early work Cabinet V (1991) he calls attention to these cabinets that are ‘the first thing that strikes a person entering a house’[5]. Here, the domestic cabinet as ‘conveyors of wealth, well-being and self-hood’[6], is made playful even as it is an interrogation on desires for a superficial social identity. Environmental concerns specific to the Malaysian landscape and context are also broached in their work, such as in Hamir’sAir Yang Sangat Dalam (2005) and Shukri’s Warning! Tapir Crossing I (2007).

The dismissal of the modernist desire for the unassailable grand narrative, or alternatively the imposition of a necessary interpretation by grand narrative, and this manner of embracing certain doubt would appear liberating. In Masnoor’s Nobel Untuk President (2007), we may read a sense of openness and possibility, for why not a Nobel Prize winner for President. What these works highlight is that these limitations once confronted are not quite so inviolable. In Fuad’s performance The Hair Piece / Peace (2004), he has his audience assist in cutting hair he has been growing for the past 5 years. This offer of leaving a most personal aspect of himself in the hands of others is an act of trust and respect for the other. As locks of hair are cut off, words he has written on his back of categories he is assigned ‘Male’, ‘Malaysian’, ‘Asian’ and ‘Muslim’ are slowly revealed to the audience. The performance which took place in Vermont in USA was attended largely by non-Asians, non-Muslim and non-Malaysians, and here these labels then were shown for what they really are, signs made by hand, no more, no less. In Recollections of Long Lost Memories #8 (2007), Fuad presents a collection of altered photographs of historical and social events that create for the audience a series of ‘false memories’ inspired by how history often is told by its victors and those in power. Here the artist takes it upon himself to redress history with a filmmaker whose cameos act as a counterweight to these apparently significant events, summing up as well the journey the group as a whole has taken - as individuals, each in their own way seeking certain satisfaction in making a part of this larger history count from their own point of view.

Independent curator, based in Singapore.