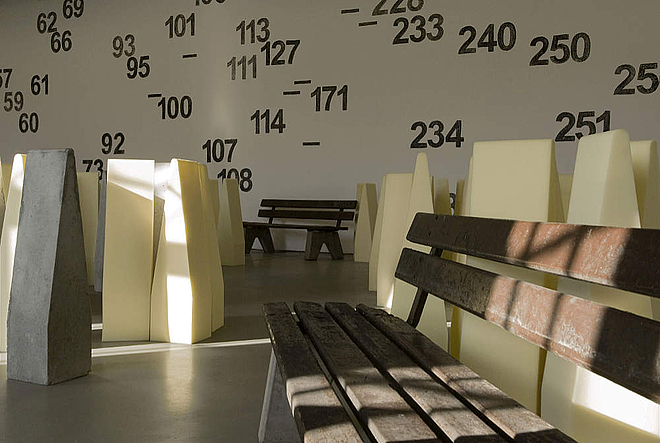 The Kunsthalle Fridericianum in Kassel is presenting the first solo exhibition in Germany of the work of the French-Moroccan artist Latifa Echakhch. Her title Les sanglots longs is the first line of "Chanson d’automne" by Paul Verlaine, probably the best-known French poem about autumn. On various substantive and formal levels, Latifa Echakhch’s exhibition reveals her interest in aspects of time and its ability to transpose historical events into the present and into new contexts. She thereby not only underscores time’s duration; her implementations in installations, drawings, poetry, and music are especially focused on the repetition and endlessness inherent in the course of time.

Latifa Echakhch’s mode of working combines a minimalist formal signature with politically charged content. In the first room on the lower floor of the Fridericianum, one can see many numerals drawn on the wall in charcoal; groups of hip-high wedges of foam rubber and concrete; and used park benches discarded by the city of Kassel. In the sense of Baudelairean synaesthesia, the retinal reception is expanded through the acoustic underpainting of a piano composition. But there is no direct access to an unambiguous content. The abstraction and ornamentics of the numerals and the pointed wedges contrast with the score and the park benches concretely taken from everyday life. Information provided about the exhibition states that the numerals are the numbers of the United Nations resolutions on the Israel-Palestine conflict from 1948 until today. In addition, the numerological sequence functions as the basis of a composition for piano on the model of Schönberg’s twelve-tone technique; the artist commissioned the piece especially for this exhibition. In analogy to future UN resolutions, the composition is to be continued; accordingly, it may find its conclusion only when a permanent solution to the conflict is achieved.

With or without knowledge of this partly political, partly musical background, one continues one’s tour through the benches and wedges, borne by a lovely and yet minimalist music. The foam rubber and especially the concrete wedges evoke additional associations; their arrangement is reminiscent of a desecrated cemetery (some of the wedges lie on the ground, while others lean against each other as if randomly), but also of tank traps, and, of course, minimalist sculptures. Drawing the numeral sequence on the wall with charcoal left traces of black dust on the floor – a symbol of ashes? Another reference to musical practice can be recognized in the materiality and form of the foam rubber wedges, which absorb and dampen sound. The first room, summarized in the title Chambre (2009), shows reservation in the statements it makes, but not in its effect, which invites the viewer to linger.

In an overall installation, Echakhch has achieved a formal density and substantive intensity that is even increased in the second room. Here, the political-historical allusions become more concrete, for example in the work Trotteuse (1999), which shows a second hand removed from the world of daily life. Dismantled and recontextualized by its presentation in the exhibition room, one of the things it stands for is the temporal constraints to which the lives of French workers were increasingly subjected in the course of the Industrial Revolution. It remains open whether the artist thereby wants to point out that the "pars minuta secunda" first ticked in 1585 in a clockwork assembled by Jost Bürgi of Toggenburg, Switzerland at the court of Landgrave Wilhelm IV in Kassel. The second historical reference is concealed in a loose collection of various 19th-century military utensils in the work Untitled (La Dégradation) from 2009, which alludes to the affair surrounding the Jewish French-army officer Alfred Dreyfus, who was falsely charged with treason and robbed of his rank. Occasional park benches, the numerals, and the sound of the music continue from the first into the second room and unite the whole exhibition into a large whole. Blue foil darkens the second room, thereby giving it even more intensity and intimacy than the first.

In her older works, as well, Echakhch removes the actual meaning from familiar objects of utility and culturally defined objects. For example, in the installation Fantasia (Empty Flag, Black) from 2007-2009, in which she mounted a large number of black flagpoles on the walls, like a labyrinth, whereby what is normally most important is lacking here: the flags themselves.

In her artistic grapplings, Latifa Echakhch makes no open criticism; hostilely interpreted, this might seem as if she takes no stance. Precisely in Germany, the Israel-Palestine conflict is probably more explosive than in other Western European countries. But in Les sanglots longs, the artist quite successfully manages to take this conflict, as well as the anti-Semitism of (French) historiography, as a theme and to turn them into art. 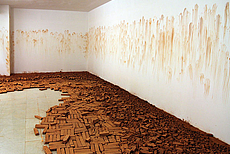