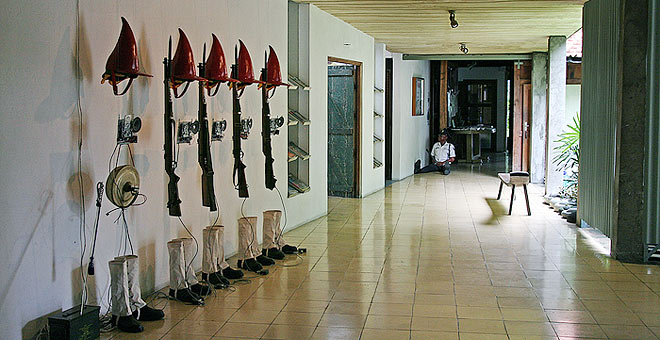 The cultural history of a nation, a community, is always a history of intersections, contestations, juxtapositions and negotiations between different beliefs and values. Syncretism then happened to be a strategy, even a system, in an attempt to reconcile, to manipulate, or to overcome disparate or contradictory beliefs; between the 'old' and the 'new', the 'genuine' and the 'alien', the 'traditional' and the 'modern'; between 'us' and 'the other'. Hence, beside as a defense mechanism, we could see syncretism also as a device to reconcile and to alleviate such binary oppositions. As a result, the world produced by syncretism is a 'collage'; a world filled with series of layers of beliefs and values; a plenitude of cultural crevasse. A phantasmagoria.

Java, due to its geographical position, has been a point of interface between continents and between oceans for a long time. Thus, its cultural history is a history of syncretism. Instead of opposing any incoming culture and religion, the Javanese were thought to have taken everything as necessary ingredients to form a new synthesis: a basic Javanese syncretism. This "system" then became the island's true folk tradition, the 'fuel' of its civilization. The "machine" of its culture.

If, as happened everywhere, the experience of mechanized labor and the shocks of urban modern existence cause life to be lived on a fragmented, superficial level, then the syncretism/phantasmagoria renders such superficial experience into a state of illusory plenitude. The illusory wholeness of phantasmagoria/syncretism covers the real state of both subjective and social fragmentation. While technological change produces an experience of shock, it also comes to provide a compensatory mechanism: phantasmagoria, which function as the dialectical other of the factory. The rise of technology increases the potential for phantasmagoric effects. Hence, we also could say, phantasmagoria is a fantasy world that function as a protective shield.

In Java's case, the form of such protective shield manifested in mythologies and fantasies that are being (re)produced from time to time. Mythologies and fantasies that try to elucidate and embrace the superficiality of everyday life. This mechanism comes, and therefore could be explained from, the Javanese concept and perception of time, which is not-linear: the past, present and future reside in the same space/place; a world of phantasmagoria consists of juxtaposition of ancient symbols and ghosts, superficiality of everyday-life, and fantasies of the future.

On the other hand, the issue here, like the magic lantern spectacle, from which it takes its name, phantasmagoria produces an illusion so convincing that a shadow becomes material body. As the illusive (and elusive) play of cultural symbols that serve, previously, to obscure the debasing effect of colonialism/capitalism, could phantasmagoria perform the same role in our contemporary world? Or, in a world flooded by digitalized and visualized information, would phantasmagoria only produce bewilderment effects?

As an installation, Java's Machine: Phantasmagoria, tries to approach the concept above by adopting the form/figure of a royal soldier, as can be found in Java's centre of excellence (Yogyakarta and Solo). We can see the form and practice of Java's royal soldier as a portrayal of how Javanese syncretism tries to merge divergent beliefs and cultures that come to Java. Since the middle of the 18th century, when the Dutch colonialization had already intervened in the cultural and political affairs of the Javanese kingdoms, Java's royal soldiers didn't have a military function any longer. Their existence only serves a symbolic prominence. As mentioned above, this practice should be seen as a strategy, as a defensive mechanism, to reconcile and negotiate contradictory beliefs and cultures. This can be seen in their costumes, that are in fact, collages of various cultures and traditions: Hindu, Islam, the West and local traditions. This is a new battlefield for Javanese soldiers, a war against the idea of homogenization.

Shown from Dec. 2008 to Jan. 2009 at Cemeti Art House in Yogyakarta, Indonesia, and previously, at the Yokohama Triennale 2008 in Japan.