Photo tour through the Biennale's exhibition Fluid Zone: Traffic & Mapping. Review and photos of the event. 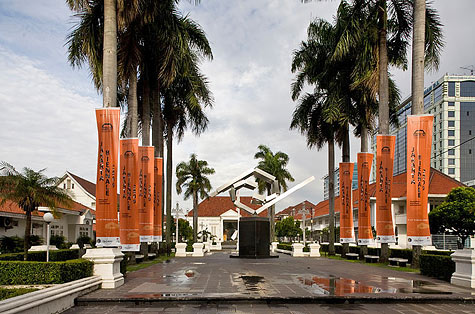 It all started with the fact that the organizer and the artistic team clearly grasp the reality of the city that they live in as an "Arena" in which many different contestations and negotiations constantly play out at the same time: public vs. private spaces, open and free spaces vs. commercial and institutionalized spaces, public mobility vs. poor transportation facilities and infrastructure – and almost everything in between.

As Ade Darmawan, the Program Director of the Biennial clearly stated: "When we were discussing the concept, what we had in mind was how we could make all our potentials relevant to the public… We conduct many interventions and collaborations by stepping into the public spaces of consumption, such as malls and streets; there we fight, seize a space, and strive for attention just as any product would do..."

As a way to structure the "Arena", the curators and artistic team identified three different zones: a Zone of Understanding, a Battle Zone, and Fluid Zones. Each zone comprised many different programs and activities. Some of them extended and crossed the narrow boundaries of the visual arts.

The Zone of Understanding was the warm-up phase for the whole Biennial set-up. It already started at the end of 2008 with the Theater Festival, Southeast Asian short films screenings at the Jakarta Film Festival, a photography show, the City Literary Festival, discussions, and workshops. The most interesting one was KOLAPS, a comic-drawing workshop with prisoners of the Tangerang Youth Detention Center and high school students.

And finally, the high point of the whole event: the Fluid Zones. Taking a conventional form of a biennial show as a reference point, this Zone can be considered a rather conventional one. But it was an outstanding one. Agung Hujatnikajenong, the curator of this section, brilliantly came up with the idea of having a selection of local and international artists with an appropriate, sufficiently strategic approach. Critically analyzing the map of local and regional contemporary art practices in the last few years, he made out a connecting element: all the local and international artists he considered including in his show had been intensely engaged artistically and creatively in "fluid zones", traveling, meeting, and working collaboratively in places other than their country of origin. More and more of these kinds of meetings are happening and shaping contemporary art practices throughout Southeast Asia, including Indonesia. With this simple mapping method — divided into two parts called "Mapping" and "Traffic" — Agung successfully brought together in one go the ideas of the locality, regionality, and globalization of contemporary art. So the international element of this Biennial was not artificially implanted to gain the label of international biennial, but was conceptually and cohesively embedded. The Fluid Zones section was staged in two venues: the Indonesian National Gallery and part of the lower level of the posh new Grand Indonesia shopping mall.

The selection and presentation of the works in the National Gallery was skillful, with a pleasing flow of divergent types of works representing the dynamism of the contemporary art practice of the young artists of Southeast Asia. Issues of identity, history, ethnicity, and nationality are clearly stated in Tintin Wulia’s (Indonesia) installation with hundreds of handmade passports, (Re)collection of Togetherness - stage 4 (2008). In his video installation The Four Malay Stories (2005), Ming Wong (Singapore) recreated scenes of old Malay movies to investigate from a distance — using foreign language, subtitles, and a nostalgic quality — the changes in the accepted morals in a certain period of time.

With all their theatrical elements, the works of Kuswidananto a.k.a Jompet (Indonesia) Java, The War of Ghosts (2008-2009) captured audience attention. The installation, with ghostly figures wearing the uniforms of the soldiers of the Javanese kingdom and loudly playing drums plugged into homemade electronic devices, testifies to how Javanese society, once occupied by a colonial power, has to negotiate and absorb modernity into its own cultural codes and norms. The result is a mixture of many different components fused together, a chaotic field of representations: the syncretistic dynamism of Javanese "pre- and post-modern" culture.

Some works in the Fluid Zones move away from the personal sphere and past history, dealing with the present, in which commerce and consumerism are the major driving force. Most of the art works presented in the Grand Indonesia shopping mall deal in some way with the issues of consumerism in urban life. This was underscored by selecting works that refer to things or products of urban daily life: a car, a motorbike, a guitar, toys, furniture, etc. Presenting all these works in a shopping mall to be admired by passersby can be seen as a juxtaposition of art and commercial luxury products. Whether intended as criticism of urban consumer desires or not, it was a daring move to confront Jakarta’s public with experimental art in such a setting.

What comes next after the success of this "Arena"? Since the Jakarta Biennial never receives enough public funding (if there is any at all) it will always have to struggle for its continuation. With the lack of infrastructure for art and cultural activities, it always has to negotiate with many different partners just to find a proper space and place where it can be adequately held. And finally, there is the primary institutional supporter of the Biennial: the Jakarta Art Council. The members of the Council work for only one term of three years, so it is certain that the next Biennial will be under the auspices of a new set of people in the Council. Will they regard the substantial achievements of this year’s Biennial, "Arena", as a starting point for an even better one?

All in all, "Arena" is a small attempt by some dedicated members of the art community of Jakarta (or, more widely, Indonesia) to serve the public with high-quality art and cultural events rarely seen and enjoyed for free. But the city is just so big, so monstrous with all its social, political, and cultural problems, that even "Arena" is probably too small to really send a direct and clear message to the policymakers in the government, the public at large, or even those within the local art scene who can play an important role in promoting and supporting art events such as this Biennial.

The message is very clear and simple: They own the Biennale. And that comes with an obligation to nurture it. Ultimately, a healthy and enriching cultural life is not some sort of exotic plant that grows by itself in a fertile tropical soil. Without proper cultivation, it could eventually die.

Nafas Art Magazine thanks Agung Hujatnikajenong, Maria Nadia, and Carla Bianpoen for their assistance in providing images and information.