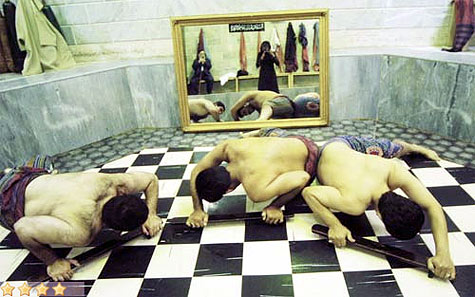 Exiled Iranian photographers like Shirin Neshat are well known in the international art world – they have experienced a downright boom in recent years. But there is little Western perception of those who have not left their country. In her new book, Rose Issa investigates this phenomenon and tries to do no less than to document the entire spectrum of contemporary Iranian photography.

"Iranian Photography Now" is an ambitious project. And so it has a few weaknesses. "Of course the selection of artists in the book is very personal and conveys an extremely incomplete picture," the curator and art critic Issa admits. "But someone had to make a start and show a cross-section through the various generations, aesthetics, and living situations of the photographers."

The result is a book that provides a good overview of the extremely varied artistic orientations of Iranian photographers at home and abroad. A book that conveys how the themes of these seemingly so different photographers often intersect. For example, in her series "Mother of Martyrs", the young photographer Newsha Tavakolian is as concerned with the war as are veterans like Abbas and Kaveh Golestan, who already photographically accompanied the first Gulf War.

Along with addressing clearly political themes, however, Issa also focuses on a cultural-political theme: censorship. "In my opinion, the West has quite distorted ideas of how people deal with censorship in Islamic countries," she says. "During the Islamic Revolution, for example, artists were anything but passive; they tried in the spunkiest ways to plumb the limits of what could be depicted. Censorship and repression merely encouraged most of them to experiment with new forms of expression."

It is hardly surprising that, with this stance, one of Issa’s favorite artists is the photographer Amirali Ghasemi. In a series titled "Party", the young artist addresses how societal taboos are overcome in our times. And in the exuberant scene of celebration that graces the cover of "Iranian Photography Now", he explores the contrast between the public sphere and private life. "Today, as well, the people in Iran have to submit to strict rules again," says Issa. "They have to submit to a schizophrenic dichotomy between a public and a private self." Ghasemi turns this necessity into art and covers the faces and hands of his drinking and smoking protagonists with white. He thereby not only protects their identities – he also invents a very specific aesthetic.

In a few places in Issa’s book, precisely the photographers’ differing aesthetics seem a bit arbitrarily thrown together. But ultimately the curator is interested in more than watertight concepts of content. "My interest is above all in making the West understand that the Middle East is part of this planet." That seems to have succeeded in this book.

Born in 1974, read Theatre Studies and Anthropology of Art at University College London. Lives in Berlin, Germany, as a journalist and translator.