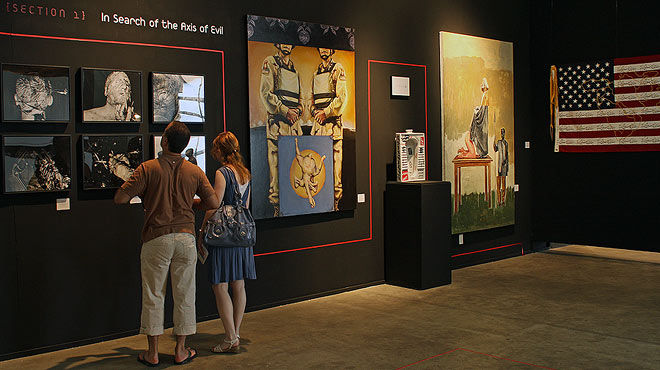 Iran Inside Out, on view at the Chelsea Art Museum from 26 June until 5 September 2009, features 35 artists living and working in Iran alongside 21 others living in the Diaspora. The result is a multifarious portrait of 56 contemporary Iranian artists challenging the conventional perceptions of Iran and Iranian art.

In Iran Inside Out, 210 works comprising painting, sculpture, photography, video and installation come together, in a rare moment which allows visitors an intimate look into the people, both inside and outside a country that is more complex than images of veiled women, worn out calligraphy and what a handful of other emblematic images would suggest.

Curated by Sam Bardaouil and Till Fellrath, Iran Inside Out is an examination of the means through which a young generation of artists is reconciling the daily implications of cultural and geographical distances with the search for individual artistic expression. The exhibition offers an unexpected insight into the artistic energy of a culture that is constantly evolving as Iranians living both in and out of the country, come of age living and working in contentious societies. While half of these artists such as Vahid Sharifian, Barbad Golshiri, Farideh Lashai and Jinoos Taghizadeh reside in Iran, the other half including artists such as Shirin Neshat, Shahram Entekhabi, Mitra Tabrizian and Shoja Azari has been interspersed in the Diaspora.

Iran Inside Out explores the process of deconstruction and reinvention of both, self and art that has resulted from this cultural schism, often swinging between openness and dialogue, or seclusion and separatism. Ironically, contrary to one’s expectations, the artists living abroad often draw more on their cultural heritage, while those on the inside focus more on issues of everyday life without much regard to what ‘the outside’ views as specifically Iranian references. Yet, within these disparities, one element stands strong: the recurrent references, sometimes ambiguous, at times emotional, often nostalgic and on occasion satirical and even tragic to Iran the country, Iran the past, the Iran which has been lost and that which could be found.

The exhibiton will be traveling to the Farjam Collection/Hafiz Foundation in Dubai in March 2010.

1. In Search of the Axis of Evil
On War and Politics
A satirical, comic and at times tragic exploration of the vilifying of a nation and its people by politicians and the Media
2. From Iran to Queeran and Everything in Between
On Gender and Sexuality
An intimate revealing of notions of Masculinity and Femininity within Iranian culture both, on the inside and the outside
3. The Culture Shop: Special Sale on Stereotypes - All Must Go!
On Culture as Commodity
A “supermarket-like” installation of works by various artists who comment on the redundant stereotypes associated with Iranian artists and art at large
4. Iran Recycled: From Vintage to Vogue
On Reinventing the Traditional Art Forms
A display of works by contemporary artists who are revisiting the traditional genres of miniature, arabesque and calligraphy and representing them in a revolutionary way in both media and content
5. Where in the World: City Quiz
On Street Culture within Tehran
A group of works by various artists is installed to create the impression of through a street in Tehran in an attempt to reflect on the city’s street culture

(From press information of the organizer)
23 image pages, more info

Iran Inside Out
Influences of Homeland and Diaspora on the Artistic Language of 56 Contemporary Iranian Artists
26 June - 5 Sept. 2009