Tensions and absurdities of an asynchronous development in times of mass urbanization. 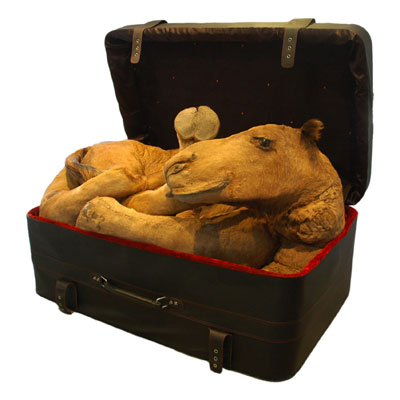 Merging installation, sculpture and photography, Huma Mulji gleefully manipulates both context and content and juxtaposes unlikely materials to create her own brand of situationist absurdity. Within this process, and underlying the humour and spectacle, are some acute observations on the social and economic realities of contemporary Pakistan.

Born in Karachi in 1970, Mulji now lives in Lahore where she has been Assistant Professor in the School of Visual Arts at the Beaconhouse National University since 2002. Before this she spent several years working with theatre design and this sensitivity to staging seems very evident in her work which can exude an almost slapstick theatricality.

‘High Rise’ on until June 20th at Elementa Gallery is Mulji’s first solo show in Dubai, however, this is not the first time her work has travelled to the UAE. Her installation, ‘Arabian Delights’, was one of the highlights of ‘Desperately Seeking Paradise’ at Art Dubai’s Pakistan Pavilion in March 2008. The work, which consisted of three customized suitcases, explored aspects of the economic migration and relationship between Pakistan and the Gulf states. The gold plated contents of one suitcase suggested the riches anticipated by migrants to the Gulf, while another held two standing showers with small speakers narrating both the dream and its corresponding reality. The third suitcase containing a taxidermied camel gained instant notoriety after an early complaint led to its removal from public show.

The stars of ‘High Rise’ are also taxidermied but this time they are a pair of water buffaloes and so perennial symbols of rural Asia rather than desertified Arabia. In Heavenly Heights one of them is situated precariously near the gallery ceiling having apparently climbed most of the way up a steel electricity pylon. Her Suburban Dream puts the other on its knees with its head protruding from an industrial concrete pipe which encases its absurdly elongated neck. The visual impact is both comic and grotesque.

These two sculptural works are accompanied by six photographs revealing the animals in other unlikely situations. Housing Scheme features four somewhat bemused buffaloes looking down from the roof of a large dilapidated housing block, while Pardesi Pride shows them surveying the steel skeleton of a new construction project. Another buffalo stands like a tourist between two white plaster horses that form a classic, kitschy roundabout sculpture with a half finished building as a backdrop. This scene is nicely inverted for In Black and White where the plaster horse appears equally out of place transposed to an empty field, while the buffalo looks curiously on. The remaining images also reclaim the rural setting but as pure visual fantasies which play with the idea of a vertical or ‘high rise’ urban existence within a horizontal rural space. These juxtapositions work in different ways, however, they all give a sense of parallel existences in which different elements move at different speeds but encroach upon and collide with others in bizarre and often disturbing situations.

Mulji’s practice began with conventional metal sculpture but an influx of new materials into the markets of Karachi in the late nineties shifted her focus to the actual process of sculpture ‘making’ from the diversity of what was available. With this change came an inevitable reflection on the globalised economies and changing tastes that these materials represented.

In 2004 she began working with photography and produced ‘Sirf Tum’. This photo series explored attitudes and issues related to public intimacy in a characteristically playful way by placing naked Ken and Barbie dolls in various incongruous locations and photographing them, often in the presence of seemingly incidental spectators. The attention to staging is obvious in this work as is the relationship created between installation and photography which is also so integral to ‘High Rise’.

Her work with taxidermy is actually very recent dating from 2008, and as well as camels and buffaloes she has used monkeys. In Salute (also included in the Elementa Show) motion sensors trigger the mechanised arm of the brightly dressed monkey to salute the passers-by. This is another potent symbol not only in Pakistan but also across other parts of Asia where performing monkeys are still a source of entertainment particularly in rural areas.

Mulji acknowledges that taxidermy is an inevitable attention grabber but she views it as just another in a progression of sculptural materials and one discovered by accident while drawing camels at Lahore zoo. It was there she met the resident taxidermist and concluded that the medium was exactly what was needed for the work to tell this dark but absurd and surreal story.

So although it is usually wise that artists also subscribe to the old Hollywood advice ‘never work with animals or children’, the taxidermied players in this particular show are absorbing exceptions. The buffaloes’ strange and comedic predicament entertains but also creates a space for reflection on the complexities of the relationship between the rural and the urban in rapidly developing environments. As such ‘High Rise’ goes beyond Pakistan’s national boundaries. An exploration of these tensions, absurdities and unintended consequences can be equally applied to any nation in a transitional phase of mass urbanization. The work raises a pertinent question not only about the pace but also about the type of change and how economic time and space do not necessarily move in synch. It will be fascinating to watch how Mulji’s singular viewpoint continues to reflects aspects of a nation likely to be among those watched most closely over the next few years.