Beyond The Clichés. Review of the exhibition of contemporary art from Pakistan, Asia Society, NY. 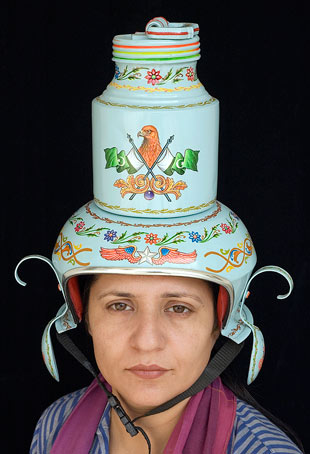 Pakistan's relationship to the West is unique if one considers its technological advancements (including nuclear capabilities), its influential and cosmopolitan middle class (crucial in overturning Musharraf's regime) and a substantial presence of what are considered the western world's worst enemies (various fundamentalist groups, including Al-Qaeda and the Pakistani Taliban or TTP). Political, economic and social pressures weigh heavily on its relatively young national life, which emerged in 1947 through a process of decolonisation and the dramatic partitioning of India. Indeed, its geopolitical position and the tectonic shifts transforming Central and South Asia cannot be underestimated.

In such fertile ground it is not surprising to discover that the seedlings of creativity have not only taken root, but have confidently extended their aesthetic branches to other parts of the world. Not genuflecting to the West, this "majority world" nation is demonstrating its confident and ready stance in an assortment of creative possibilities and its very real commitment to the 'craft' of image making.

New York's "Hanging Fire" exhibition presented by the Asia Society and curated by acclaimed scholar Salima Hashmi is an important and ambitious raising of the curtain on what is an entire cabaret of Pakistani artists, both established and emerging, that are making their way onto the international stage. Artists investigating the fracturing of traditions and ideologies, as well and the spectre of terror; artists who personally and creatively must contend with an influential past and an especially uncertain future. Showcasing fifteen leading artists - Zahoor ul Akhlaq, Imran Qureshi, Anwar Saeed, Rashid Rana, Naiza Khan, Huma Mulji, Hamra Abbas, Bani Abidi, Asma Mundrawala, Ayaz Jhokio, Ali Raza, Mahreen Zuberi, Adeela Suleman, Arif Mahmood and Faiza Butt - this prestigious exhibition gives viewers a taste of Pakistan's rich expressive potential. All these artists have drawn on issues which move and shake them daily. Their responses - often subtle, humorous, theatrical - can be described as a kind of defence mechanism from within a politically and culturally charged creative space.

Pakistan's contemporary visual culture, even from a technical perspective, implies a slow and reflective process. In this sense, it is quite different to the fast and often neurotic flashes seen in other contemporary art practices. Its relationship to artistic traditions, which in Mogul times produced renowned ceramics, textiles and miniatures - has inspired an entire school of art, represented here by Imran Qureshi and Mahreen Zuberi. In fact, this New York show is the first in the United States to highlight the broad range of media in use, following Honolulu's Academy of Arts show in 2005 show - "A Thousand and One Days" - which focused solely on women miniature painters.

Excellent schools, such as Lahore's National College of Arts and Beaconhouse National University, and Karachi's Indus Valley School of Art & Architecture; accomplished mentors and teachers, such Salima Hashmi, Quddus Mirza and many of these artists; dynamic cooperatives, such as VASL (part of the Triangle Arts Trust Network); and knowledgeable collectors, such as Khurram Kasim, are ensuring the vitality of this dynamic and developing art scene.

Walking the streets of Karachi and Lahore and staying in the homes of artists, you realize that there is so much more to the misery and gore projected by the media. 'Hanging their own fire', these artists represent the spirit of a resilient population that is attempting to release the negative and imbibe the positive; to see but not see and hear but not hear. Images such as Arif Mahmood's 'Young and the Fearless' and Ali Raza's 'No Two Burns Are the Same' transform the usual chaos into poignantly reflective critiques. Adeela Suleman's decorated helmets contain playful allusions to the notion of attack and defence, finding simple functions in complex forms. Faiza Butt's 'Get Out of My Dreams' and Naiza Khan's 'Iron Clouds', explore the ideas of invasion and withdrawal, protection and confinement.

This is not simply a case of reproducing the world. Nor is a denunciation of history's relentless horrors. It is a fresh chance to recognise, as Italo Calvino asserts in 'The Invisible Cities', that paradoxically "in the midst of hell, is not hell". To revive what is spent or rejected and celebrate the poetics of reinvention in a setting where everything is lined up against the artist is not only a strategy of survival, but a personal affirmation that art is necessary as a lifeline and refuge. Art, as Salima Hashmi describes, as an "opportunity for dialogue, negotiated rebellion and mutinous thought."

Rashid Rana's "Red Carpet", hangs as a powerful metaphor for the multilayered perspectives and contradictions at work in a country like Pakistan. Not only is the old juxtaposed with the new in terms of imagery and technique, but tradition (rugs) and history (slaughter) are cleverly interwoven into the fabric of visual and personal experience, which is channelled intuitively through the artist's eye. Inverting the visual mechanism of Rana's work (beauty and order from a distance, horror and displacement at close range), I can only conclude that the ugliest reductionist impressions of Pakistan viewed from afar, reveal instead, in its cities and galleries, an intricately complex society whose best contemporary art captures the finest of visual subtleties.

Independent writer and curator, with a focus on Asian contemporary art. She is the Asia-Pacific Publications and Projects Consultant for Skira International Publishing in Milan.