Interview about God Grows on Trees, with 99 children portraits from Madrassahs in Pakistan. 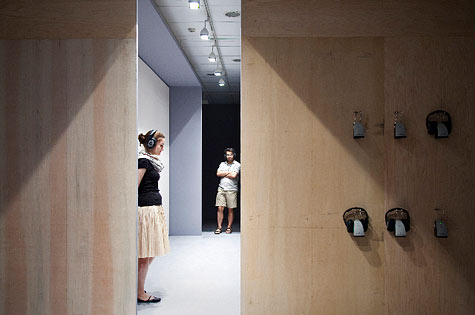 Sharmini Pereira: I'm particularly drawn to the ways in which you have explored the role of religion in Pakistan. It's a subject that seems to attract so much attention and yet remains so misunderstood. In works like Read, God Grows on Trees or In this is a sign for those who reflect one gets a strong sense of your own frustration with this situation. Yet what comes across in all these works is a feeling of deep observation that must have placed you in a very different space in your practice as an artist.

Hamra Abbas: I would not use the word frustration, I think these works are coming more out of observation that you mention. Read is a maze, a query; God Grows on Trees: a contemplation; and In this is a sign for those who reflect: a reflection. I do not think of myself as an authority, nor informed enough, to comment on matters of religion. In my work, I don't make value judgments. However I do share a close existential relationship with Islam and all the complexities that that entails. So it is at that level and in that context that I am able to engage and empathize with matters of belief. On the other hand, I strongly criticize the role of 'the informer' who after a fleeting encounter with the Muslim world indulges in blatant exhibitionism. Unfortunately, such Orientalist inspired modes still persist today and are a major cause not only of the distortion of religion but also of friction. The importance and centrality of religion in terms of the turbulence and uncertainty associated with it today affects me deeply. As you accurately say, it is a subject that attracts so much attention and yet remains so misunderstood.

SP: Can you describe how this relationship with faith prompted you to make work?

HA: On my return to Pakistan, after four years in Berlin, I visited various sites of religious significance usually accompanying my partner - an academic - studying religion and belonging to a Sufi lineage. Amongst the three works inspired by my encounter with such spaces, God Grows on Trees affected me the most. I went to many different madrassahs, documenting young students, both girls and boys. For me here were a whole lot of chirpy and chatty kids, memorizing their sabaq (lessons), and that is what I wanted to paint. In the end, I was taken utterly by surprise at how emotionally attached I had gotten to these little faces, through their portraits that had surrounded me for almost an entire year. Leaving the work behind in Berlin after the opening of my exhibition, felt almost like abandoning these children. I felt for this piece something that I had never experienced before.

SP: The experience sounds like it exerted a powerful influence in ways that you least expected. Had you not spent as long as you did with the children or not had the access you were granted, I imagine the work would not exist as it does, which is probably why you feel it touched a side of you in a manner that making other works has not. But I could be wrong. Up until quite recently I used to think that being an 'onlooker' was one of the most interesting positions from which to create artwork or write etc. While I still hold this to be true I've also given a lot of thought to the difference that exists between being an onlooker and a witness. I have found myself wondering if being a witness beckons a response to share what is seen, in a manner that acknowledges the subject and the audience, to the extent that the witness is forced to examine their conscious and not their will to exert their opinion, in the way that an 'informer' might do. When I first looked at God Grows on Trees, which was in fact while you were still painting the portraits of the children, I recall thinking how extraordinary the images were. Not because of their exquisite draftsmanship but for fact that they were the nearest many of us would come to seeing what you had witnessed. But the view of a witness is still subjective, which leads me to ask where you divide the line between fact and fiction in your work in general?

HA: The role of power is important in the process of manufacturing facts, but fiction is also a way of expressing 'reality' that challenges us to see things differently. I am fascinated to see how the tradition of story telling and myth has such a hold over human imagination, perhaps because they speak about the facts of the human condition. But to answer your question lets go back to God Grows on Trees - as soon as I entered the section of the madrassah for young students I found myself snapping away portraits with my camera. Simply because their faces fascinated me as children's faces often do, which I think is fairly universal, but also because as an artist I do carry with me the pseudo role-playing of being a 'witness'. Later, in my studio I would flip through these shots over and over for a long time. And always I found these faces and these children so complete and content in their own being. In documenting them I felt I could not dare add my own two bits of clearly insufficient knowledge, to a very old and vital tradition of learning. And this led me to start painting the portraits, reproducing their faces as faithfully as I could, almost as a documentation. I just painted versions of portraits till I came to the point where I decided to stick to one style that I carried till the end. As an artist, I see the world's current fascination with the madrassah as similar to the Orientalist painters' fascination with the harem in the 19th and early 20th Century, which is needless to say, quite reduced and sensationalised. And my determination to work in this manner was a response to this sensationalism.

SP: What role does the digital print play in this work?

HA: I added the digital-print to the work at a much later stage, and this in fact gave the work its title, God Grows on Trees. It is an image of trees that are along a road in Lahore, and nailed with metal plates printed with the various names or attributes of God. I clearly remember reading them as a child, in the backseat of the car, on my way to school. The digital-print in this case works as a teaser, connected most obviously to the paintings with the number 99. I have always found it ironic that in modern capitalism, with its worship of mammon, 99 is equally ubiquitous as the psychologically critical pricing point found on price tags, posters, and TV advertisements.

Curator, publisher and director of Raking Leaves. Based in London, UK.

For these two artworks, Hamra Abbas has been awarded the Jury prize at the 9th Sharjah Biennial, 2009.