Reading (and Curating) from Right to Left

About the urgency to engage with difference as an on-going process. 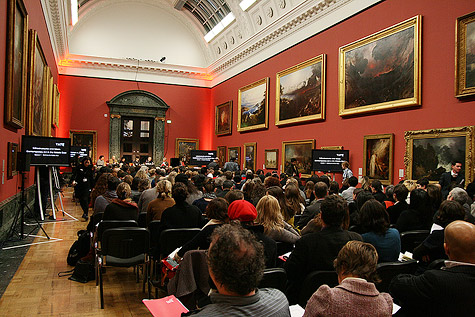 Is the balance of power – political, economic and cultural – moving to another place? Are we witnessing what cultural theorist Stuart Hall would call the ending of one conjuncture and the beginning of another? All the signs seem to be pointing that way. The proliferation of biennials across the globe from Istanbul to Guangzhou, from Sharjah to Singapore, and the development of new museums emerging across the southern hemisphere of the globe suggests that we are witnessing the disintegration of cultural hegemony in one part of the world as it cedes its influence to other parts of the world that are beginning to take the lead in defining the parameters of cultural-economic-political space. If this really is the end of one conjuncture and the beginning of another (and it might be too early to say), then this will not be a clean break. We would be foolish to anticipate the categorical end of western modernist values, punctuated by a full stop, only to announce the fresh articulation of a new set of unconnected values, meanings and agendas from the Middle East, China, India, Brazil and elsewhere. The present remains doggedly connected to the past and the so-called ‘developing’ world remains irrevocably linked to the ‘developed’ world through shared histories and narratives. Perhaps all we can safely say at this particular moment in time is that the northern hemisphere (mainly Europe and North America) senses that its authority and its artistic and intellectual capital is less secure than it once was, its footing on the mountain-side that roped Picasso and Braque together ‘like mountaineers’ in the early years of European modernism decidedly less secure.

There is a tendency for us to see exhibitions and artworks as though they were free-floating structures removed from everything else around them but of course exhibitions and artworks are constructions, fabricated from the ideas, materials and experiences derived from the world in which they circulate. There is no such thing as a blank canvas or a pure space, unpolluted by the flotsam and jetsam of history and politics. We all start in a crowded room, full of other peoples’ expectations and ideas, informed by the present and the past simultaneously. Take, for example, the category of ‘contemporary art from the Middle East’ (or, indeed, contemporary art from India or China). The very notion of the ‘Middle East’ is a proposition that inevitably brings with it a weight of expectations and assumptions that, as the geographer Derek Gregory has so eloquently mapped out, has its roots in the geo-political dynamics of power and representation that go back at least to Napoleon’s invasion of Egypt in 1798. The ‘Middle East’ – itself a colonial and military construction which persists dynamically into the present – and its representation(s) are hotly contested.

There are many who wish to see art and artistic production liberated from the weight of its political context and freed from the shackles of the literal, the documentary and the descriptive. Is this not the optimism of romantic longing winning over the pessimism of lived experience? Even the most abstract and poetic artworks derive from somewhere, from a particular time and a particular place. They are shaped by that historical and geographical conjuncture just as they contribute to its formation. This is not to deny the potential of artworks to speak to other cultures, places and times. It is merely to insist on the overlapping terrain of culture and geography and of the influence of real and imagined maps in the way that we see and curate the world.

Of course, artists and curators have the right to expect that their work should sit within the wider context of contemporary art and ideas without being pinned down and fixed like a military satellite picture within a relentless narrative of conflict, violence and religious extremism that in many ways distorts the everyday reality of peoples’ lives. Power and representation remain inextricably linked, perhaps more so in the Arab world than anywhere else at this present historical conjuncture. How then is it possible to ‘see’ and ‘read’ the artistic production of that region as free-floating images? Even before the artwork has left the artist’s studio in Amman, Cairo, Tehran, Beirut, Ramallah, Algiers, it is caught within a frame of representation which has been painstakingly fabricated over centuries. There is inevitably room for mis-understandings and mis-readings. We have a tendency to assume that we all start from the same place and yet English is read from left to right and Arabic from right to left. Our starting points (and hence our bearings) can often be diametrically different, opening up the possibility of multiple misreading, mis-translations and misunderstandings. We end up with more questions than answers.

How can the questions left hanging and unresolved be answered? How can a deeper, more complex series of conversations be initiated, framed, proposed? But before we go there, perhaps it is necessary first to articulate the discomforts and disturbances and give them a name. Everyone will have their own moments of awkwardness and uneasiness but here are some of mine: the lack of fluency in a foreign language which undermines one’s sense of authority and others’ perception of it; the fact of difference expressed in the variegated articulations which belie the idea of a homogenous, undifferentiated contemporary art world; the impossibility of generalising about the physical conditions of such dramatically different cities, countries, economies, cultures under a single rubric and yet the points of continuity and connection shaped by their historical (and colonial) formation; the desire to talk about art and ideas and yet knowing that whenever we do we will be tripped up by the politics of representation; suppressing the image and bringing the politics of power and representation to the fore, after all they are always there like silent mandarins shaping and influencing the outcomes of our exchange even if we do not want to acknowledge them; suppressing the politics and pretending that artists and intellectuals from the so-called ‘developing’ world occupy a level, playing field with their European and American counterparts and that context (and politics) is irrelevant; privileging the visual and creating a shopping list of ‘hot’ artists and curators and artistic projects which will be snapped up as part of a global shopping expedition which acquires artworks without the more burdensome and demanding requirement to re-think the intellectual and conceptual paradigm of an institution or collection.

The fact of difference, like the experience of an unfamiliar and challenging artwork, compels us to occupy a space which is uncomfortable, awkward, disturbing and incommensurate, on many levels, with our perception of the world. Do we have any option but to try to negotiate difference – not by assimilating it or by neutralising it or by exoticising it – but by engaging with difference as an on-going process which acquires depth and complexity, yet is never the same? If this historical moment does indeed turn out to be the end of one conjuncture and the beginning of another, then we need to come to terms with the implications of this shift and re-orientate our bearings. Where once we read (and curated) from left to right, perhaps we now need to start reading from right to left?

Curator and writer. She was founding director of the Institute of International Visual Arts (inIVA), London. Born in Cairo, Egypt, lives in Great Britain since 1970.

This article is a response to themes discussed at ‘Contemporary Art in the Middle East: A Two Day Conference at Tate Britain and Tate Modern’, held on 22-23 January 2009, and was first published in Printed Project, no.11 (‘Farewell to Post-Colonialism – Querying the Guangzhou Triennial 2008’), edited by Sarat Maharaj and Dorothee Albrecht.