Eko Nugroho: A Wrap of Heart in Freezer 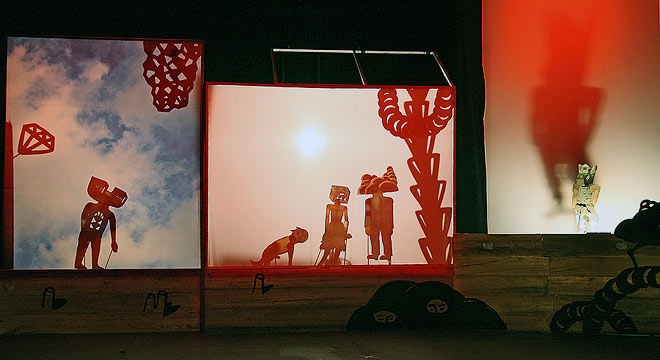 Most Javanese children, especially those born before the mid-1980s, grew up in familiarity with the traditional Indonesian Wayang Kulit (shadow puppet theater) and the stories associated with it. The performances were a part of traditional gatherings and were staged at some family and social occasions, for example weddings, birthdays, and inaugurations to public office. Not only the stories and aesthetic aspects of the performances are important, but also the entire event, which creates a feeling of togetherness. That is why efforts to revise and modernize this traditional form of performance are one way of retracing the longing for the (hi)story of the past.

Eko Nugroho was a common Javanese boy with memories of such shadow puppet performances. He grew up in a village that still maintained traditional collective life with an atmosphere in which people live with their cultural heritage. Through comic books and radio, Eko worked to develop a close relation to shadow puppet figures; in the Indonesian context, these are generally figures from the Mahabharata and the Ramayana, the two Indian national epics spread throughout Indonesia by Hinduism in ancient times. In the same period when he watched "the past", Eko also enjoyed exposure to Western culture, watching cartoons on television, reading comic books, listening to pop music, and going to the movies. So he felt equally at home with tradition and modernity and with the "East" and the "West". As a young boy, Eko absorbed everything offered to him as culture, and gradually it led to his unique personal perspective on the world.

This unique perspective is related to his credo that art is a way to communicate ideas to the public. That is why he combines stories of daily life in his surroundings with the visual imagery of popular culture. Eko plays flexibly with his medium. He explores two-dimensional work - drawings on paper, canvas, and embroidery - and also creates three-dimensional works and animation. Eko always wants to talk to people, in indirect ways to extend the borders of their imagination. His desire to reach an audience broader than the visual art scene and to journey through his childhood memories led him to retrace a history of the traditional shadow puppets ritual.

"Bungkusan Hati di Dalam Kulkas" (A Wrap of Heart in Freezer) is a collaborative performance work based on Eko’s comic figures. The main goal of the project is to create a contemporary shadow puppet performance, not only reproducing the form, but also and particularly capturing the spirit of today’s society. Taking contemporary visual images as a basis, as Eko has, is the best strategy in approaching contemporary sensibilities. The project involved a young dalang (master puppeteer), Ki Catur Kuncoro, with his great skill in traditional performing arts; Joned Suryatmoko, a scriptwriter with a realistic approach; Andy Seno Aji, a stage designer accustomed to working with a contemporary theater group; Ignatius Sugiarto, a lighting designer; and Yenu Ariendra, a composer who works mostly with digital equipment. As a starting point, each member of the group read Eko’s comics, tried to capture the idea of their strange figures and how his recent works focus on violence as a result of in-depth observation of what how the society has developed.

As customary in the shadow theater, the puppets are made of leather. But while traditional puppets have decorative patterns colored on both sides, and therefore cast a dark shadow, in order to make a colorful shadow, Eko decided to paint one side only, so that the figures are translucent. Shadow in itself is a basic metaphor for the universe when older Javanese people speak of their faith and belief. That is why all the characters and properties always had a hidden meaning to be interpreted by local wisdom. By keeping the form a shadow, the players refer to a difference from or something behind "the real".

For the dalang or master of the puppet theater, as a traditional cultural activist, it is a new experience to enter a world of visual imagery that implies a chaotic and deconstructive interpretation of the universe. Working with performing art people with a traditional background led Eko himself to a better understanding of the foundations of local wisdom, particularly in Javanese society. The writer of the play should also discuss many possibilities of staging a story, remembering that the puppets can display only gesture and text, unlike actors who always have their own voice and expression. The biggest challenge is to transform the convention found in traditional wayang performance to give it a contemporary sensibility, and thus to perform a play with fresh and progressive audio-visual imagery.

The story told by the performance is about domestic violence and how it is influenced by events in the wider world. There are issues of the private and the public, male and female, individuality and communality, and so on. It is about family tragedy, when violence is seen as the way to solve the problem: a couple faces crisis in their marriage because the wife had an affair with a man, a situation complicated by his transgender son. After many conflicts, the jealous husband kills his wife; and in the end all the characters die. The story is told in Bahasa Indonesia (Indonesia’s official language), also a new aspect of the performance, since most shadow puppet shows tell their stories in the Javanese language. Using contemporary music is an important element of the performance, and in some parts of the show, the master puppeteer’s approach to telling the story is reminiscent of hip-hop songs.

Curator, researcher, and writer, with special interest in cultural studies. Based in Yogyakarta, Indonesia.

(Copy edited by Mitch Cohen based on the edited German version.)