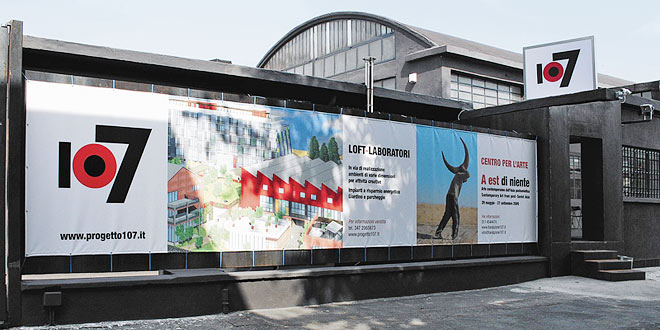 As the inaugural event in its newly opened space, Fondazione 107 in Turin, Italy, presents the extensive exhibition East of Nowhere: Contemporary Art from post-Soviet Central Asia. Located at via Sansovino 234, this private foundation has established its own Centre for Art in a 1,500 m2 former industrial complex, near Turin’s Stadio delle Alpi, to provide multidisciplinary work spaces designed for both local and international artists and events.

Federico Piccari, president of Fondazione 107 and a practising artist, explains: "This exhibition is part of our cultural program, which is focused on creating a practical synergy between contemporary art and industry. With this inaugural event we begin our ongoing commitment to promote artistic initiatives in an open and actively evolving context, linking Turin’s dynamic cultural setting with other creative and multicultural realities. Our collection of Central Asian artwork is among the best available from this region and provides an exciting backdrop for our future role within the international art scene".

East of Nowhere showcases the work of 32 artists from the ex-Soviet republics Kazakhstan, Kyrgyzstan, Uzbekistan, Tajikistan, as well as from Afghanistan and Mongolia. Formerly incorporated into the Soviet monolith, the reconfiguration of this 'Greater Central Asia' is one of the most significant political and cultural events of our time. This region is rapidly transforming entire economies (oil, gas and other natural resources) and geopolitics (various conflicts and strategic alliances) not just in terms of continental Asia. Recent events recall the 19th century dynamics of the 'Great Game', made famous by Rudyard Kipling in his colourful novel Kim (1901) and have revived the legend of the old Silk Road.

Curated by Enrico Mascelloni, Valeria Ibraeva, and Rosa Maria Falvo, in collaboration with Federico Piccari, the show provides a fresh perspective on the immediate concerns of Central Asian artists, both young and old. Their collective efforts offer ironic and provocative responses to the inadequacies of political frameworks, the realities of scarcity and constraint, and the reinvention of tradition and spiritual perspectives.

There are over 100 artworks on display, including internationally recognised Kazakh artists, such as Said Atabekov, Almagul Menlibayeva, Yerbossyn Menlibekov, and Oksana Shatalova, alongside emerging artists yet to be seen in the West. In homage to Rustam Khalfin, patriarch of the Central Asian avant-garde, this selection covers a vast array of styles and mediums, including the enormous objet trouvé assemblages of veteran Kazakh sculptor Georgy Tryakin-Bukharov, new videos by Afghan artist and teacher Rahraw Omarzad, and several photographic works, including the historic images of Mongolian artist Dugarsham Tserennadmid, created prior to 1995 when she returned to a nomadic life on the steppe. It also features large paintings by Kazakh artist Moldakul Narymbetov and Kyrgyz artist Talant Ogobaev, as well as the refined miniature works of Afghan artist Khadim Ali.

Co-curator, Rosa Maria Falvo says: "Here the ‘journey’ is not just a metaphor for the interchange of cultures, it becomes the very context of creativity itself. Images as distinct as Rahraw Omarzad’s shrouded Afghan female faces, whose stares declare the heroic silence of personal expression; Davaa Dorjderem’s maternal Mongolian maidens choreographed in tranquil swan-like poses; Georgy Tryakin-Bukharov’s improvised Kazakh ‘piglets’, outsized in life and association with a menacing bureaucratic ‘wolf’, not only speak of conventions and aspirations from within their country, society and culture, but go beyond to show the multifaceted conditions of ‘Central Asian’ contemporary life. Instead of artists thinking of something new to say, we see the juxtaposition of new opportunities to say what they have not been able to say until recently. This kind of soul searching is by definition fresh and defiant; less within a common philosophy, goal or experience and more like an integral part of an ancient Greek chorus commenting on the contemporary drama.”

The 320 page exhibition catalogue, published by Editions 107 in Italian, English, and Russian, includes 3 curatorial essays, a contributory text by art critic Gamal Bokonbaev, artists' portraits and biographies, a chronology of the most significant events in Central Asian art, and full colour reproductions of all the artworks on display.

Special thanks to Federico Piccari, President of Fondazione 107, and Rosa Maria Falvo, co-curator of the exhibition, for providing the information, text and images.