Review of the 8th African Biennial of Photography in Mali. Including a selection of 32 photos. 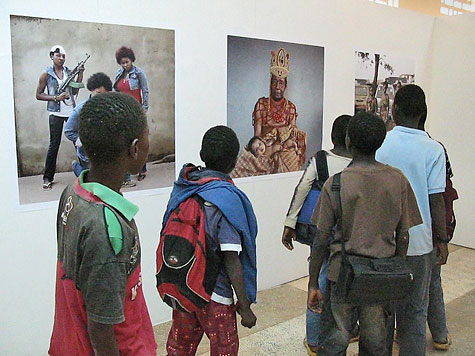 The 8th African Biennial of Photography ended its month-long run in Bamako on 7 December. The Biennial, which is also called the Recontres de Bamako or Bamako Encounters, is a meeting point for African photographers, photographers working on the continent and the professionals – editors, publishers, curators - they collaborate with.

The big hope of the organisers this time around was that, after almost 15 years of existence, 2009 would mark the real coming of age of the event as a major date on the calendar for all those working in photography in Africa. There was certainly a buzz in the air this year and the Délégué Général of the Biennial, Samuel Sidibé, feels that the organisation has taken a big step forward. "The Biennial is one of the only places for African photography on the international scene. African photographers don't have a scene in Europe. They don't have a scene in the US. This is the only way they can be seen and promoted."

The Biennial brought together more than 50 photographers and a handful of video artists in the official shows, with as many as 50 more photographers exhibiting their work in fringe shows set up across the city. This year the Biennial took place in just three main venues: the National Museum, the Palace of Culture and the District Museum. The organisers felt that, in the past, the event has been spread over too many locations. Another innovation this time around was including a show dedicated to Malian contemporary photographers.

This year's theme was Borders, and although many works predictably dealt with the attempts of Africans to migrate to Europe, there were plenty of other takes on the theme as well. The set of photographs that won the main prize at the Biennial, the Seydou Keïta prize, for example, looked at borders in the Nigerian city of Lagos. The series of 6 medium-size colour photographs is called Under Bridge Life. They are all taken from a single spot under a bridge. The bridge has a gap in the middle of it and through this gap shines a shaft of light. The subjects of the photographs either pose in or move through this light. The photographer, 37-year-old Nigerian, Uche Okpa-Iroha, says they show the divide between rich and poor in the city. "These people live under the bridge, but they dream of living in another part of the city. They are just trying to negotiate their space, to make something out of it, do business, make a living and live like any other Nigerian."

The biennial takes in many different forms of photography. There is classic reportage for example with the work of Alain Wandimoyi from Democratic Republic of Congo. His series of 5 small colour photos show the everyday lives of those displaced by fighting in the Kivu region of the country.

For more abstract work one could look at World Mosaic by Saïdou Dicko of Burkina Faso. Dicko has arranged a couple of hundred very small format photographs in a grid pattern. The photo are mainly of the shadows of people or animals or spots of paint that look like people.

A set of photos that made a big impact at the Recontres was the series Nollywood by South African Pieter Hugo. These large format colour photographs deal with themes recurrent in the Nigerian film industry. Many of these posed portraits shocked viewers as looked at themes in horror movies. The gruesome make-up jobs are particularly disturbing.

For young photographers, the Biennial presented an opportunity for their work to be seen and for them to meet and discuss with colleagues in the industry. Aboubacar Traoré, a Malian photographer whose work was included in the main group show, says the experience was important for his professional development. "I learnt a lot during the Biennial. I looked the work done by my fellow artists and that really inspired me. The quality of the photographs in general was very, very good."

One of the main criticisms of the Recontres was that the organisers did not do enough to reach out to the population of Bamako. There were some attempts to put up large format posters around the city, but this faced problems both getting the photos to Bamako on time and then some opposition from local authorities. Mr Sidibé, from the organising committee, says this is something they are going to work on next time around. "We tried to put a lot of photographs in the street. Unfortunately we didn't really succeed because we had some problems with some officials who didn't want this to happen. I think for the next biennial we really have to think about this. Because people aren't coming to the museum, we have to take the photographs to them."