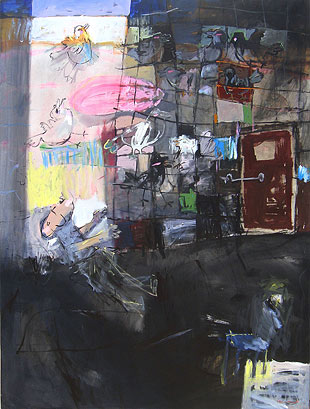 In a region where there is a race to invest in art and culture, Bahrain’s Ministry of Culture and Information is to spend more than $100 million in a bid to position itself as the cultural capital of the Gulf, highlighting the country’s longstanding heritage as the backbone to help drive this vision forward.

Although the competition comes from deep-pocketed neighbors, the Ministry has conceived an ambitious cultural agenda aiming at developing new institutional infrastructures by building museums for archaeological sites, its first Museum for Modern Art and a National Theatre - the only structure to be under construction so far from the list.

At present the country holds several governmental cultural institutions. The National Museum, inaugurated in 1988, houses a permanent contemporary art collection of Bahraini masters. The Bahrain Fort Museum built on the Portuguese Fort archeological site opened last year. The Art Center inaugurated in 1992 mainly hosts activities by the Bahrain Arts Society, a nonprofit cultural organization established in 1983 by Sheikh Rashid Bin Khalifa Al Khalifa with the objective of participating in promoting culture and developing the fine arts in Bahrain. Next to it stands the Cultural Hall serving as a multipurpose auditorium, which was inaugurated in 2004. Beit Al Qur’an - opened in 1990 - holds one of the most comprehensive collections of Qur'anic manuscripts in the world and recently hosted the traveling photographic exhibition "My Father’s House", organized by the British Council. Other cultural spaces, such as the newly opened Bin Matar House, are also actively taking part in the promotion of Bahraini art and heritage. It is one of the latest in a series of projects focusing on the restoration of traditional houses of established Bahraini families. The project was initiated by the Sheikh Ebrahim Bin Mohamed Al Khalifa Center for Culture and Research, which was founded by Sheikha Mai Bint Mohammed Al Khalifa, the current Minister of Culture and Information.

There is an apparent desire from the Ministry to create yearly cultural events for local and international audiences. The Spring of Culture is an event organized for the 4th year, with a program focused on art and music. The Bahrain Summer was produced this year for the first time to continue cultural activities throughout the hot summer days. The Annual Bahrain Art Exhibition, running for the past 35 years, has been "the pride of Bahrain". It showcases artists mainly belonging to the Bahrain Arts Society, though the presence of young media artists is increasing year by year in an attempt to create a fresher and a more critical approach to this well-established show.

Another prestigious exhibition that took place at Moda Mall earlier this year is "Um Kulthum - The Fourth Pyramid". It was organized by the Shaikh Ebrahim Bin Mohammed Al-Khalifa Center in collaboration with the Institut du Monde Arabe in Paris (IMA). This traveling exhibition, previously shown at the IMA in 2008, is an impressively diverse exhibition showcasing a mix of multimedia sequences on the achievements of this unique Arab icon with some of her favorite personal belongings, as well as works developed by local and international contemporary artists inspired by the diva. Bahrain is the first country from the Gulf to host this show, marking a longstanding relationship with the IMA, which is now hosting a Bahraini exhibition on pearl diving in Paris.

While the Ministry has been busy conceiving mega-structures, small and medium-sized independent groups and spaces have been growing in number in the last four years, such as the Elham Group. This collective is composed of artists and writers, operating as a space-less art organization that provides a platform for the expression of new and emerging creative talents by organizing monthly cultural gatherings in various locations throughout Bahrain’s capital. The latest and most challenging event organized by the group took place in May of this year; the Elham Art Festival, hosted at the Bahrain Fort Museum, the Cultural Hall and the National Museum, brought together poetry, music, film and art with the objective of promoting cultural dialogue and the artistic expression of young talents.

Among the grassroots initiatives, Al Riwaq Gallery (ARG) - founded by Iraqi art patron Bayan Al Barak Kanoo - is notable for its support of contemporary art practice in Bahrain. The gallery opened in 1998 as a commercial exhibition space for local and regional artists; it then changed its mission in 2007 to become a nonprofit platform encouraging creative thinking and nurturing cultural and artistic production. The gallery operates in a communal structure formed by volunteers, artists and interns to develop education and artist–in-residence programs, workshops, talks, screenings and exhibitions.

For the opening of its temporary space at Al Aali Shopping Complex in March 2009, ARG organized a daring show entitled The Ultimate Experience, with the subject of consumer culture effects on the society. The show consisted of video, photography, mixed media works and paintings from emerging local and international artists. The totality of the exhibition led to an essential critical dialogue on compulsive consumerism in the Gulf, underlined in a talk that followed the opening.

Currently the gallery is closed for renovation of its old premises in Adliya. Meanwhile it has created the First Bahrain & Al Riwaq Street Art project, where each month a young talent is invited to paint on the outdoor canvas covering the construction site. As for ARG’s reopening in November this year, Bahraini multidisciplinary artist Waheeda Malullah is scheduled to have her first solo show.

Another reputable art gallery is Albareh. Founded by Bahraini art patron Haifa AlJishi in 1998, the gallery’s mission is to encourage fresh perspectives bringing together different cultures and art trends. In addition to its exhibition space, the gallery has two art studios, where workshops are regularly conducted for adults and children. Screenings, lectures and group discussion meetings such as Elham’s are also held on its premises. Albareh continues this year to focus on local and Middle Eastern artists. It brought forward the promising young Bahraini multidisciplinary artist Mariam Haji as well as showcasing established names from the Arab world. Currently the gallery is showing works by the Algerian artist Hamza Bounoua until the end of November. The gallery has plans to expand for next year’s program, soon to be announced.

While art galleries and governmental institutions are mushrooming in Bahrain, local contemporary artists and independent art professionals are still facing major difficulties. Society’s lack of exposure to contemporary art and the non-existence of art schools have pushed many young people away from pursuing a serious career in this field. Additionally, the generation of artists emerging in the last 5 years continues to compromise in the early stages of their work by accepting approved formats in order to keep working. Nevertheless, this proliferation of museums and cultural governmental plans is slowly triggering the creation of alternative structures that make contemporary and independent art communities more present, productive and daring.

Independent art curator, based in Beirut, Lebanon, and in Bahrain.