Video for the trash metal band Seringai from Jakarta, a woodcut animation made of 450 boards.

Music videos as an influential aesthetic form were embraced by cultural institutions as early as the late 1980s. Spawned by MTV’s coming of age, music video has come to cross over into art with work by artists such as Laurie Anderson and Pipilotti Rist. In 2003, Sonic Youth’s Kim Gordon was invited by the Museum of Modern Art in New York, alongside Anderson and Rist, to curate a selection of music videos from between 1965 to 1985 [1]. Such precedents have allowed younger artists to experiment with the form and come up with their own formulations.

Formed in 2004, Tromarama is a tightly knit group of young artists coming from design backgrounds, who are now actively using music videos as a site for exploring various media. By employing the stop motion technique in animation, the group has produced three music videos for bands in a range of genres (indie, jazz and thrash metal). Tromarama’s videos are characterised by their use of unlikely materials and techniques alongside the language and media of high technology. In a recent video made for the indie band RNRM, they used buttons, sequins and colourful beads to animate the band. The result - a rich and shimmering moving canvas. All their music videos are marked by the implicit monotony necessary to the craft and the method of stop motion.

The video Serigala Militia (2005-2006) was produced for a thrash metal band from Jakarta, Seringai (which means ‘grin’ in Bahasa Indonesia). Their music, heavy, noisy and gritty, is a subgenre of heavy metal music. Thrash metal lyrics are often directed to social issues coupled with an attitude of aggression. Tromarama’s video for Seringai utilised 450 plywood boards to create a woodcut animation. The rough grain of the wood and that of the etching’s unevenness associated with the metal group’s music typified by their use of high-speed guitar riffing. The video (the song is dedicated to Seringai’s fans) has an almost nostalgic quality with its sepia tone, despite the bluntness of the music. The perfectly smooth transitions belie the work behind the images. In the Biennale, these boards are installed together for the first time, and the whole room becomes the storyboard for the video. Tromarama recognise that their work has a continuity outside the space of the monitor and the video installation becomes the context wherein the video is to be seen and experienced. The clandestine tricks of technology no longer hide the rough movements in between transitions, the mistakes are there in full view. Here too, however, we can explore the work frame by frame, present at the moment when music, craft and technology are bound together in what has now become a commonplace feature of contemporary culture - the music video. 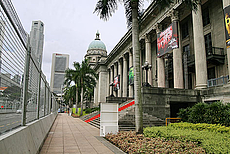