Photo tour through the exhibition in the Old City of Jerusalem, July 2008. Artists from Palestine and other countries. 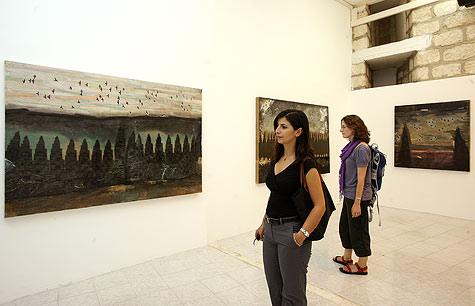 The Jerusalem Show, Edition 0.1 showcased works of 26 artists from Palestine and other countries in the Old City of Jerusalem under the theme of "Walks in the City". The artworks encompassed a variety of media, including photography, video, painting, performance, and sculpture, and were installed throughout the main quarters of the Old City in the streets and alleys, on the Old City walls, at youth and community centers, playgrounds, on roof tops etc.

Part of the Show were also two youth art workshops (sculpture and new media), and a program of events, including guided tours through the Old City of Jerusalem, video and film screenings, and performances.

The Jerusalem Show is an annual project - the edition 0 was undertaken successfully in October 2007, and operates in cooperation with local and international institutions.

Nafas Art Magazine thanks Axel Weissenfels from the Al-Ma'mal Foundation for his commited cooperation in providing the information and images.