Private initiative, exhibits UAE art, incl. some of the pioneers of the experimental movement. 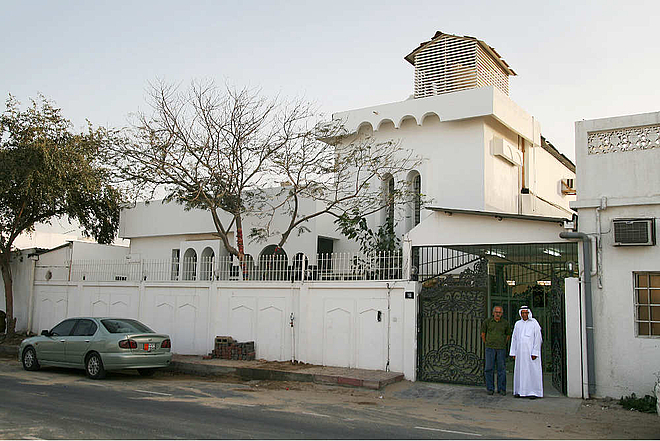 An evening mood in Al Quoz, one of the many residential districts in which one feels nothing at all of the hype about Dubai. From the roof of the three-storey house, one’s gaze pans over the antennas and water tanks on the neighboring buildings, interrupted here and there by palm fronds. The muezzin’s call to prayer intones from the loudspeakers of the surrounding mosques. But if one looks in the other direction, the skyline of the hypermodern Dubai that wants to soar as high as possible gleams in the mild light of the evening sun. The Burj Dubai, the incarnation of hubris, already stabs like a needle more than 600 meters into the sky, but another 300 meters are to be added before the Tower of Dubai is finished – for the time being…

Forty large metal transport crates, dusty and somewhat weathered, are jammed close together on the flat roof terrace. They could easily be taken for a work of art in the successorship to Beuys. But the containers served only the storage of art. For more than two decades, they were in a warehouse in neighboring Sharjah, gradually filling and increasing in number. Now they are empty, and the building is chock-full of all the paintings, drawings, photographs, installations, objects, and documentations of Concept Art, Performances, and Land Art. Glass showcases have been embedded even in the tile floors and stairs in the entrance area – in a manner as well thought-out as the presentations in most of the rooms, however cramped they sometimes are.

A substantial part of the creations of nine artists from the United Arab Emirates is gathered here. Most of it is by Hassan Sharif, his brother Hussein, Mohammed Kazem, and Mohamed Ahmed Ibrahim, who are among the country’s best-known artists. The artistic value of their works has long since been attested in many exhibitions at home and abroad, as well as through publications and other acknowledgments, but private and public collections in the Emirates have been slow to respond. Hassan Sharif is the key figure of a circle interested in experimental approaches. He folds, glues, binds, and knots rustic objects out of “ignoble” materials like cardboard, plastic cups, packaging, and remnants of cotton. In photos, videos, performances, and installations, Mohammed Kazem analyzes psychosocial aspects of his own and other people’s lives or plays with numbers and coordinates. Mohamed Ahmed Ibrahim, by contrast, is down-to-earth in a completely different way: by creating Land Art in the stony landscape near his home region, Khorfakkan, or by making sculptures out of grass, paper, paste, and soil. These three examples are enough to show that such art hardly corresponds to conventional desires for superficial beauty and impressiveness.

Fortunately, the businessman Abdul-Raheem Sharif was already far-seeing enough in the early 1990s to store and document the art production of his two artist brothers and of some of their friends. For lack of space, the latter themselves could hardly have lastingly preserved their works. In August 2007, when Abdul-Raheem Sharif, Mohamed Ahmed Ibrahim, and the Dutch artist and curator Joos Clevers – a close confidant of the group – visited the documenta 12 in Kassel, Sharif resolved to set up his old residence as a home for the art buried in the crates. After considerable initial remodeling and substantial investments, it was opened in January 2008 as The Flying House.

Beyond its function as gallery and documentation center, The Flying House aims to foster the production of its associated artists and to make them better known both nationally and internationally. At the Art Dubai in March 2008, visitors experienced its élan and professionalism. The seat of The Flying House in Al Quoz was regarded as a hot tip; word quickly spread and led to a massive stream of visitors.

The artists from The Flying House were also represented in several places in the city. In the framework of the Art Projects of the Art Dubai, installations by Hassan Sharif and Mohamed Ahmed Ibrahim were shown in Madinat Jumeirah, the art fair’s event venue. The whole group presented itself in a double exhibition in the foyers of the Dubai International Financial Center (DIFC). At the Creek Art Fair, The Flying House staged its own showing in one of the historical buildings in Bastakiya district (more on the exhibitions in the illustrations section).

It is only a matter of time until the transport crates on the roof of The Flying House are themselves processed into art. Hassan Sharif says that would then be a group piece.